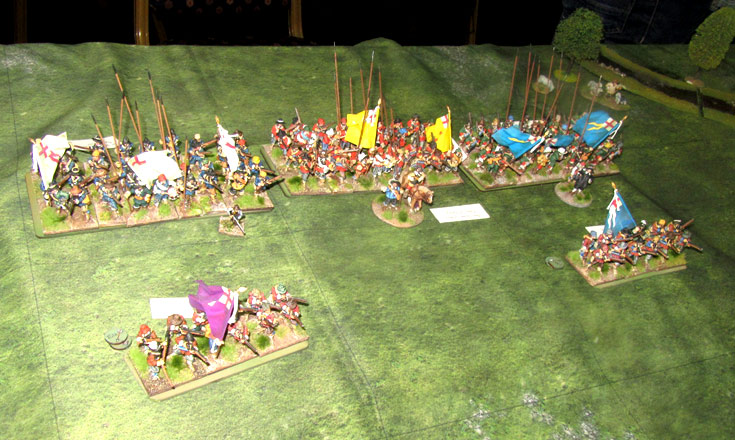 This was something of a big day. Several months before, Ken and I playtested these rules, written by Simon Miller and Andrew Brentnall. This week, we were using the finished rules, which have just come out. Back when we ran the playtest, the battle we were given to try was Montgomery. Now its the scenario included in the rules, and so replaying it seemed the thing to do.

Now, For King & Parliament is based on Simon’s very popular Ancient rules, To the Strongest. While the basic mechanics are the same, there’s a fair bit that’s different, with a few new mechanisms to get our heads round. Still, Ken & I diligently read them before the game, and off we went.This wasn’t too hard, as the rules are unusually well-written, and we already knew To the Strongest . These games are played on a grid – we used 20cm squares – but in these pictures you’ll have to peer closely to see it. The field was laid out as close as we could to the map in the rule book (below), with the Royalists and the top and the Parliamentarians at the bottom.

This wasn’t a straight-up battle. The Parliamentarians were outnumbered. Campbell and I had six regiments of horse, three foot ones, and two “forlorn hopes” – essentially small groups of musketeers. Ken and Alisdair had five Royalist regiments of horse, six of foot, and three “forlorn hopes” made up of dismounted dragoons. However, three of the Royalist cavalry regiments were “untried” in battle, while two of ours started off the table, foraging. So, both sides had slight disadvantages to deal with.

The battle began with the Royalists moving first. They plodded forward, while their cavalry massed on their right flank, ready to launch a charge. My foot stayed where they were, while Campbell gathered his four regiments of horse together to check the Royalist tide. Still, it was Ken who charged first, as Col. Trevor’s (R) and Sir Thomas Myddleton’s (P) regiments collided. After short sharp fight, Trevor’s horse were routed from the field. First blood to Parliament! Huzzah!

Of course, this was only the start. It turned out that Ken’s “untried” Royalist horse were actually pretty reliable. They trotted into action behind Lord Byron’s regiment (R), which smacked into the Derbyshire Horse (P) and drove them from the field. Led by the Royalist CinC (and regimental colonel) Lord Byron  they didn’t pursue the broken enemy, but instead they rallied and turned 90 degrees, so they could roll up the flank of the rest of Campbell’s cavalry.  That’s Ken above, finding time to tell Alasdair what to do with his foot.

So, back in the infantry fight the Royalist advance was met by volleys from my two small units of forlorn hope, out in front of my line. Behind them my three outnumbered regiments lined the edge of a small hill, and awaited the onslaught. I was cheered when one of the forlorn hopes saw off one of their three Royalist counterparts – all detachments of Col. Washington’s dragoons.

Back on the cavalry wing our reinforcements  still hadn’t appeared. Then, in a flurry of action the two lines clashed again, although  Byron’s horse refused to charge home. Much to everyone’s surprise two of the Royalist horse, Tyldesley’s and Lord Molyneaux’ regiments, were swept from them field. Double Huzzah! Over in the centre, Myddleton’s regiment, accompanied by the Parliamentarian commander Sir John Meldrum, rode down a unit of dismounted dragoons, and then faced off two units of Royalist foot, which kept them from outflanking my foot on the hill.

So, in the cavalry fight the Parliamentarians had three units left, and the Royalists had two. Our Parliamentarian reinforcements could have added two more, but in fact they never bloody well showed up throughout the game! By now, Brereton’s horse (P) had turned to face off Lord Byron’s regiment, while Fairfax’s regiment (P) charged at Vaughn’s (R). Ken’s run of cards continued, and he lost both melees – and both units. So, the Royalist cavalry had been wiped out, and their army’s commander Lord Byron was forced to gallop over to the safety of his own foot regiments, to avoid capture.

In For King & Parliament you get victory medals at the start, based on the size of your army. Each time you lose a unit or a leader you hand medals to the enemy. Ken started with 14, and we began with 13. We Parliamentarians were now down to 10, as we’d lost a unit of forlorn hope (-1 point), and a unit of horse (-2 points), while the Royalists were down to 1, as they’d lost five regiments of horse (-10 points), a colonel (-1 point), and two small forlorn hopes of dismounted dragoons (-2 points). So, just one last push…

I was happy to line the top of the hill and shoot, and as the Royalist casualties grew Alasdair decided that one big charge could win the day. However, only Col. Broughton’s Tercio (R) actually charged, and it soon got pushed back. Then, my musketeers finally caused enough casualties on the Col. Warren’s Foot (R) that it broke and ran. That garnered us 3 medals, and the game. Huzzah all round!

It was a hard-fought little fight, and we all thoroughly enjoyed it. Towards the end a bunch of other gamers drifted over to watch us, as they’d all played To the Strongest, and wanted to see how the new rules worked for this period. Actually, they worked very well indeed. Everyone felt the game moved along very well, and that the rules worked superbly. Even more importantly, everyone enjoyed themselves – even Ken, who had a run of cards that turned averages and statistics on their head!