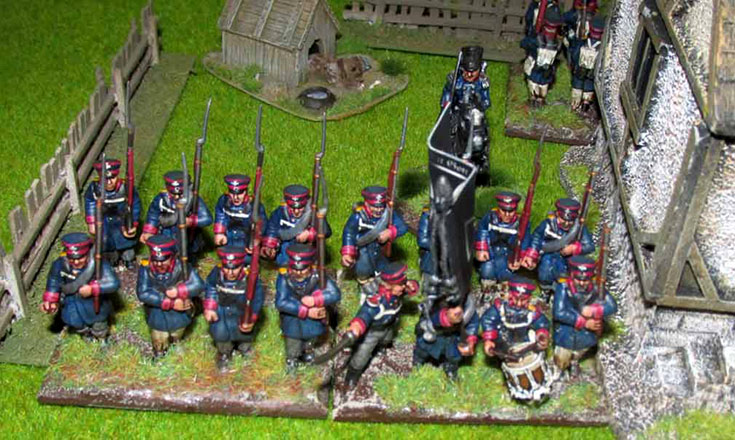 This was another Napoleonic game where we’d drawn on a Charles S. Grant scenario – this time a “Tabletop Teaser” published in Battlegames (now Miniature Wargames magazine). The idea was, two armies were approaching the same area, and needed to control an important road, running from north to south. Lateral roads from east and west joined this main road at the small village of Kuchendorf, and control of the place now became vital for both sides. In this game our forces were fairly evenly matched – both the French and the Allies had two brigades of infantry (four battalions each), two brigades of cavalry (two regiments each) and a pair of gun batteries. The picture above shows the calm before the storm, as the advanced guards of cavalry arrive at Kuchendorf simultaneously – the Prussians and Russians from the east, the French and their remaining German allies from the west. The rest of both armies began entering on their respective lateral roads from Turn 3 onwards.

The Allies reached the town first, with a regiment of Prussian landwehr cavalry and another of Russian hussars. The French had a regiment of hussars and another of chasseurs-a-cheval. Strangely both sides decided to face each other off until the infantry arrived, but the waiting got too much for the 7th Hussars, who decided to charge the landwehr cavalry. Predictably the landwehr were routed in fairly short order, but by that time the rest of the two armies were arriving in the vicinity, and the hussars suffered casualties from musketry as they pulled back to regroup. In the town itself the Prussians sent their fusiliers and landwehr infantry into its eastern side, while the French marched up the main road in column, while two battalions of Westphalians occupied the village’s western side. things were starting to hot up.

The French cavalry commander decided to cover the withdrawal of his hussars by launching a charge with the 19th Chasseurs at a Prussian musketeer battalion in line. The cavalry suffered enough casualties to force them to falter, and as they stood there the Russian Polski ulhan regiment charged into them. The Chasseurs were forced to retreat, and an exploitation charge saw the ulhans cannoning into the back of the retiring hussars. Within a turn the French cavalry were in headlong retreat, but the Russian ulhans were now stranded in the midst of a sea of French infantry columns. Oops.

They were so numerous they didn’t even bother forming square – after all, a mass of columns doesn’t have much in the way of flanks. Back in the village French voltigeurs were busy driving back the Prussian fusiliers, while in the main street the Russian Marioupol hussars charged a column of French infantry. If this all sounds a little chaotic its because it was – just about every unit on the table was now congregating around the village, and hacking away at each other.

Over to the north the French horse artillery caused some casualties to the Russian hussars as they wheeled into the village, while the French 2nd Lancers caught up with the routing landwehr cavalry, and chopped them to pieces. However, they then fell back behind their own lines to regroup, effectively handing the initiative over to the Allies., A Russian reserve unit of cuirassiers forced back the Berg lancers, and so on that side of the table both sides pulled back, regrouped and squared off for another cavalry fight. To the south of the village a Prussian gun battery had deployed to the south of a small wood, and was effectively keeping the French infantry at bay. It was still all to play for…

Back in the village itself the Prussian fusiliers and landwehr infantry grimly held their ground, while the Russian hussars were forced back by the French infantry column. Again it didn’t go into square – there wasn’t any room to do anything other than stand in column and fight. The French heavy guns were rather ineffectively stuck behind the French infantry to the south of the village, and thanks to the congestion they weren’t going to come into action any time soon. This gave the Allies a slight edge in firepower, and as the Polski ulhans withdrew the Prussian artillery and infantry blasted away at the massed columns to their front. Meanwhile, the Russian infantry brigade was now entering the town, which relieved some of the pressure on the poor Prussians.

This, I’m afraid, is where we left it. The game was still in full spate, but we’d had a late start, and it was now the witching hour. With hindsight of course we had far too much lead on the table – a brigade or two less per side would have given us a nice conclusion. Still, with six players we felt we needed to give everyone a nice sized command. Who knows what would have happened in the town if we went on, as both sides were piling in reinforcements. it certainly promised to be something of a bloodbath Perhaps one day we’ll set it up again, and start from where we’d left off!