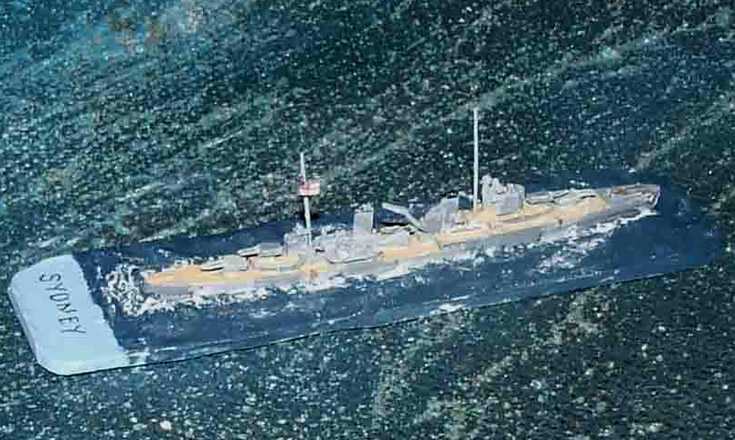 The grandly-named Battle of Cape Spada was a meeting engagement, named after the headland which marked the north-west corner of the island of Crete. Just over a week before Mussolini’s Italy had declared war on Great Britain and France, and two days earlier, on 17th July, two Italian cruisers put to sea, in an attempt to intercept British convoys sailing between Egypt and Greece. Instead they met a force of four British destroyers.

The game picks up there, at dawn. We changed the names of the Italian cruisers to reflect the ships we had available, but otherwise the encounter was a historic one. Inexplicably the destroyers raced away to the north, and the two Italian light cruisers set off in pursuit. An hour later the reason for this evasion became clear – the fog lifted, revealing the Australian light cruiser Sydney, escorted by another destroyer.

The battle proper began at 08:20 hours, when the two sides opened fire. By that stage the range was down to just a few miles, which gave the Australians the edge – the “rapid fire” rule allowed the Sydney to fire its 6-inch guns at a higher rate for a short period. By the end of it the first Italian cruiser – the Luigi Cadorna was a blazing, sinking wreck. However, the Italians struck back. The Alberico de Barbiano scored several critical hits, knocking out three of the Australian cruiser’s four gun turrets. She lost two of her own 6-inch turrets too, and her director control tower was knocked out, making it difficult for her to score any more hits.

By that time though the British destroyers had returned to the fray, and the Italian cruiser turned and ran towards the table edge, trading Parthian shots with the destroyers as it went.The destroyers of course were also armed with torpedoes, and for several turns the Barbiano dodged salvos. Then, at 09:05 hours she was struck by a salvo fired from HMS Havock, which struck her on her starboard side. The Italian cruiser was ripped apart, and she sank quickly, as the British destroyers moved in to pick up survivors.

The best thing about the game was that for a month now Dougie Trial has been obsessed with gaming the naval War in the Mediterranean, and has been boring anyone prepared to listen about the merits of the Italian Navy. This was his first baptism of fire, when his ships were taken apart with clinical precision by the Kevan Gunn and his “rapid firing” Sydney. Dougie’s lamentable excuses were sweet music to our ears – and of course you can’t expect too much from anyone who champions the Second World War Italians and wears a Kermit T-shirt…

As for the rules, General Quarters (3rd edition) performed very well, and no doubt Dougie will have learned to keep the British at a longer range next time round. Our only real problem with the new rules lies with the use of torpedoes – its now very difficult to score a hit, unless the target is virtually dead in the water. In the end the Barbiano was pummelled by gunnery rather than torpedoes, and only finished off by torpedoes when her top speed had been reduced to a mere 10 knots. Still, it was a good, tense, lively game, and no doubt Dougie will have his revenge – or try to.