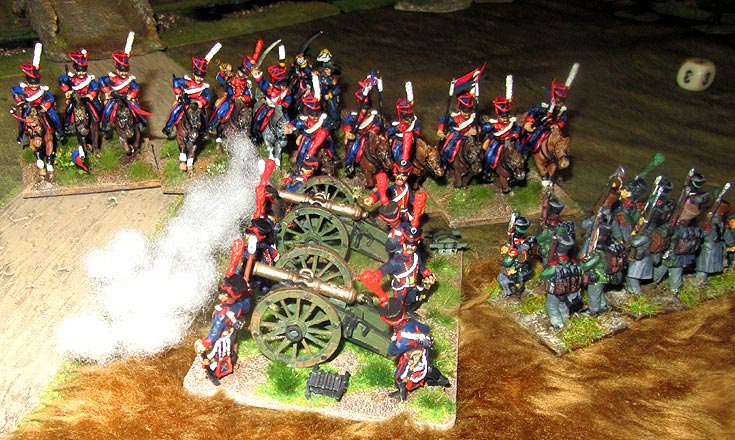 This week we decided to try out a new set of Napoleonic Rules. These were produced by Partizan Press, and were written by Keith Flint. I’d heard some good things about them – they were meant to be fast and fun – just what I like in a game – while also giving a reasonably historical result. Anyway, this scrap was really all about four of us getting together to give them “a run around the block”. 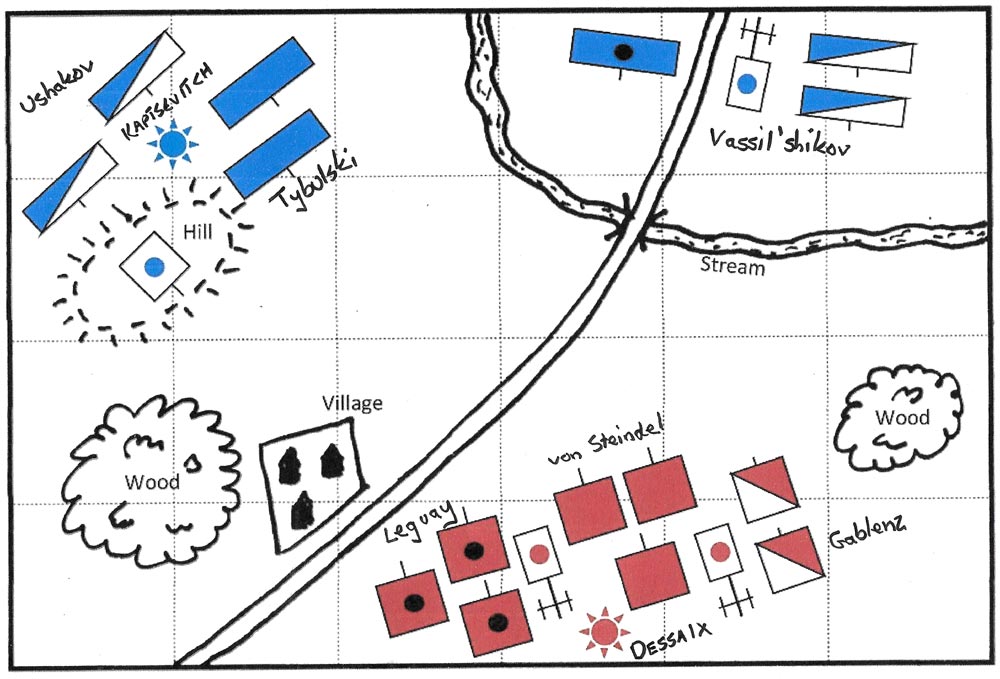 Thanks to Dave Ryan of Partizan Press for letting me use the image, culled from the rule book, but with names added.

The scenario was taken straight out of the rule book – Scenario 1 – which had one force attacking the enemy which was divided by a small river or stream. For this game, the attackers were French and their Saxon allies from Reynier’s VII Corps, while the defenders were Russians, part of Tormassov’s 3rd Army.We set the game midway between Brest-Litovsk and Pinsk, just above the Pripet Marshes, in late July 1812. Part of the Russians were behind the village of Anatol, while the rest were on the opposite bank of the easily fordable headwaters of the Mukhavets River. We laid out the table based on the scenario, and played on a 6×4 foot table. 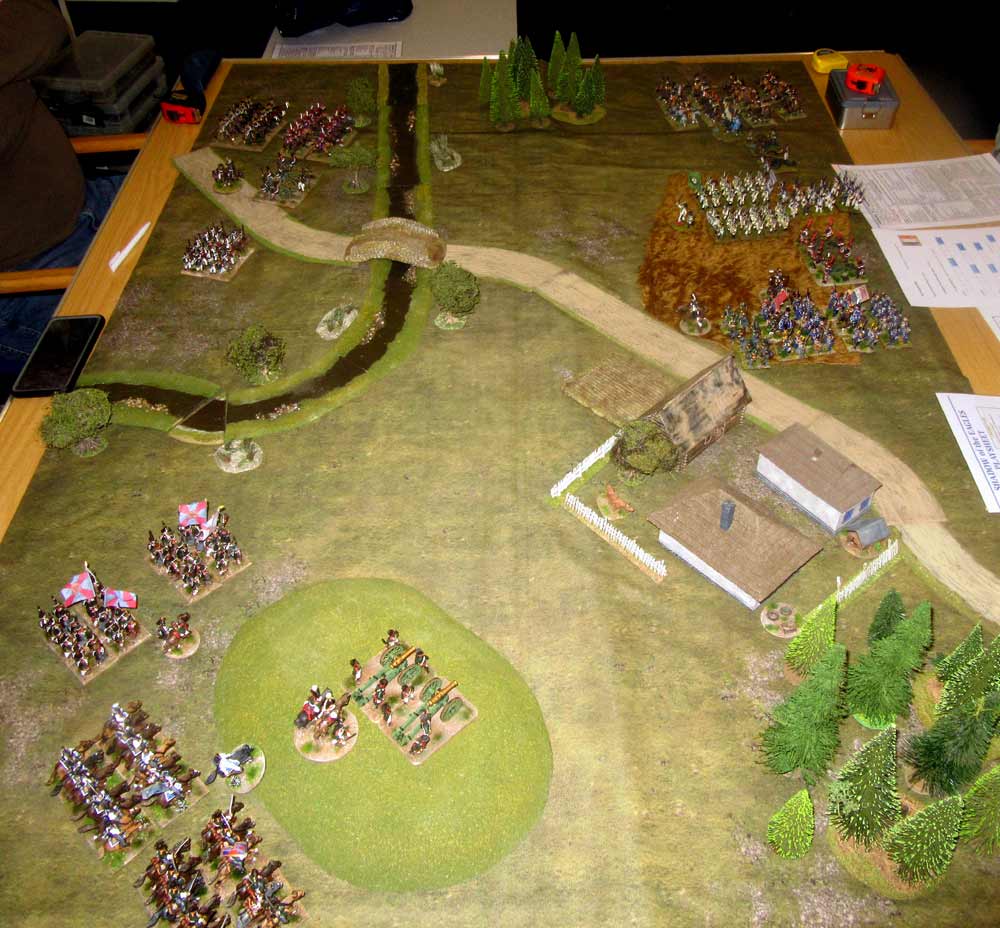 For this game, the French and Allies were played by Gyles and Mally, using Gyles’ Saxons and my French. They had two brigades, each of three infantry battalions, a cavalry brigade of two light cavalry regiments, and two gun batteries – one French horse artillery, the other a Saxon foot battery. The whole lot were commanded by General de Division Dessaix. 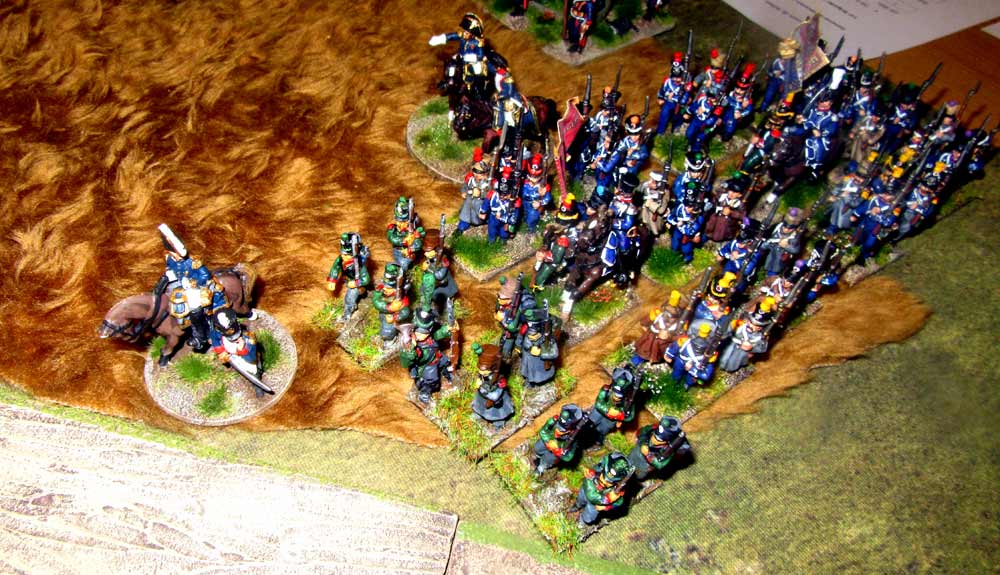 The Russians, commanded by Sean and I, had a light brigade of two light cavalry regiments, a horse battery and a battalion of jaegers behind the river, while my main force under Major General Kaptsevitch was deployed behind the village. I had two infantry battalions, a heavy brigade of two heavy cavalry regiments, and a position battery of foot artillery. In this one, the French were on the offensive. 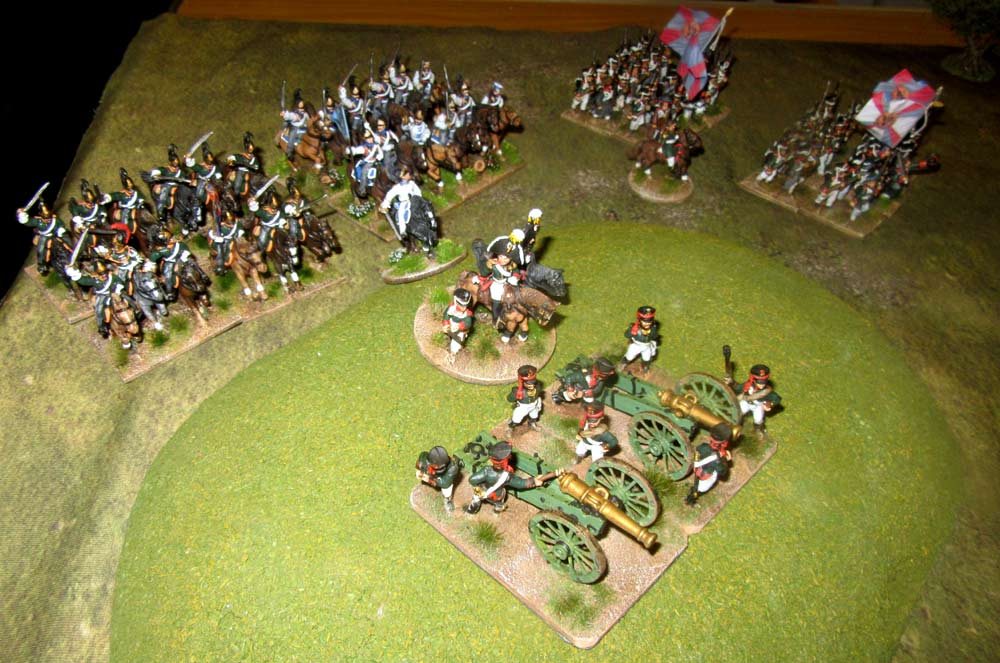 The attack began with von Steindel’s Saxon brigade of three infantry battalions heading straight towards the river, while Gablenz’ light cavalry brigade skirted a wood on the right flank to deploy into line facing the river. On the French left, Mally moved up in support with Leguay’s three light infantry battalions – two French and one Saxon. His guns deployed to fire at my troops on the hill, but generally this was a blocking force. Gyles planned to decide the battle along the line of the river. 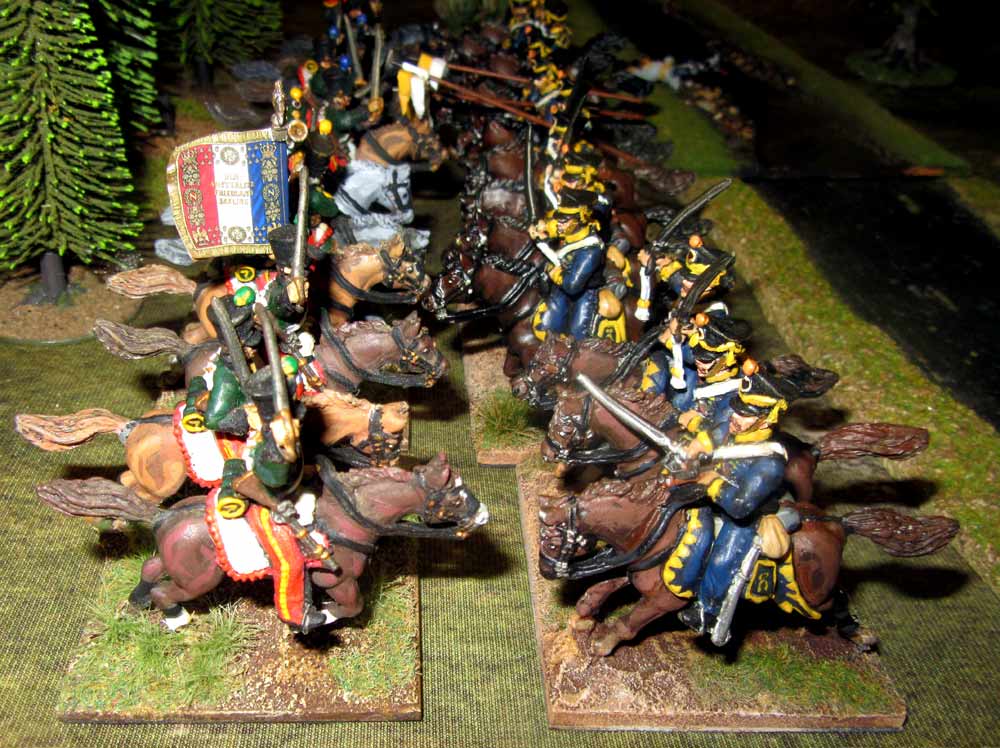 Now Sean, commanding Vassil’ shikov’s light brigade is often a slow-moving player – he likes to weigh things up before committing himself. This evening though, he really hit the ground running. For a second both the French and the Russian hussars faed each other along the river, then the French cantered into the water. The Russian Marioupol hussars counter-attacked, and the hacking began! The Russians had the slight edge in the melee, and the 7th Hussars retired, while their Russian counterparts chose not to pursue. 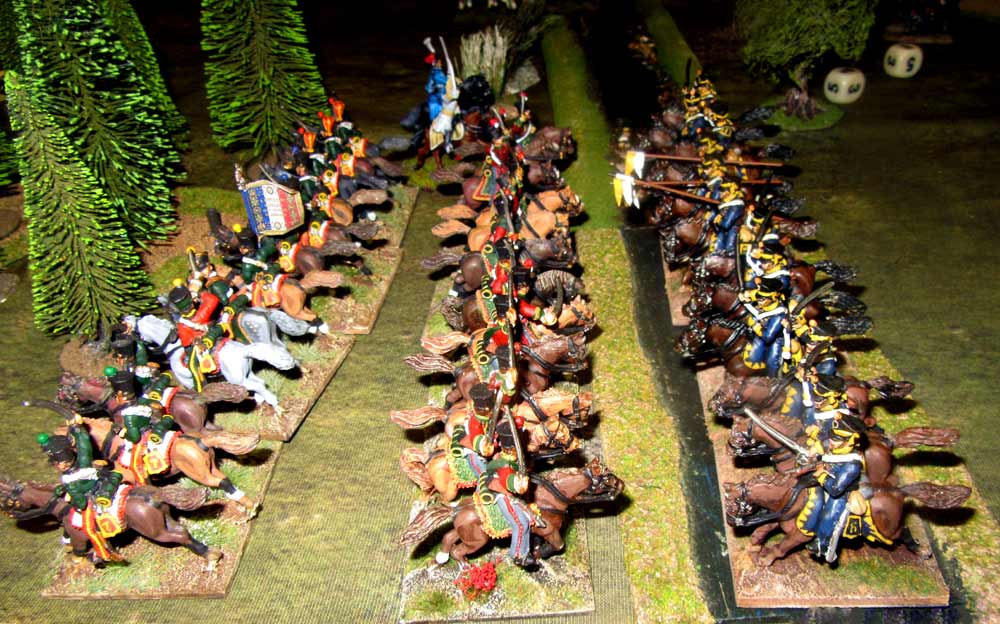 Undeterred, Gyles tried again with his Saxon chevaulegeres.  The result was just about the same though – both sides had pretty much exhausted themselves in the fight, and both were now “weakened”, which meant neither unit could advance. So, both Gablenz’  brigade and the Russian hussars spent the next two turns facing each other across the river, trying to rally themselves. Gablenz himself was unhorsed and wounded though, which hindered the French slightly. 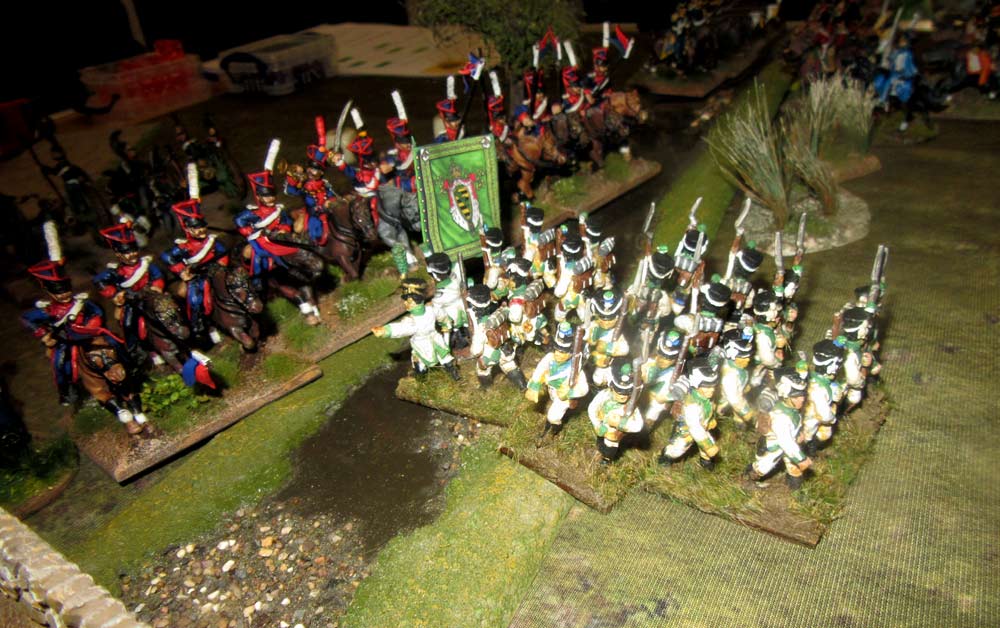 That though, meant that Sean had his light battalion, his horse artillery and his Polish ulhan regiment to face off the Saxon infantry. The fun began when the right-hand Saxon battalion started to cross. It had been fired at by the horse guns, but they hadn’t suffered too badly. Then Sean charged them with his lancers. They managed to form an emergency square though, and the cavalry were bounced. That though, just exposed the square to the Russian guns. Casualties mounted, so they formed back into line. That was when they were charged again. This time, they managed to form square, but it was a half-hearted affair, and the ulhans broke in. 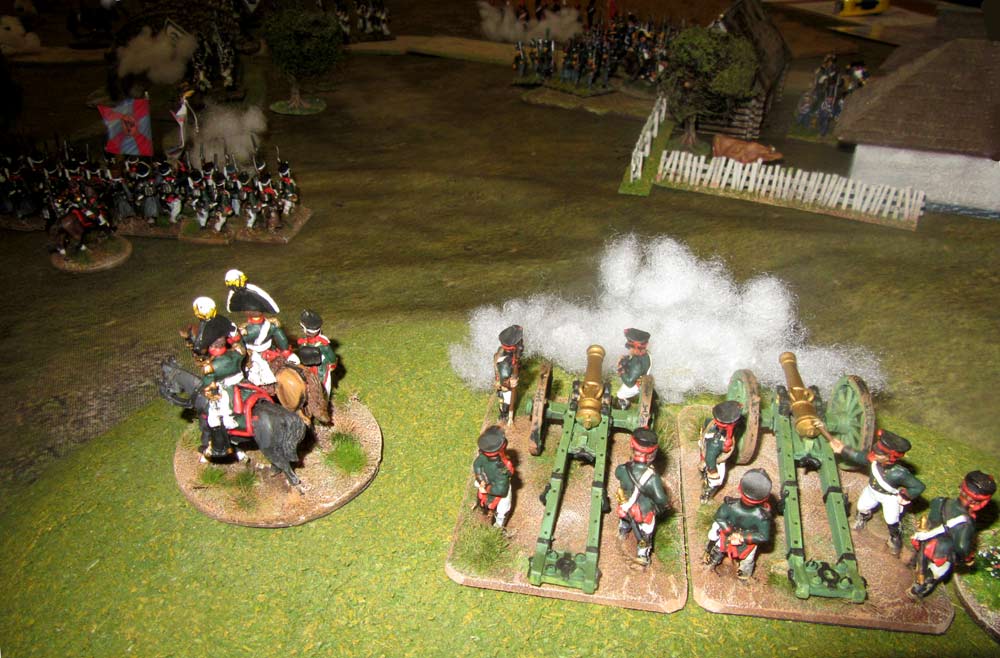 That was the start of “the charge”…  The Saxons were forced to retire, but were charged again in the pursuit phase, and this time they were routed. The Polish ulhnas reformed, then prepared to charge somebody else. Meanwhile, on the far bank of the Mukhavets the Saxon Prinz Friedrich Regiment had crossed, and was firing at the Russian 32nd Jaegers. However, my own two battalions of the Chirvan regiment began firing into their flank from the far bank. Soon, both Saxon battalions were “weakened”. Then, when the Russian horse battery began firing canister at them, they broke and ran. Von Steinmetz was captured in the process. 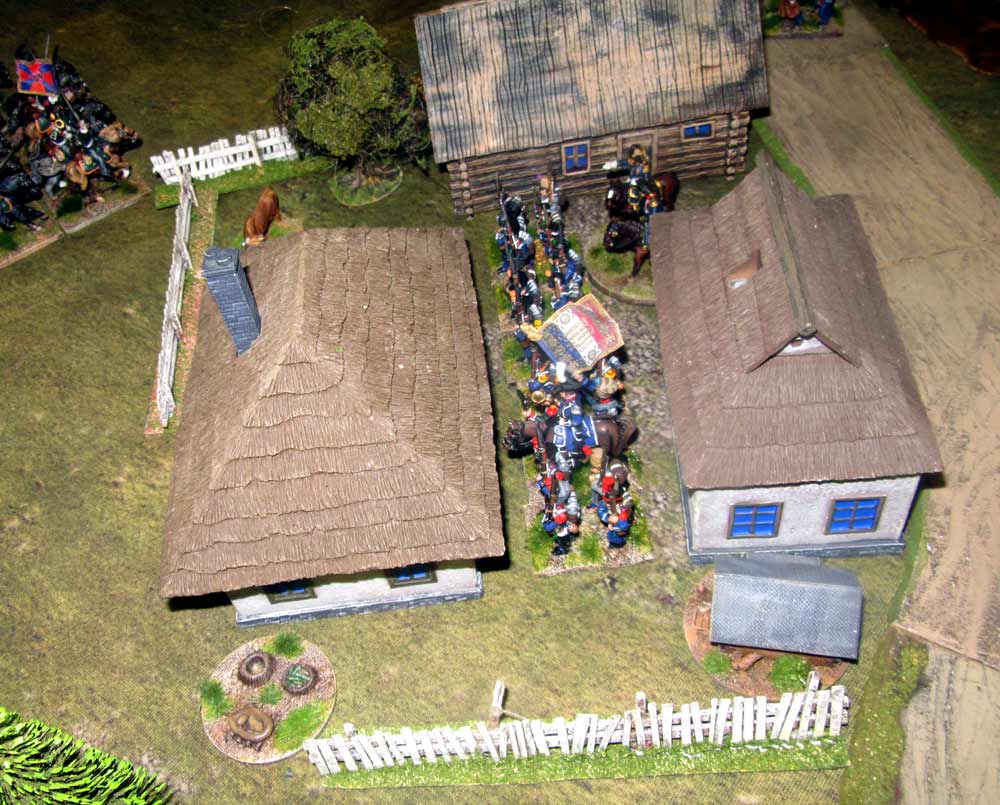 By now it was clear that the French were losing the game. Throughout all this, Mally’s troops had successfully held off my wing of the Russians, but the breaking of the Saxons left him high and dry. His left flank was anchored on the village of Antolpol, but he now had to face threats from two directions. My own cavalry started to move forward, covered by my position battery, which had been firing steadily all game. Now though, the French didn’t have cavalry of their own, as their light brigade was still licking its wounds.

At that point, Sean unleashed his ulhans again, This time their target was the Saxon light battalion, attached to Leguay’s command. this time the Saxons didn’t manage to form square in time, and the result was quick and bloody. This last Saxon battalion were routed, and the Russian lancers piled into the French horse battery which now lay in front of them. Unable to fire, it was ridden down. 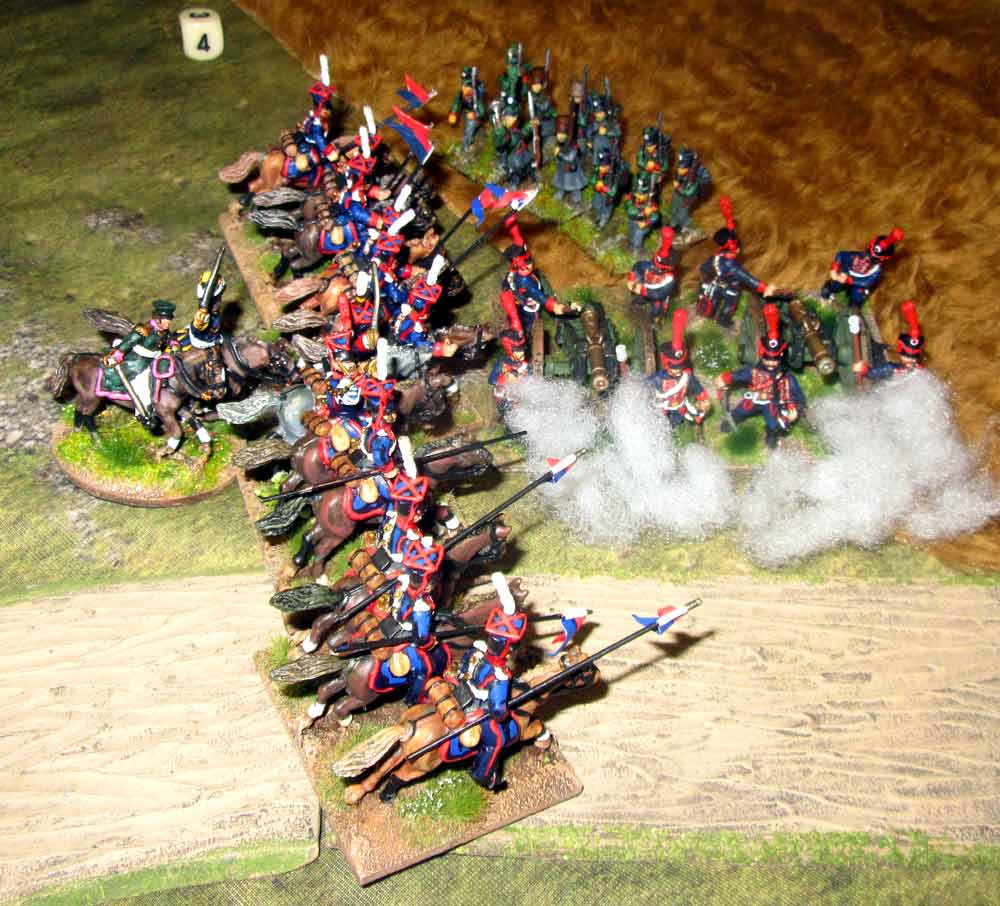 With that the battle was all but over. The French and their allies had lost four infantry units and a gun battery – half their army. This meant they’d lost the game. Surprisingly though, both Gyles and Mally said they’d really enjoyed the game. Sure, we had to stop and look things up all the time, but the game flowed really well, and the system was both simple and easy to pick up, while also producing sensible results. So, the consensus is that Shadow of the Eagles is something of a winner, and certainly well worth another outing. 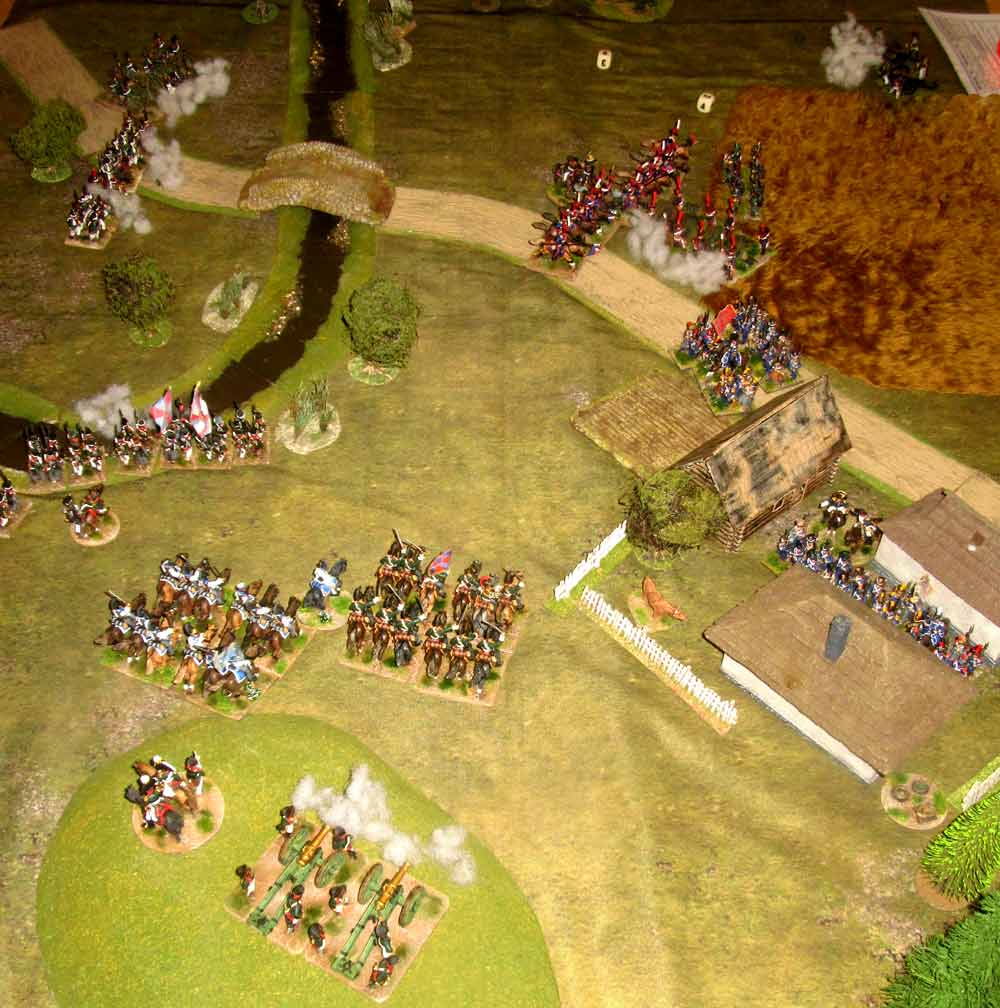