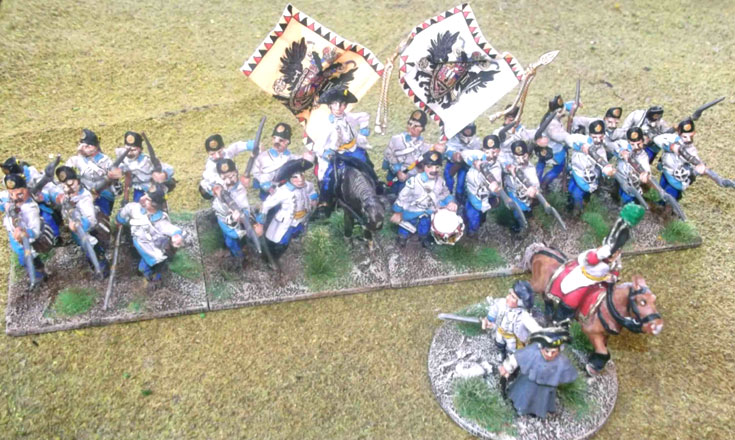 In last month’s “Bonaparte in Italy” we used Warfare in the Age of Napoleon, which is quite good, but a little quirky. This time we played the game using the tried and tested Black Powder. Actually, it was only tried and tested by me – Angus – the other two players Chris and Mark – hadn’t even seen the rules before. So, as this was a learning curve, I took the Austrians, and launched them against the French, which gave the two guys a chance to learn the ropes without worrying too much about what to do. They just had to stop the Austrians in their tracks – something they managed quite nicely thanks very much!

One French brigade (three battalions, a gun battery and a small unit of skirmishers) were deployed well in front of the village of Allegro, which was the oh so distant Austrian objective. A second French brigade commanded by Mark was marching forward in support, heading towards a small hill on the Flank of Chris’ brigade. Their belief in the new rules was tested to the limits on turn 1, when the Austrians rolled very low for their Command dice, and moved three moves. We were using the printed movement rates – in future we’ll scale these down by a third for a small 7×5 foot table. Anyway, the Austrians streaked forward, with a regiment of hussars occupying the vacant hill, and a column of four battalions forming up for an assault on Chris’ defended line. A second brigade followed the hussars.

The French players’ incredulity at this wonder-move was tempered when Mark’s brigade also raced forward, and the chasseurs-a-cheval moved into position to charge the hussars. In the ensuing cavalry stramash the Austrians were forced to retire, and so the hill fell to the French. A turn later Mark’s demi-brigade was perched on top of it, defying all comers.

The Austrian luck in rolling command dice evaporated when on that far flank the brigade facing the hill took the next three turns to move forward in a generally threatening way. However, this had now become a feint. As they lacked the manpower to recapture the hill, the Austrians – er, me – decided to concentrate on the French right flank, where Chris’ brigade was fending off my attacks.

The Austrians broke a French unit defending a walled enclosure, and a gap appeared in the French line. Having recovered from their earlier whipping, the Wurmster Hussars were joined by the Erherzog Josef Hussars, whose blue-coated riders charged through the gap, and forced a waiting unit of French grenadiers to retire. Actually they were already retiring thanks to Austrian musketry, and they now offered a tempting disordered target. Unfortunately that was when my cavalry refused to move. For two crucial turns they steadfastly refused to budge, as the French fired into their flanks. After accruing an unhealthy number of shaken and disordered markers they pulled back to lick their wounds.

Meanwhile the French cavalry commander issued a “Follow Me” order and streaked down the road, and the unit charged into the flank of two battalions of Austrians, just beyond the little walled enclosure. Amazingly Chris’ luck then deserted him, and his appalling dice roll meant that the Austrians stood their ground – even though their lines had been hit in the flan k – and the chasseurs-a-cheval high-tailed it back towards the safety of their own lines. that though was the last Austrian success of the day. The Austrian grenadiers refused to charge the hill that formed the heart of Chris’ position, and with the French grenadiers and cavalry now reforming the gap in the French centre was closed. At that point we had to pack up, but it was clear that the Austrian attack had failed. Victory was duly awarded to the French.

Initial reservations about Black Powder evaporated during the game, as the players learned more about how the rules work. Mark prefers the greater complexity of General de Brigade, as he’s a true Napoleonic buff, but for a Sunday afternoon game Black Powder worked well, despite Chris’ initial accusations of turbo-power (three move advances), teleporting (interpenetration) and magical force fields (repulsing the French cavalry)! Mark’s enthusiasm increased when his gun managed to wipe out two of my units in two turns, thanks to forcing break tests on them. All in all it was a good day’s gaming, and we’ll certainly try out Black Powder again. The French by the way were on loan from my pal Chris Henry, while I have the Austrians. Chris has threatened to take them back in late June, so I have until then to paint up replacements for them. That’s quite a daunting challenge, as I’m also in the throes of painting up Frenchmen for the later Napoleonic wars. I’ll be busy!