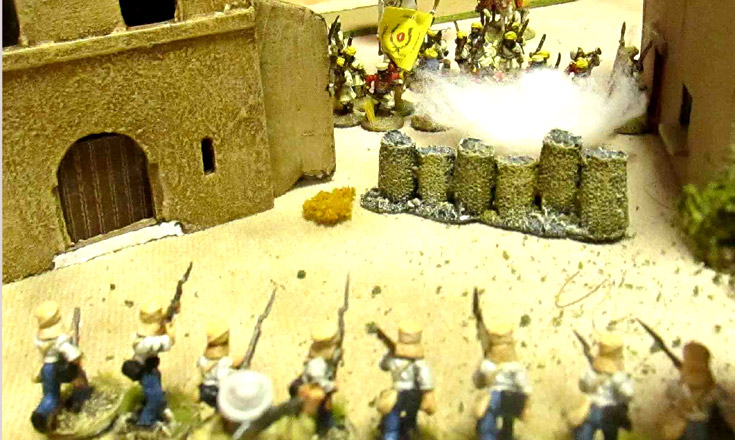 This – our second Indian Mutiny game in two weeks – was something of a let-down. We had so much fun the week before that we had high expectations, and I’d come up with a rip-roaring little scenario too. It was to be played out on a 6×4 foot table, and involved a sortie during the Siege of Lucknow. However, Jack and Derek had been busy playtesting the new version of Sharp Practice, and convinced us that what we really needed was a game demonstrating the new-look rules. The trouble with playtesting of course, is that the rules are – by definition – untested.

Unfortunately only Jack and Derek had seen the new version, and decreed that all old rules – the ones we’d just used the week before – were null and void. The result was a rather slow and unrewarding game, which looked great, but nobody enjoyed playing as much as they should have. Don’t get me wrong – Sharp Practice and its new variant are excellent  – only this chaotic playtest wasn’t the best game I’ve played with them.

The objective – such as it was – was for the British to rescue an “exploring officer” (Lt. Guy Burgess) who’d been spying out the “pandy” camp, but had been cut off inside the town of Delhibeli. Rather than attack along the Great trunk Road, the British launched what amounted to a raid on the town, approaching it through the jungle to the east. The small British force was divided into three commands, run by myself, Chris and Ken. We had a couple of eight-figure “groups” apiece, plus an officer.

The mutineers were ably commanded by Campbell and Bart, and had about three times as many troops, which meant that the British wouldn’t really be able to get sucked into a stand-up fight. this game had to be all about getting in, out and not getting caught. The game began with the British emerging from the jungle. That meant the British couldn’t have any cavalry or guns – it was an all-infantry force. Derek and Jim let us deploy in “jump off points” – a mechanism stolen from the too Fat’s Lardies’ excellent Chain of Command rules – so we didn’t spend a lot of time marching on to the table.

On our left, Chris was to form a firing line with half our force, and act as the backstop. His job was to cover our retreat. Ken’s Ghurkhas were charged with racing into the town, making contact with the spy, and getting him out of the place. My job, with my two “groups” of the 84th Foot – was to act as a close supporting force for the Ghurkhas. The game began well, with the Ghurkhas speeding forward, crossing the nullah that lay in front of them, and reaching the safety of a building on the edge of the town. They saw the spy waving at them from the roof of a nearby building, and beckoned him down and join them.

My own troops led by Captain Hugh J’arse reached the nullah, and formed a small firing line to the right of the Ghurkas. The spy came down through the tall building, but it was nip and tuck, as three groups of mutineers – actually the personal troops of a local Nabob – were closing in fast. They reached the building just as Burgess was about to come out of it. Deciding to avoid the main door he leaped out of a window, but thanks to a particularly unfortunate die roll he managed to drop his sketch map of the Mutineer dispositions. Still, with the “pandies” on his heels there was no time to go back, and he legged it towards the Ghurkas, who began pulling back themselves, after getting into a firefight with another mob of mutineers. They pulled back to the nullah, and together Ken and I withdrew, protecting our clumsy spy.

The trouble with the game of course, was that it was a playtest. What we should have done was to stick with the original Sharp Practice rules – which we liked – rather than play a half-completed set nobody knew but the two hard-pressed umpires. As a playtest version a lot of the old mechanisms had temporarily gone – like the bonuses for better troops firing, or their boost to morale. No doubt these will be stuck back into the finished rules – in fact the new Force Morale system is terrific for simulating Indian Mutiny games. However, these playtest rules were unpolished, and suffered from it. A few experimental mechanisms were added, which were new to most of the players. Derek and Jack did their best, but they lack the patience of saints (in fact they’re grumpy old curmugeons with no bloody patience), and they had to deal with players who tried to use the old system all the time.

Both umpires and players became a bit frustrated by the mixture of old system and new amendments tripping over each other. Next time I think we’ll stick to Sharp Practice as written – at least unless everyone has seen any new version in advance, and knows all about them. We all want to be singing off the same hymn sheet. When it comes out, the new version of Sharp Practice will be terrific, and there are some really stunning ideas in there. We just need to know what they are without having them shouted at us by the miserable old umpires! Then we’ll enjoy the game better!

Still, the game looked good, and at least one player – Ken -went home with a new-found enthusiasm for this colourful period. The next day he ordered his first Mutiny lead. I think Sharp Practice is the way to go for my Mutiny games, but until they final version comes out I’m willing to build up my armies, and wait for the happy day when we can all play the official new version.