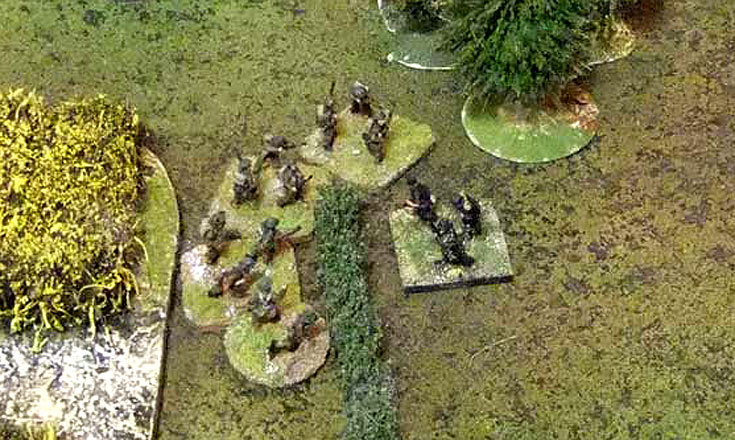 Operation Bluecoat in late July and early August 1944 was a British attempt to break the deadlock in Normandy. The Americas had launched operation Cobra, and the British were trying to put so much pressure on the German line that it broke. Our game was based on the assault on the village of Sept Vents at the start of the operation, on 30 July. In this game the young bloods Dax and Dougie played the German defenders, while the British were played by the older soaks of the club In Battlegroup Panzergrenadier the defenders get to use hidden deployment, and some units can be dug in, camouflaged and generally unseen until you stumble across them. So, the defenders made a sketch map of their dispositions, and the game began.

Jim, commanding the the British infantry tanks (Churchills of the Grenadier Guards) advanced behind the first wave of infantry, which he deployed in  echeloned formation – the best way, he claimed, of being able to react to unforseen events. In other words, he was playing cautiously, and expecting the worst at any moment. The British front wave – infantry of the Cameron Highlanders –  advanced cautiously, scouting and probing as they went. This paid off – they spotted German infantry dug in in the next field – a couple of sections (or stands). The leading British platoon poured in as much fire as they could, the Germans returned it, and a general firefight developed.

Both sides were pretty effectively pinned during this, so Jim sent in another platoon, following “proper” tactics and manoevering around the flank of the enemy position. It worked, and the German slit trenches were overrun after a brief flurry of close combat. It turned out they were men of the 752nd Infantry Regiment. With the position overrun, Jim occupied the trenches, and sorted out his line again, ready to resume his advance. The tanks also moved up, ready for the next phase. That, of course, was what the GErman players had counted on.

The Germans had a pre-planned artillery mission, targeted on their own advanced trenches. So, the British were milling around them, brewing tea and sorting themselves out when the barrage struck.  Dax was delighted when the whole British company were found to be inside the “beaten zone”. Jim was less impressed. The British suffered badly, before diving for cover in the trenches, or pulling back out of the beaten zone.

Meanwhile, Derek’s company of Cameron Highlanders was also advancing. He spotted and neutralised a German machine gun post, covering a big open field. This done, the British advanced – only to run into the fire of a second completely un-spotted machine gun. It caused heavy casualties, before a Churchill was called up to deal with it. So, the advance continued – Derek’s objective being the hedge at the far end of the field, behind which was a sunken lane. He reached the hedge without suffering any more casualties, then pushe don over it into the lane. However, the fiendish Germans had mined it. Fortunately for the Highlanders these didn’t cause any casualties, and they pressed on into the cover on the far side.

It though, was crawling with Germans – a whole platoon of them. A bitter close-range firefight followed, with the Highlanders and the German infantry battling it out amid the trees and hedges. In the end the Germans either fled or died to a man as a Highland platoon went in with the bayonet, and captured the position. This was real Victoria Cross stuff – and the highlight of the evening. There the game ended. The outnumbered Germans had been battered, but were still hanging on. The British had suffered quite a few casualties, but the momentum was with them, and it was clear that if the game continued then they’d sweep all before them. It was a great little game, and showed just how much fun – and how realistic Battlegroup Panzergrenadier can be.