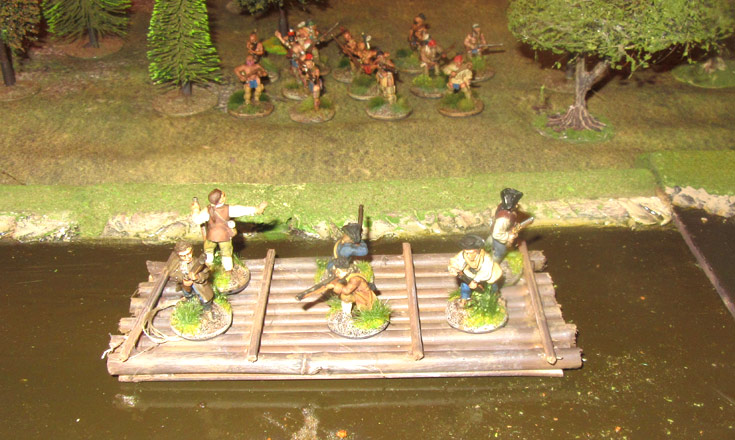 As games go, this was a very silly one. In Rebels and Patriots, the second of the book’s dozen scenarios is called “The Great River Chase”. In it, the defenders had three rafts laden with supplies, crewed by civilians. We gave the rafts to the British. They had to make it down the river – the length of a 6×4 foot table. Helping them along was a relief force of 18 points of British troops. Trying to stop the rafters were 24 points of attackers – French and Indians. Actually, in our game they were almost all Indians, apart from a few Coureurs de Bois. In this game, Gyles and Sean played the attackers, Mally took charge of the rafts, and Lindsay led the British relief force.

I was acting as umpire in this nonsense, and at first everything went quite smoothly. Each turn Mally had to roll for the rafts’ progress, and they could either go to the left bank, the right bank or down the middle. They could go quickly, slowly or even run into a hidden obstacle. Things began to go wrong t bout the same moment s the Indians appeared on the river bank. If a raft veered over to that bank, there was a chance the Indians could clamber aboard it. Otherwise they whittled away the rafters through some long-range shooting. Making things a little harder for Gyles on the west bank of the river was the appearance of Lindsay’s relief force – light infantry, rangers and militia. They soon landed up in a firefight with Gyles’ Coureurs de Bois, and the Frenchmen came off worst.

Over on the other bank though, Sean was having a field day. One of the rafts veered over to his bank, and a few of his Indians jumped aboard. Before the rest could join them though, the raft veered out into the middle of the river again. More by luck than skill, the civilians managed to finish off their assailants, helped by some long-range fire from the British Rangers on the bank. Then, disaster struck. Two of the rafts collided, and one of them broke apart. The crew managed to scramble onto the other raft in the nick of time, but it was damaged in the crash, and wasn’t looking too watertight any more. The rafts though, had got halfway down the table.

Next, Gyles tried charging the British with his Indians. He didn’t make it though, as the survivors of his unit skulked back into the woods. Over on the other bank though, Sean got another chance to go boating. One of the remaining two rafts ran into the left bank, and lodged there long enough for a most of a unit of a dozen Indians to jump aboard. They made short work of the civilian occupants, but then the raft drifted off into mid-river again, taking them with it. This of course was all as spectacular as it was entertaining.

The Indians unit though, was now split in two. So, the best the rest of the Indians could do was to run along the bank, trying to keep pace with it. Then, the two remaining rafts collided with each other.  This was too much for the Indians’ raft, which broeke apart and sank. The Indians though, manged to jump onto the adjacent raft. What followed was a brief but very bloody melee which ended with the Indians in command of the one remaining raft. This though, wasn’t the end of it. Their raft was sinking, having bumped into the right bank. So, throwing caution to the wind, Sean’s Indians jumped ashore and fell upon a unit of British troops. The melee was indecisive – the British pulled back, but it meant that the French had won, sinking all three rafts, and winning more Honour Points than their opponents. It was all extremely stupid – and great fun. The rafting rules though, might need tweaking before we play it again.