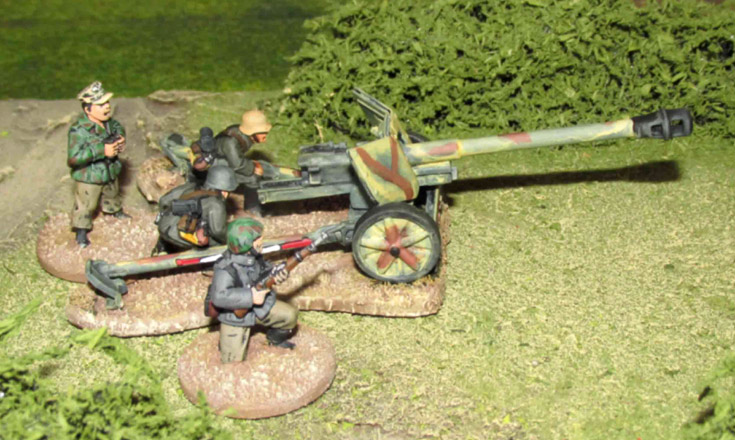 I had a very strange weekend. On Friday night I was in Orkney, giving a speech and the “immortal memory” toast at a very boozy Trafalgar Night Dinner. I had my car “valet parked” on the ferry, and the following morning I driving it ashore in Aberdeen. Two hours later I was in Lundin Links in Fife, where the AB1 group (a bunch of my wargaming pals from Edinburgh) were staging a weekend game. As I had to fly to Portsmouth on Sunday morning I was only able to play on the Saturday, but  had a great time there. By all accounts the big Sunday game was even better. The format was simple – on the Saturday there were four tables, and four scenarios. The outcome of the games played on them had an impact on what happened on the Sunday.

I played in two of these games – a straightforward infantry assault to capture a fuel and ammunition dump, and an attack on a pair of coastal fortifications. The first game pitted two British forces against two German ones, and the game was fairly linear – on my left flank my platoon destroyed Ian Carter’s German anti-tank position, allowing us to bring up our supporting armour, while on the right Derek Hodge’s troops struggled to counter the firepower of Dave Imrie’s men. Eventually a combination of bad die rolling on Dave’s part and good mortar fire on ours allowed us to claim victory.

In the second game Bill Gilchrist and I assaulted Iain’s Germans, and the game evolved into a bitter fight for control of a big coastal fortification, and a smaller pillbox. Again we had tanks to support us, and these proved invaluable during the closing stages of the game. On the last turn I stormed and captured the big gun emplacement, while Bill’s guys seized the pillbox.

A last-minute anti-tank grenade attack on our tanks came to nought, and the last of the German defenders went down in a hail of Allied fire. Once again the British mortar proved a godsend – dropping rounds on top of German HMG nests, silencing a pesky German sniper, and laying a thick belt of smoke to stop the Germans from firing on Bill’s tank.

It was all hugely enjoyable, and the very simple rules did their job, despite some very silly things like badly-skewed ranges and quirky morale rules. While Bolt Action aren’t a patch onChain of Command, they probably work better for this kind of easy-going free-for-all multi-player game. Besides, after Trafalgar Night I was too hung over to cope with anything more demanding…