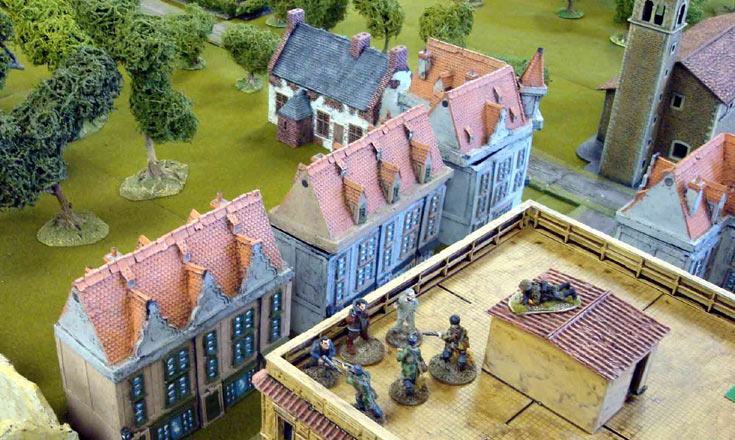 This was another game I missed, as I was stuck up in Orkney rather than Kirriemuir, but this weekend my fellow members of the League of Gentlemen Wargamers staged a two day Second World War game, loosely based on the drive towards Arnhem. As I wasn’t there I’ll have to let the pictures do the talking, but this small snippet of a report was supplied by Colin Jack;

This ridiculously large game was fought out by a dozen players over three big tables, and the action was divided into five smaller games, to make things manageable. These smaller games were meant to represent the Allies progress (or lack thereof) as they advanced through Holland towards the Rhine at Arnhem.  The first table was a German defensive action in the country, and the second was an Allied river crossing.  Apparently, its all a matter of bridges…

The third game centred around a German armoured counterattack as the Allies re-grouped.  Finally, the fourth and fifth games were urban engagements, played out as the Allies approached the Rhine.  The Germans achieved a marginal victory as both Arnhem and Osterbeek fell before the Allies could reach them. On the day it was all a bridge too far…

That said, it was an Allied player who scored the best individual performance of the weekend, even though he (Adrian) usually favours the square-heads.

The highlights of the weekend – and these weekends always produce highlights – included “Panzer Bob’s” Tiger surrounded by Shermans, looking a little like Custer surrounded by the Indians, but he still fought on despite receiving countless hits, and a column of British reinforcements appearing, only to have the leading Wasp blow up in a spectacular fireball, thereby halting the whole advance. A good time was had by all.