One of the things that happened during Lockdown was the Two Fat Lardies published a new set of rules. Infamy! Infamy! is a large scale skirmish set, and draws on the previous Lards sets like Sharp Practice, Dux Britanniorum and Chain of Command. I’d rashly decided to build up a force for this, and a Barbarian one at that. For my larger-scale Ancients games I already have a pair of matched armies – Late Republican (Caesarean) Romans and Gauls. So,  for this I opted for the Germans, as it was something a bit different. 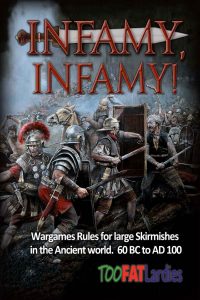 I also didn’t want to spend a fortune on the force. Fortunately I’ve heard good things about Victrix plastics lately, and so I decide to give them a go. I’m glad I did. I whistled a pack up from Caliver Books – £38 and free postage. That gets you a lot though – 60 figures. I was delighted with them – easy to put together, excellent proportions and faces, and  a good selection of weapons.

By then I’d worked out that in Infamy! the German warband has ten figures in it, and I’d need five of them. One of these though, is Oathsworn Warriors – the veteran warriors of the warband. Those fifty figures formed the core of the army. I also needed three leaders, and a unit of six slingers. Fortunately I had some metal slingers in my toy box. The remaining plastic figures were turned into a six man unit of fanatical warriors, and the last figure with his war horn became a “Musician” – an option extra in the rules. 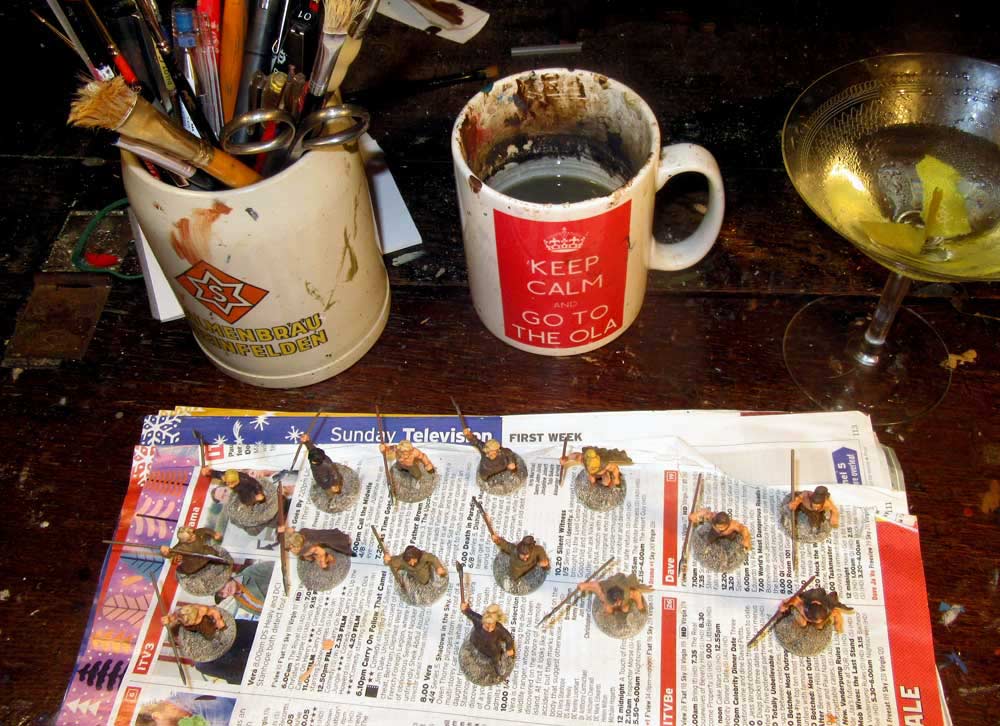 So, I set to, painting them up in batches of 15 figures at a time. I decided that apart from the Oathsworn, most of my warriors would carry spears, with a few axes thrown in. Apparently swords were a rarity in Ancient Germany, so only some of my leaders and a few of the Oathsworn get them. The same was true of armour – most of my Warriors don’t have any. So, after some careful cutting and glueing, I started painting. 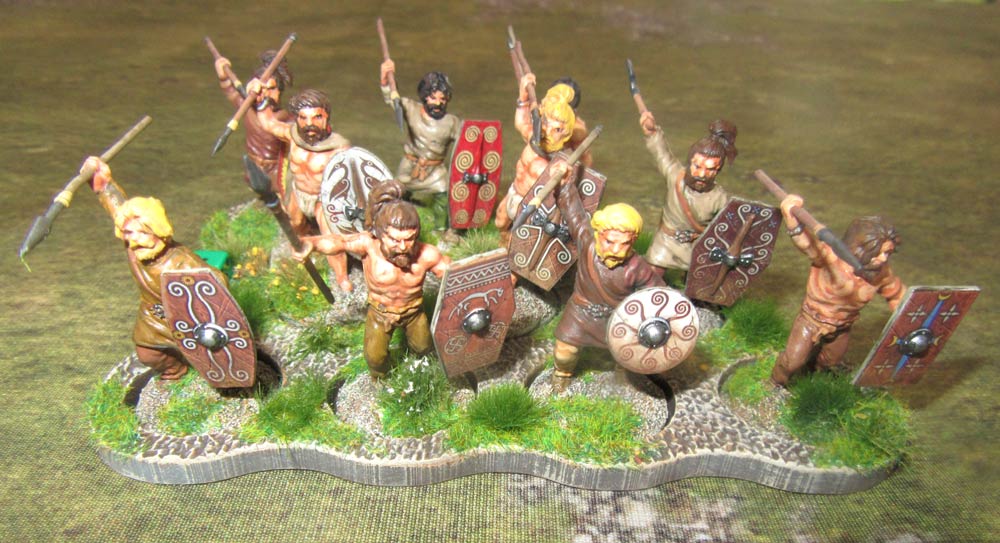 I was going for a pretty brown palette here – not a lot of colour. I’ve sure the Ancient Germans had coloured dyes, but I wanted my figures to contrast strongly  with the more brightly-clad Gauls and Britons, with their checked clothing. My guys were going to dress mainly in various shades of brown. Colour came from quite a few having blonde hair, and from the more colourful shield patterns. 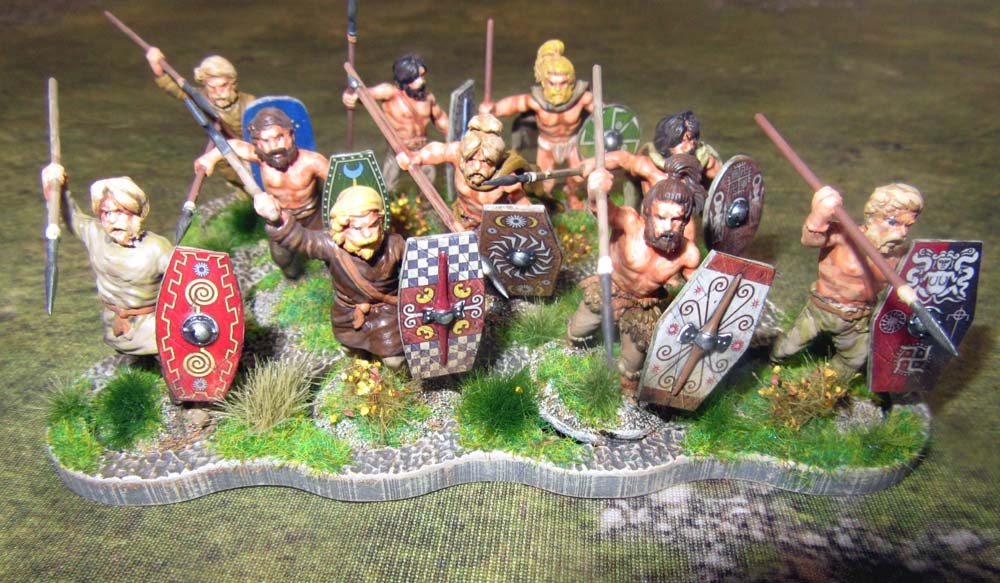 Speaking of shields, I really like Little Big Men shields, but I’m hopeless at sticking them on. Fortunately, my pal Jack Glanville is a pro at them, and so I sent them down to him to put on for me. He did a great job – the shield really makes the figure. Thanks, Jack! 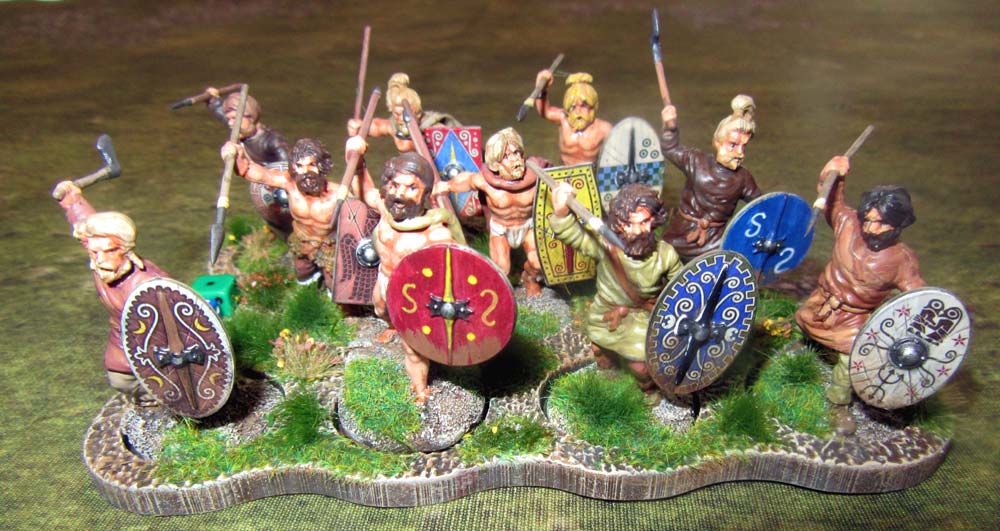 Getting through them was fairly straightforward. I paint mainly using Wargames Foundry acrylics, and as these figures had a lot of bare skin, then I used their “Expert Flesh” range. It actually came out OK, although I’d be the first to admit I’m not the best painter. I can do a reasonable wargames standard though, but for these, taking a little extra time over the skin kind of paid off. 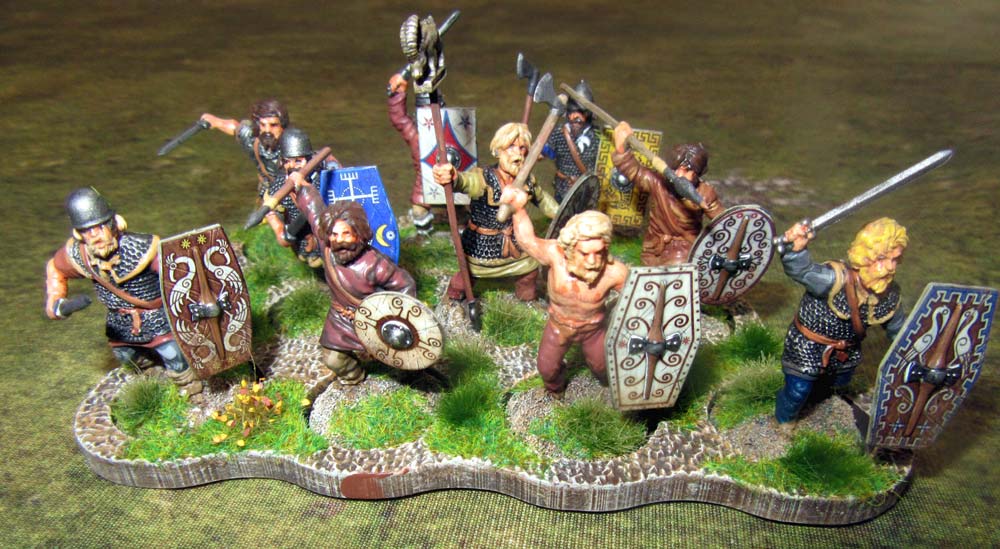 Now, the unit up above is the Oathsworn Warriors, with their smattering of armour and swords. Down below is the smlal six man unit of Fanatics. These warriors are the ones you need to leap out of ambushes in the forest, so I chose my wildest-looking figures! 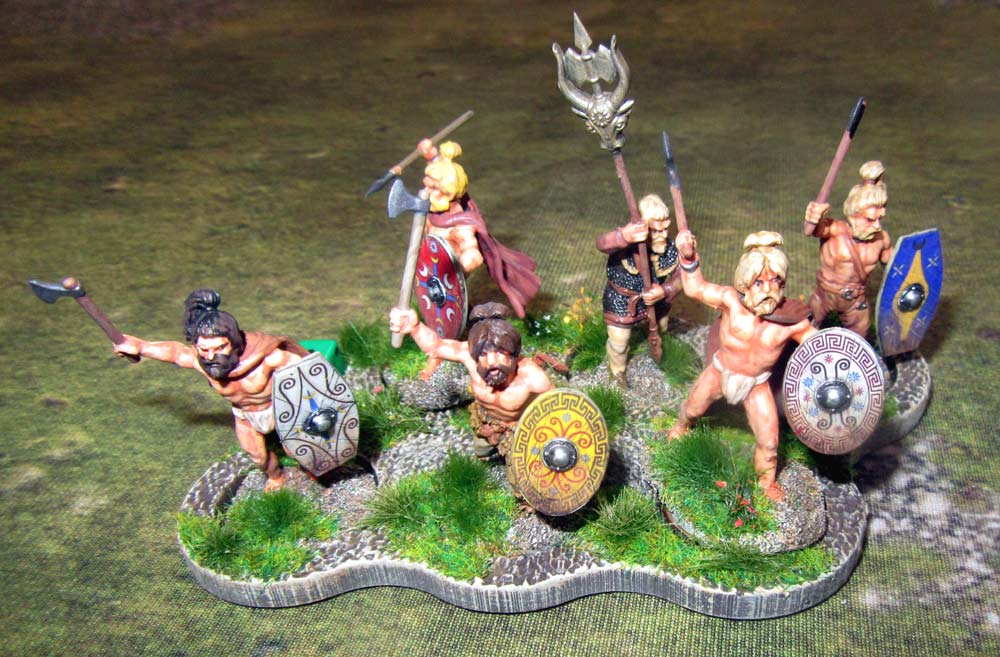 Leaders are important in Infamy!, as they’re the people who can actually make units move or fight. In my lists I have three of them, one of which is my Warband leader. These are all Victrix plastics too, from their two sprues of warriors with some ex-Roman armour. 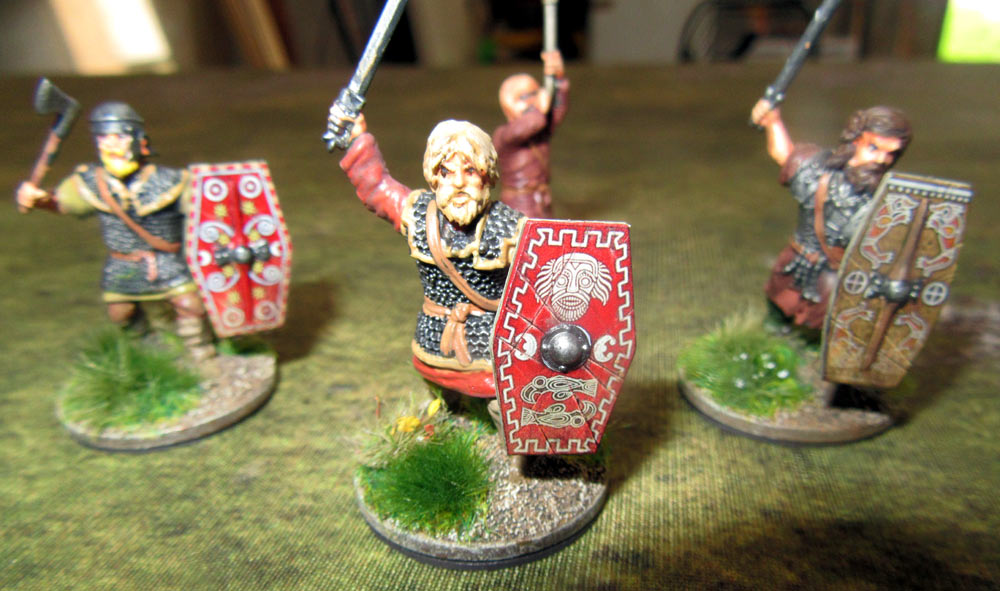 The final bit in the army is the slingers. I’m not convinced the Germans actually used slingers, but they’re in the rules, and so here they are. In my Ancients toy box I had about six of them, but they were Ancient British. So, I swapped three of their heads for wilder, more shaggy Germanic faces – spares from my plastics box. So far the heads haven’t fallen off – yet.

So, that completes the core army, with all but the slingers coming from that plastic Victrix box. I’m please with the result, but I realise I’ll have to raise a few more – some extra warriors, cavalry and skirmishers, as well, as a base containing wailing women – don’t ask! 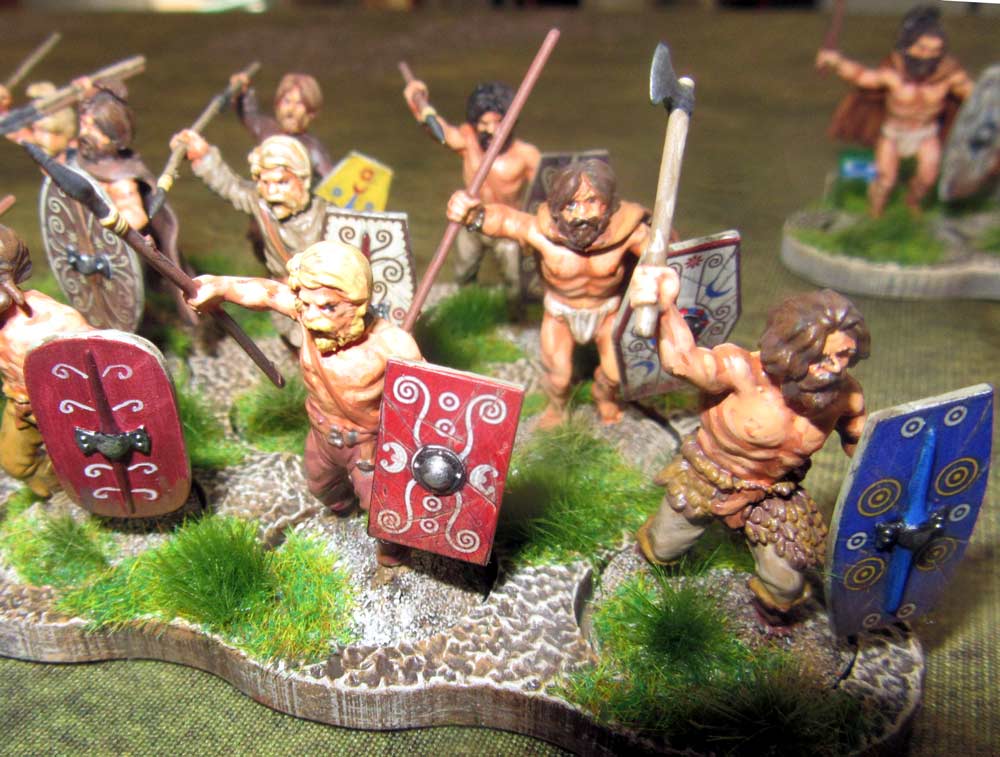 Oh, a word on bases. For this lot I used 3D-printed ones from Sabotag3d. They’re terrific, and best of all you don’t have to cover them with polyfilla and sand – a messy job. They come ready to paint and flock. They’re designed to fit UK pennies, and even have slots in them for micro dice – used to record Fervour and Hits. Anyway, I’m delighted with them. 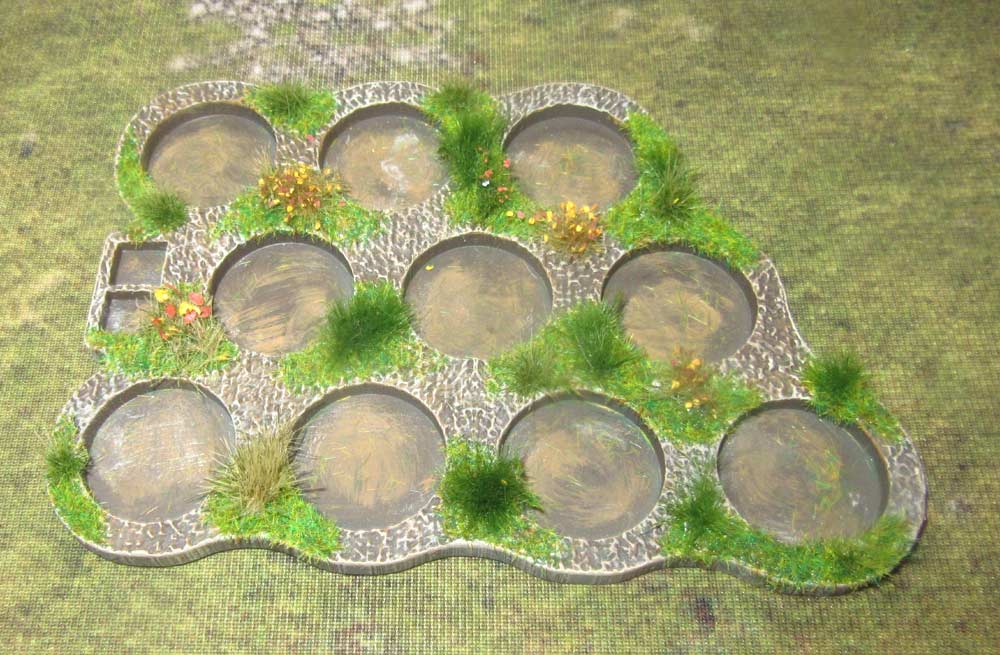 Of course, it might be a week or two before I get to try the rules out. Having skimmed them though, they look good. I’ll try a game or two, and then start planning the expansion of my German warband. For now though, this’ll do me.