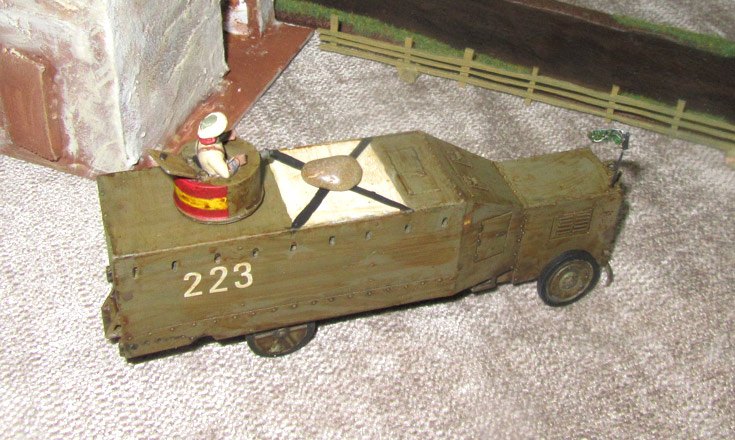 I found my self in Orkney this week, and so I went along to the local club, where the guys were playing a Chain of Command game set during the Spanish Civil War. Forewarned about this, I threw a box of lead and scenery into the car before I drove north. There were four of us playing, plus a fifth – Joe – playing online chess. Don’t ask. The rest of the hall was filled with youngsters playing assorted kinds of fantasy nonsense. So, in our game we played it with a mixed platoon a side – Gyles and I taking the Republican side, with a mixed platoon of Anarchist militia plus Republican regulars, while the Rebels – Sean and Alan – fielded half a platoon each of Nationalist regulars and Moorish troops.

Oh, and tanks. Did I say we had tanks? They had a Pz. I with a Breda 20mm, plus a UMC-35 armoured car and an armoured truck, while we had a T-26 and an old machine-gun armed FT-17. So, the stage was set for the skirmish around the hamlet of La Muralla de la Iglesia – the wall of the church – appropriate enough as we were actually playing in Kirkwall, Orkney.

It was a meeting engagement, played on a 6×4 foot table. First, both Sean and Gyles played out the patrol phase, with us grabbing most of the hamlet. Then we got cracking with the game itself.

In true democratic fashion I let Gyles’ anarchist half platoon hold the front line, while apart from my light mortar section my Republican regulars formed the reserve. The Nationalists didn’t bother with that – instead they deployed everything, with Sean’s Banda Nacional troops setting up in a wood beyond a stream on our right flank, while the Moors appeared in a fortified farmouse, just down one of the forks in the main road. His armour came on very hesitantly along the other fork.

My two light mortars set up on the far side of the table in a small copse, and began lobbing  rounds into the Nationalist ranks. Still, we were outnumbered, and in the firefight that followed  the worst of it. Gyles pulled his half-platoon back into the cover of the buildings, but for some reason the rebel assault didn’t come. I didn’t remember about Alan. Its been a while since I played a game with him, and I forgot that decision-making cones hard to him. So, things happen slowly.

Sean though, came out of his treeline and advanced towards the stream. We moved our machine gun round and between it and the mortars that particular threat was blunted, with two of his three squads shot to pieces, or piled high with “pin” markers.

By then we’d brought on our own Republican tanks, with the FT-17 loitering at the back, as some sort of reserve, while the T-26 surged forward, and began shooting up the Moors’ armoured truck. In a rare fit of dynamism Alan played an “ambush” move, and deployed his anti-tank gun right in front of the truck. it missed, but in the exchange of shots that followed we silenced it, but the T-26 had to pull back around the corner of a small church. Still, this little exchange seemed to spur Alan’s Moors into action. Encouraged by a promising roll of activation dice, his Moors finally began to advance.

We cut them down a bit as they came on, with mortar and rifle fire, but with a roll of a “double six” he surged on, almost to the edge of the hamlet. That, of course, was when we dropped the other shoe. I deployed my half platoon of Republican regulars, with an attached light machine gun, and lined them up behind a wall. They opened up at point-blank range, and bullets ripped into the Moorish ranks. The next phase saw some lousy dice from Alan, so effectively I got to fire again, and this time the handful of Moorish survivors broke and ran.

That left the rebel armour to deal with. Ignoring the armoured car I rolled the T-26 forward into an olive grove, and within line of sight of their Panzer 1. Some excellent die-rolling saw it badly damaged, and “pinned”. Then it went on fire. So, effectively, with the rebel morale plunging, that marked the end of the game. It was a pretty comprehensive win for the Republic, despite the loss of a few anarchists. I hadn’t played CoC for a while, let alone “Spanish CoC“, and it was good to get the toys onto the table. It was also good to spend a few hours gaming with my chums in Orkney. All in all a splendid little evening, with the events recorded for posterity by Senor Hemingway, who saw it all happen – albeit from a healthily safe distance.