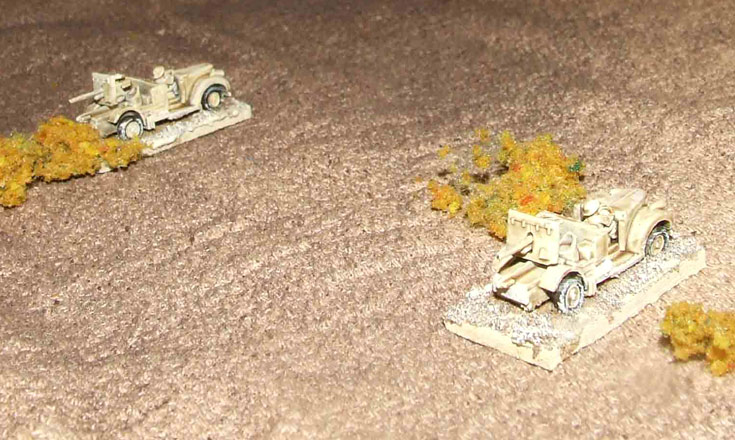 While we’ve played a lot of Second World War battles before, this was the inaugural game of a new theatre and a new scale. The scenario (available as a free download at the end of the article) is based on an uncharacteristically hasty German dawn attack on the Tobruk perimeter on 14th April 1941. We started the game with the pioneers of the 5th Light Division (soon to be 21st Panzer) having established a “bridgehead” over the anti-tank ditch that formed the outer defence line.

The panzers of the 8th Panzer regiment were ready to exploit this, by launching a drive north to seize Kings Cross – a junction of the Via Balbia road a mile or so to the east of Tobruk. Similar tank-heavy tactics had served the Germans well in France, when the defenders did the sensible thing and surrendered. Unfortunately for Rommel, nobody had explained this to the waiting Australians, or the gunners of the Royal Horse Artillery.

The German tanks drove forward, and almost immediately they ran into a belt of mines. One tank was damaged, and another destroyed. First blow to the defenders. On the right of the German advance lay a defensive emplacement, surrounded by mines and wire. The Germans pummelled it with artillery, trying to silence the anti-tank guns and machine guns  harassing the German columns. One by one the defenders there were forced from their guns, and the German advance continued. The advance of course, was a slow one, as first the men with the mine detectors had to clear paths through the minefield. Once that was done, the panzers began filtering through the lanes, and spreading out in the open desert beyond.

That was when they encountered “The Blue Line” – the inner ring of defences. Over on their left was another defensive box of infantry, but it lacked the weaponry to harm the German tanks. More of a threat was the battery of 25-pdrs., dug in beyond the Via Balbia. These guns began firing over open sights, and the leading wave of panzers were hit hard, with tanks destroyed or damaged and forced to retire. Over on the German right a brace of portee-mounted 2-pdrs. appeared, and began a duel with the German armour. They weren’t as lucky as the 25-prs. – only one German tank was damaged before they were both knocked out.

Still, the German momentum had been lost, largely because the regimental command tank had just been destroyed by the gun battery. It was at that point that the Commonwealth reinforcements arrived – a squadron of A-10 cruiser tanks – not a particularly serious threat – and a solitary Matilda II, which entered behind the small POW compound on the Tobruk road. To add to the German woes the long-awaited Stuka support finally arrived – and the plane failed to acquire a target.

It was now clear that the Germans wouldn’t be able to reach their objective, so the order was given for the panzers to withdraw, leaving the infantry and anti-tank gunners of the division to hold the breach. In fact, our refight of the battle panned out almost exactly as it did in the real battle – the Germans failed to break through, and they retreated, leaving the infantry to be mopped up by Australian counter-attacks later in the day.

I had some reservations using Battlegroup Panzergrenadier for such a tank-heavy game, but the rules worked perfectly, and gave us a fast-paced and tense encounter. I’ll be up in Orkney for a few weeks, and while I’m there I’ll paint up more of this 12mm kit – some British this time. All of the nicely-modelled 12mm figures and vehicles on the table were from Minifigs. This scale certainly “has legs”…