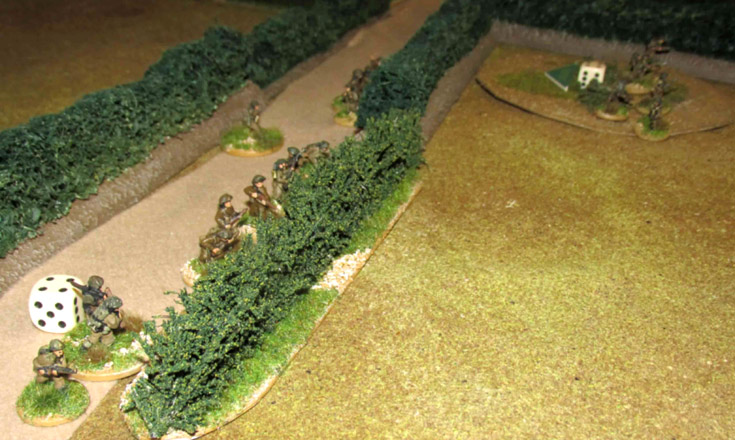 I don’t normally do 15mm games. I don’t have any figures in the scale anymore, and don’t really see the point of it. Still, needs must. In Edinburgh, Jack, Derek and Jim have tons of 15mm Second World War kit, and so it remains their scale of choice. They invited me to play a Chain of Command game, and having only tried out the rules once I jumped at the chance. Having helped playtest them they’re all very familiar with the rules, so it was a chance to learn a little more about them before I sit down and plow my way through them myself. I know the basics, but there’s a lot of juicy detail that I still have to get to grips with.

This game involved a British probe down a road somewhere in France, just after the Normandy campaign. A German rearguard were charged with defending a bridge while engineers prepared it for demolition. The British were charged with sending their reconnaissance squadron down the road to and off the table, to seize the bridge intact. Jim and I played the Germans, our two Greek players and Jack ran the British, and Derek acted as hard-drinking umpire.

Chain of Command games begin with both sides sending out patrols – or rather patrol markers – to establish the front line, and the location of the “jump off points” where a player’s troops can deploy. The British ended up with their ones behind the lateral road, and just behind a small copse at the side of the road. The scout cars and armoured cars of their reconnaissance platoon would appear on the road. For their part the Germans placed their “jump off points” in the woods on either side of the road, and behind the one small building on the table-  a roadside inn. The game began with the British deploying a platoon on each of their points, while the Germans remained hidden.

So began a rather cautious British advance. Before the game began a scout car had already been brewed up, so the British knew there were Germans in the woods. So, they began advancing, with one section going onto “overwatch” to cover the advance of a second section. A third section began crossing the open fields beyond the “T” junction. The Germans soon deployed a squad along the hedge bordering the wood, close to where the puff of smoke is in the top picture. They ripped into the British rifle section in the open, who took cover in a patch of rough ground. The guys on overwatch returned fire, and a firefight ensued in with the Germans had the worst of the exchange. The 2-inch mortar helped by laying smoke in front of the German positions, to block the line of fire of their LMG.

Beyond the road the British approached the apex of the other wood, where they came under fire from a second German squad. Support from a the British mortar helped their rifle section gain cover, and another heavy firefight began. Meanwhile a third German squad deployed next to the first one, to even the odds in the exchange of fire across the big field. By this stage the British players decided to bring on the first of their scout cars, and it raced down the road, eager to support the British attack. Instead the Germans played a “Chain of Command” chit, deployed a panzershreck in ambush beside the road, and brewed up the Humber scout car.

That pretty much stymied the British advance in the centre, and the game bogged down into something of a stalemate. While casualties mounted, it became clear that the British weren’t going to be able to push their way past the Germans, and so by mutual consent the game came to an end. I have to say, these rules really seem to capture more of the flavour of small infantry actions of this period than any others I’ve come across. I bought a hard copy of Chain of Command at Crisis this week, so as soon as I can I’ll give the set a good read-through, and then try them out again.