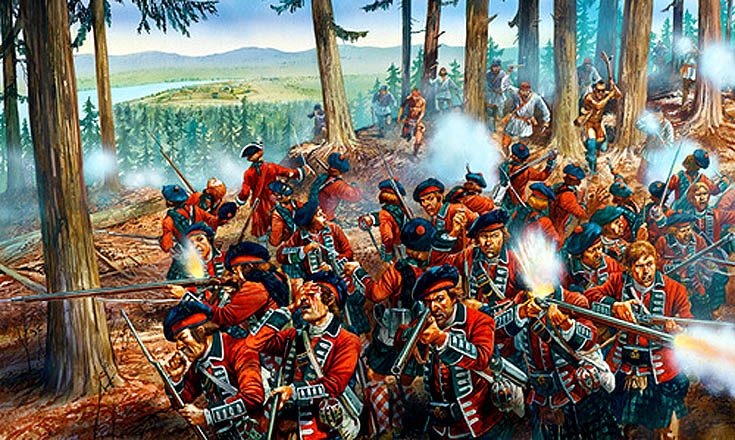 Skulking around in the woods

I’m not usually a great fan of skirmish games, but that’s the best level to treat this offshoot of the Seven Years War. Forget the few big battles and sieges such as Quebec and Louisbourg – the real wargaming potential of this conflict is found in the struggle in the backwoods – la Petite Guerre. I used to dabble in this as a period about five years ago, but I grew tired of it after a few games, as I generally prefer larger-scale battles. Recently my interest was rekindled by a set of rules – Muskets & Tomahawks – and soon I was painting Huron warriors and Compagnies de la Marine again. This time, thanks to the rules, I think I’m on to a winning period!

I was first inspired to game the period after reading White Devil by Stephen Brumwell, a really good account of the part played by Major Rogers and his Rangers – especially the attack on St. Francis which featured in that old Spencer Tracy film North-West Passage. We’re often inspired by Hollywood, and cheap DVDs of North-West Passage, along with Drums along the Mohawk and Last of the Mohicans finally tipped me over the edge…

When I first played this, our preferred rules were War in the Forest by Chris Peers, an adaptation of his A Good Day to Die skirmish set. They were well suited to La Petite Guerre. War in the Forest even comes with a little campaign system, and little pieces of rules flavour, such as Abenakis are harder to spot in woods, or that the Delaware Indians can augment their forces with the heroes from Last of the Mohicans. However, the games we played were something of a disappointment, as the rules lacked the panache of other sets by the same writer. Next we tried using a simpler version, based on Chris’ In the Heart of Africa rules. Rather unimaginatively we called them In the Heart of the Forest. They worked well, and were faster and very bloody. However, yet again they weren’t quite what we were looking for. We also tried Ranger by Pete Berry, the man behind Bacchus Miniatures. These rules were great fun, and had a wonderful “incident” table, but even Ranger wasn’t enough to rekindle our waning enthusiasm for this period. So, after a while we dropped the period, and moved on to other things. I never had many figures for this, but eventually I sold them, and haven’t regretted my decision – until now.

Now, thanks to Muskets & Tomahawks we’re back with a vengeance. I built up a small 28mm force for each side – Companies de la Marine, Canadian Militia, Coureurs de Bois and Hurons for the French, and Highland Regulars, Light Infantry, Rangers and Mohawks for the British. In fact you don’t need many figures for a game – just a couple of dozen a side – but the rules lend themselves to larger multi-player games, hence the need to have a wider range of forces. The more I get into this then the more I’m tempted to buy more figures. The risk, of course, is in M&T a unit is just 4-12 figures, so just buying a pack or two of figures will get you a nice shiny new unit. There’s an insidious temptation about it all, and I’m sure I’ll eventually land up with boxes of figures, plus forts, canoes, ships and whatever else takes my fancy!

The rules themselves are card driven. Each force gets a number of cards, marked with a troop type and a number, representing the number of actions each troop type can perform. For instance, irregulars have four cards in the pack, each with one action, while regulars get two cards, each with two actions. The same applies for other troop types – militia, Indians, provincials, artillery. An action involves either moving, firing or reloading, and when the card turns up, each unit of that troop type on a particular side can carry out these actions. The result is a game that see-saws around, with everyone closely involved in what happens next, right up until the last card is turned. Then the pack is re-shuffled, and you carry on until you reach a conclusion. Officers have their own cards, and can either do things themselves, or lead nearby units. Firing is regulated using straightforward six-sided dice, with the now usual Warhammer-esque rolls to hit, to save and to kill. An added piece of chrome – reminiscent of Ranger – is the random events chart. When an event card turns up you roll the dice and consult the table. The resulting event can sometimes be something mild, like a change in the weather, or something far more dramatic, like the arrival of unexpected reinforcements, or a friendly fire incident.

Then there are the scenarios themselves. While you’re encouraged to devise your own, each side can also roll a dice to learn what their mission is. Both sides can have completely different objectives, which adds an interesting slant to the game. Then there are the “Side Plots”, where both sides secretly roll dice to choose their secondary mission. This can be the capture of an enemy officer, the guarding or rescue of a hostage, or even the desire to make the enemy shoot first. These make the game that little bit more quirky and enjoyable. All in all M&T is a very lively set of rules, and ones that come highly recommended. Give them a go, and see what you think. Before you know it you too might find yourself buying fur trappers, canoes and Mohicans!

As for figures most of the ones shown here are a combination of Redoubt, the Galloping Major and Perry Miniatures, plus a few odd figures from Conquest Miniatures, Front Rank and Dixon Miniatures. Most are Redoubt, who produce a great range for this period, with lovely figures, as well as war canoes, settlers, fortifications – anything you’d need to game this period. Of these, Perry, Conquest and Dixon are smaller than the other manufactures, but still compatible. Another drawback is that the extensive Conquest Miniatures page is currently unavailable in the UK, largely due to supply problems from Conquest’s American owner. With luck this’ll be resolved soon, as they do some great Jesuit priests I’d like to have, ready for my Ranger raid on St. Francis.l