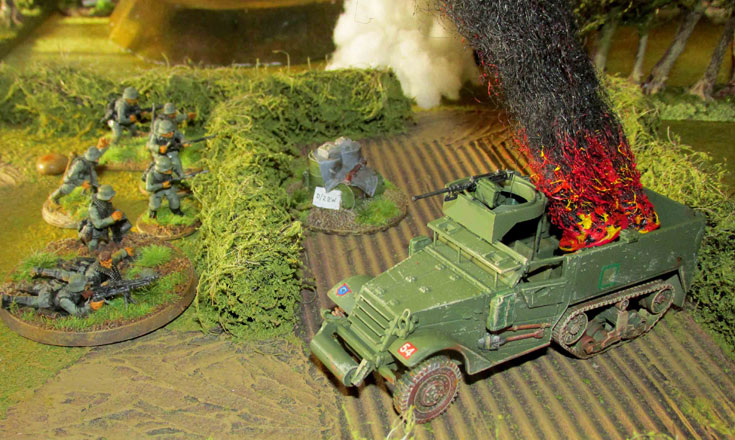 This Thursday I was up in Orkney, arriving after a six hour drive and a one hour ferry crossing. I joined in a game staged by Alan Bruce, with two of the other usual Orkney crowd – Sean and Gyles. I have to say, although I was meant to support Sean as a co-German commander, I was pretty wiped out by the drive, so I pretty much let him do all the running.  The game itself was a straightforward clash between two platoons, each supported by a tank and a half track.

Since I left the guys went back to basics with their games, reversing the drive to field as much kit as possible. So, this was a fairly minimalist game. Also, I’ve only provided five photos, as my camera was suffering from “operator error” again.

In fact the game was a bit underwhelming – both sides deployed as far forward as they could, and began blazing away at each other. The Sherman advanced up the road towards the German-held “T-junction”, only to be brewed up by a lurking Panzerschreck. The Germans then felt cautious enough to bring on their own tank – a measly little Pz. III, which promptly had its main gun knocked out by a PIAT.

Still, it made a nifty armoured machine gun post, and with the PAIT wiped out by a flanking GErman infantry swquad it just sat where it was near the junction, stopping any British attempt to advance. On the far side of the little 6×4 foot table a British section advanced under cover of smoke, supported by an M5 half-track equipped with a .50-cal machine gun. It drove the Germans back slightly, capturing their forward “jump-off point” (a pile of oil drums marked the spot), and things looked set for a German rout.

Then the reserve German section turned up, knocked out the half-track with a Panzerfaust, and disposed of the British section with some nifty machine gun fire. Both sides then effectively lacked the strength to advance, and so the game ended in a rather disappointing draw. Still, it was enjoyable enough, and I certainly reveled in the opportunity to catch up with the guys again, after a few months away from the island.