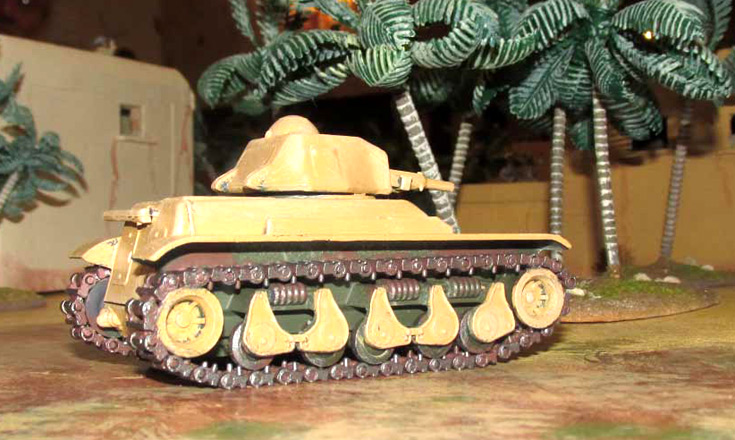 This week, I signed up for a game with Colin Jack, down in the Edinburgh club. His games are often a little “niche”, and this was no exception. It was a Bolt Action skirmish game, set in Syria in June 1941. The small fictional Syrian town of El Fuq was the centrepiece of the game, which saw two well-matched forces – one British Commonwealth, the other French – decide they needed to control the place. The game was very simple – there were six buildings – the side who controlled most of them when the game ended was the winner. In effect it was a sort of game of musical chairs, with toy soldiers.

Bill, Tim and I formed the French team, and we began a slow advance with our motley collection of Ghoums, Senegalese troops and local Arab irregulars. I don’t think there was an actual Frenchman on the table, unless you counted the invisible crews of our three AFVs – two small Hotchkiss H39 tanks and a strange-looking armoured car. The British players (Colin and Ray) had a force of Australians, British commandos, French Legionnaires and Indian troops, backed up by an even stranger assortment of AFVs – a Crossley armoured car and a few portee weapons on trucks. Strangely – or not if you know Colin – every building was occupied by a figure from the film Casablanca. We had no idea if this had any relevance or not!

My Arab irregulars ran for the building on my right – one occupied by Rick himself. We got there just in the nick of time, as a unit of Bedouin irregular cavalry rode up to the back door, followed by a protee vehicle thingy. Fortunately our reinforcements included a French armoured car and an Arab machine gun, so the two sides shot away at each other, with the Bedouins caught in the crossfire. Over to my left the French took the other two buildings at our side of the town, supported by one of our two tanks. So far so good. Unfortunately the British were doing the same, and soon had control of three buildings of their own. That meant that if anyone wanted to win the game, then they needed to capture at least one enemy-held building.

The French made the first move, as the Senegalese dashed out of cover to close assault the Crossley. It was destroyed, but so too were the African troops, who were mown down when they tried to exploit their success and attack a building held by the Australians. Instead it was the Aussies who advanced and captured the building where the Senegalese had launched their attack from. On the far side of the table my armoured car destroyed their portee, assisted by fire from the Arab irregulars. Seizing the initiative my Arabs also stormed forward, and captured the unoccupied building where Sam the piano player was giving an impromptu concert on the roof. This success was all to brief, however. The British commandos launched an assault, and my defenders were wiped out. Outside the second portee and my armoured car fought their own private duel, and both were eventually forced to retire from the table – effectively cancelling each other out. However, the two French tanks were now in play – one on each side of the village.

Back on the French left the Ghoums counter-attacked, and this time it was the Australians who were wiped out after some bitter hand-to-hand fighting. That was really it for the game. After three hours of fighting both sides still only had three buildings – the situation we were in two hours before, only with less men on the table! This little game was therefore declared a draw, and we packed our toys away knowing it could have been a lot worse! The Casablanca figures, by the way, were only there as set dressing. As for the rules, I find lots of things with Bolt Action profoundly silly. The way figures move (all or nothing when you enter buildings), the way melees work and the strange weapon ranges are all frustrating. That said, they do produce a simple little game, and when you’re fighting in Syria with Casablanca figures on the table, then simple is probably a good thing. Otherwise, I’d avoid these rules, and stick to Chain of Command.