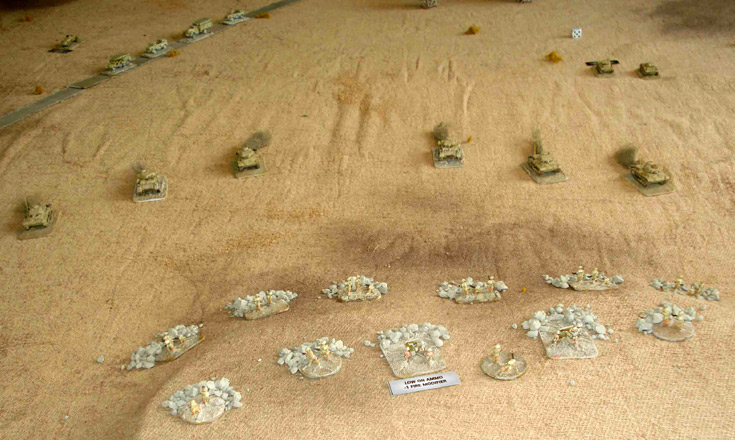 This small game was played out in Orkney, between Angus and his oppo Mark. This was Mark’s first post-Napoleonic game, so I let him have the good guys, while I commanded the Nazis. The scenario was set at the time of Operation Brevity, in mid-May 1941. “D Company” of the Durham Light Infantry held a low ridge overlooking the main road from Tobruk and Sidi Azeiz to Fort Capuzzo, a few miles to the west of the fort. The Germans conducted a “reconnaissance in force”, spearheaded by two companies from the 5th Panzer Regiment, supported by two platoons of panzer grenadiers and a reconnaissance company. They had ample artillery and air support available, but until this could only be used once they’d identified exactly where the British positions were.

This small game was played on a 7′ x 5′ table, with the ridge, a road, and a small house. The Durhams were dug in, with sangers covering the ridge. The platoon blocking the road weren’t so fortunate, as they hadn’t time to improve their position before the Huns arrived. The Germans launched their tanks straight at the ridge, advancing cautiously, and trying to spot the enemy as they went. On the road they were a lot less cautious, and the reconnaissance company barrelled towards the building before fanning out into line – a column of trucks behind them. They soon ran into trouble. A 2-pounder AT gun knocked out the lead armoured car, while the others were pinned by British fire. The infantry de-bussed behind them, and began shooting back.

Over on the ridge the British got lucky again, knocking out a couple of tanks with 2-pounders, and even scoring a couple of hits with their Boyes AT Rifles. Soon the German advance was stalled, as tanks began to be pinned, forced to retire, damaged or knocked out. The tankers called on support from their divisional artillery, and the guns did a good job of plastering the ridge. The first barrage all but wiped out a platoon of the Durhams, dug in on the right (northern) side of the ridge, and for the moment the 2-pounders were suppressed. Thanks to the barrage, the Germans managed to regroup, and resume the advance. By now the reconnaissance had developed into a full blown hasty assault. Unfortunately the German player (that would be me) rolled pretty poor initiative dice, which meant that the infantry supports were trailing far behind the panzers. This would be an old-fashioned cavalry charge – against dug-in infantry.

The panzers reached the base of the hill, only to have the AT gunners recover from the suppression caused by the artillery barrage. As a result the tanks were met by close-range anti-tank fire, which managed to knock out one of the two German panzer companies. The GErman tried outflanking the hill with a pair of Pz. II’s, but when these tried to close-assault the company headquarters they managed to knock out the attached mortar section, but came a cropper from opportunity fire from newly arrived British tanks. In the subsequent close quarters fight the Durham’s headquarters section knocked out the remaining Pz. II with – I presume – sticky bombs, grenades and lots of pluck.

Those British reinforcements consisted of a squadron of A13 cruiser tanks from the 7th Armoured Brigade. They were immediately targeted by the Luftwaffe, and a Stuka attack succeeded in knocking out one tank and damaging the other. Fire from the remaining German panzers succeeded in knocking out another British tank.  Another squadron of Vickers Mk VI light tanks destroyed what remained of the German reconnaissance company, and began engaging the German infantry which had deployed behind the reconnaissance vehicles. At that point the German player called it a day. The reconnaissance in force had  rather rashly been turned into an assault, and the enemy proved too strong to dislodge. The remaining tanks withdrew under cover of smoke, and drove of the British light tanks before collecting their supporting infantry and heading back off the table towards Sidi Azeiz. I suppose I should have been more cautious, and plastered the hill with whatever I had before launching an unsupported tank assault. Still, it was fun, and the main thing is Mark won his first Second World War game, and consequently vowed to play more of them