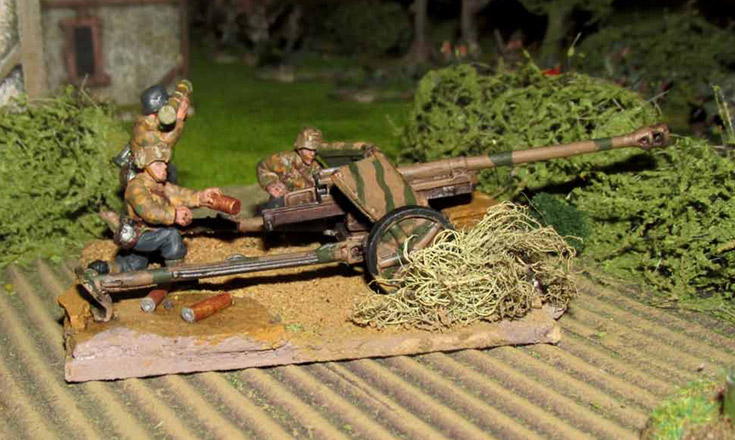 Having driven up through the snow in the Highlands, I arrived back in Orkney to join in this game, set somewhere in Normandy. There wasn’t much subtlety to it. In fact, the table was the same one as we’d used for our Seven Years War game a few weeks ago – the guys merely put some extra roads and fields on the table, and a gun emplacement! They played an all-infantry game on the table last week, but this one involved tanks – quite a few of them. Alan now has a “zug” (platoon) of Pz IV ‘s. and wanted to use them. So, in this Chain of Command game the infantry was very much in a supporting role, apart from the large numbers of panzershreck teams wandering around the tabletop, and one PIAT team on the British side. There wasn’t really any point to the game either – it was just a clash between two roughly equal sides.

The game was played on an 8×6 foot table, with the patrol markers coming on from the middle of the two long sides. That patrol phase ended with the Germans deploying between the village and the island in the river, and the British along the main road. Both sides had two entry points for their tanks, behind their table edge. Essentially the infantry held their relative positions until the tanks came on, the Germans dividing their zug into three groups. Two moved through the village to climb a small hill and then interdict the road on the British right, another two trundled over the ford leading to the small wooded island in the centre of the river. The zug commander stayed in the middle, advancing forward to pin down the British infantry deployed along the road.

For their part the British troops of four Shermans moved on from  behind the small wooded hill midway along their table edge. Two tanks – including the troop leader and the Firefly – stayed back in reserve, while the other two moved forward to counter the German advance. The Germans made the first move on their left, with their lead tank on the small hill. After being hit by a PIAT round (to no effect) the panzer raced forward, crashed through the hedges in front of it, and reached the road.

It tried to run over the PIAT team, but stopped 1″ short. The PIAT fired again – and missed! They were saved by the first of the Shermans, which fired along the length of the road, and knocked out the advancing Panzer IV. The next tank to go was also a German casualty. The leading Pz IV on the wooded island broke through the trees and began fording the river. A Sherman fired at it but missed, but then the British deployed their winning hand – a 17-pounder AT gun, right in front of the enemy tank. Unfortunately for its crew it missed too!

That started a two turn firefight, which ended when the anti-tank gun knocked out the Panzer – just one phase before its crew were shot up by tank and infantry fire, and broke. So far the Germans were down two tanks, while the British still had all of theirs That though, was about to change. The Sherman which had been duelling with the Panzer on the island was fired at by the second PzIV, which had just emerged from the trees on the island. It knocked out the Sherman with its first shot. The next threat came from an advance by the German infantry. The British weren’t too worried – they had infantry of their own, dug in along the edge of the bocage-lined road. They though, weren’t the real target. In amongst the German squad was a panzershrek team, which drew a bead on the second British Sherman and brewed it up. So, in the space of two phases the Germans had got their tank-killing equaliser.

Meanwhile, the infantry of both sides had been trading fire, and the British had been getting the worse of it. The Germans were panzer grenadiers, with not one but two LMGs in each squad, and each had a higher rate of fire than a Bren gun. As a result one British section in fairly light cover was shot to pieces, and the survivors broke and ran. Their companions remained firmly wedded to their thick bocage banks and hedges, and so ended any British probe forward. From now on they’d fight a defensive battle. Of course it didn’t help that the dice didn’t favour the British, as they had trouble getting their Forward Observation Officer activated, to call down supporting mortar fire. In fact it was the Germans who first produced a mortar “stonk” – one that helped the rapid demise of that British section – but the British retaliated by playing a CoC die and so ending the turn – and the stonk with it.

The Germans were still edging forward – they had a squad moving up behind the command tank in the centre of the table – but their advance was slow too, and the British still had a reserve of both tanks and infantry. At that point though, we brought the game to an end. I was pretty tired, having just spend six hours driving through the snow, and it was 11pm anyway, so we called it a day. The game was a draw, but looking at the table the British did well to achieve what they did. The Germans had more tanks and support weapons in play, and this was meant to be an even handed game. Next time we’ll do two things. First, we’ll activate the “Big CoC” rules when using more than one platoon – in our case one reinforced one of infantry and another one of armour on each side. That means there will be more command rolls, and we’ll have a much faster-moving game. Second, we’ll try pointing things up, rather than just putting all our toys on the table. Of course, that’s always a temptation, and I’ve just ordered a Churchill Mk VII,  so perhaps we’ll continue getting the toys out for one more game, just to exact revenge on the Jerries!