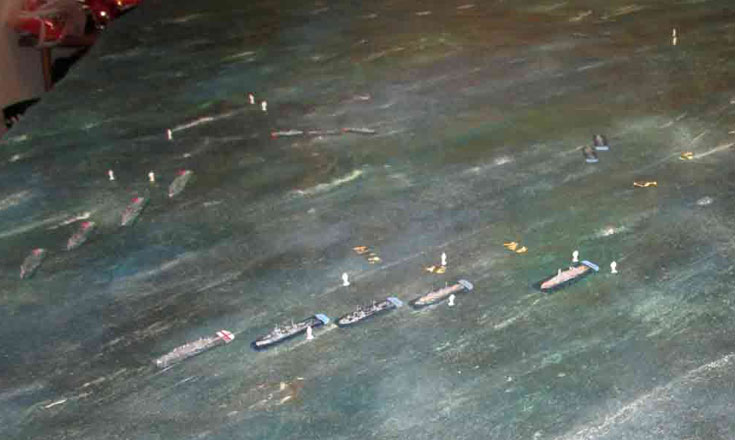 We were all at sea this week. I haven’t played a Second World War naval game for the best part of three years – since Dougie Trail moved south, and took his Italian fleet with him. About a year ago I borrowed them back, as part of a long-term exchange  which saw my Indian Mutineers head down to St. Albans. You see, we both had the matching half of two forces, and without the opposition this lead was just taking up storage space. Well, this way at least he could play mutiny games, while I could continue to wreak havoc on the Italian Navy. I also lent both fleets to my friend Colin Jack, but the chance to pick up my sea mat from the Edinburgh club led to me “borrowing” them back for a bit. So, just for something different, and because the Orkney wargamers had never played a naval game before, I laid on this little set-piece – a fictitious clash off the south-east corner of Sicily.

There wasn’t much subtlety to the game. What I wanted was for the players to get their head around the rules, and for me to re-learn them. General Quarters 3 are terrific, and what I really like is they let you play games based solely on the playsheet and the ship record cards. Each navy has its own playsheet, which lets the designers factor in a lot of stuff about gunnery that isn’t relevant to every fleet. For instance, the British are better at damage control than the Italians, while the British light cruisers with their 6-inch guns have a powerful capacity for rapid fire at ranges of 12,000 yards or less, which give them an edge over their Italian counterparts. Similarly Italian morale isn’t nearly as good as that enjoyed by the British, which of course is only right and proper. We balanced all this by giving the Italians more ships.

So, on with the game. Both sides had similar-sized forces. The Italians had a battleship (the Caio Duilio), two heavy cruisers (Trento and Trieste), two light cruisers (Luigi Cadorna and Alberico de Barbiano), and six Soldati class destroyers. The British force consisted of the battleship Malaya, the heavy cruiser Suffolk, and three light cruisers (Liverpool, Ajax and HMAS Sydney), accompanied by four H class destroyers. We started the game with the rival fleets about 30,000 yards apart – 15 nautical miles. That put the battleships within extreme range of each other. The two forces closed rapidly – Joe handling his Italians with aplomb, and concentrating his fire – when his cruisers came within range – on the British destroyers. For his part Gyles (playing the British) had his cruisers fire on their Italian counterparts. Soon both sides were scoring telling hits. Both Italian heavy cruisers were hit by 6-inch shells from Sydney and Ajax, while Malaya and Caio Duilio traded blows as the range between them fell to 15,000 yards (7 1/2 nautical miles). At that distance they kept their range, turned to port and fired broadsides at each other.

The Italian destroyers were divvied up into two divisions, each of three ships. The ones screening their battleship were reasonably unscathed during the battle, although Artigliere had all her 4.7-inch guns knocked out. Her two consorts Aviere and Ascari weren’t even scratched during the battle. The four British destroyers weren’t so lucky. Both Havoc and Hasty had all their guns knocked out, and their speed reduced to a crawl. Hasty also suffered a rudder hit, and spent most of the game turning to starboard. Hero wasn’t quite so lucky – an 8-inch shell from Trieste hit her forward turret, and the crew failed to save the magazine. She blew up. Italian elation was short lived, as the next turn the same fate befell the destroyer Lanciere. The Bersagliere was also badly hit, and limped out of the battle, as did her consort Camicia Nere, who had all her guns knocked out.

Meanwhile the two battleships were fighting their own private duel. First the Italian battleship lost “B” turret, then her 12.6-inch shells hit Malaya’s “A” and “B” turrets, putting both out of action. Later on “X” turret was also hit, causing a fire that almost spread to the magazine, before her crew flooded it. That left the venerable British battleship with just one working turret. By the end of the game Caio Duilio was suffering too – she lost two turrets, her speed was down to just 12 knots, and a fire had broken out on her boat deck. She rolled a moral test, and wisely decided to head for home. Just as wisely, Malaya did the same. That left the cruisers, who were now busily firing at each other. Essentially both sides had four cruisers, and each began firing at their counterpart in the enemy line. The range was down to just 10,000 yards (5 nautical miles), and soon the British rapid fire capability was beginning to have a real impact. Chunks started flying off the Italian cruisers – the most effective gunnery coming from Liverpool, whose twelve 6-inch guns made her something of a floating death star.

Over the next few turns both Trento and Trieste had multiple hull hits, and suffered flooding damage. Trieste also had two of her 8-inch turrets knocked out. The two Italian light cruisers were also suffering, and both decided to break off the action when half of their hull boxes were knocked out. This was pretty much the saving of the Luigi Cadorna, who also had all of her 6-inch guns knocked out. Still, the battle wasn’t exactly one sided. Suffolk lost both of her forward turrets, as did Sydney. During the final turns the Italians concentrated their fire on Liverpool, and soon she was being hit repeatedly. By the end of the game she was still afloat, but was withdrawing from the action, with her speed reduced to just 10 knots, all of her turrets knocked out, and several of her secondary guns silenced too. Both sides pulled away from each other, after firing off a flurry of torpedoes to discourage the enemy from following. That was pretty much the end of the game. In previous Mediterranean clashes the Italians were always pummelled by the Royal Navy. This time the honours were fairly even – both sides losing a destroyer, but also having a large part of their fleet effectively put out of action. The rules worked well, once everyone got their heads around the rather confusing playsheets, and the guys enjoyed playing something different. Next time we’ll add some aircraft, and concoct a scenario that gives both sides a reason for fighting. It certainly won’t be three years until the next clash in the Mediterranean.