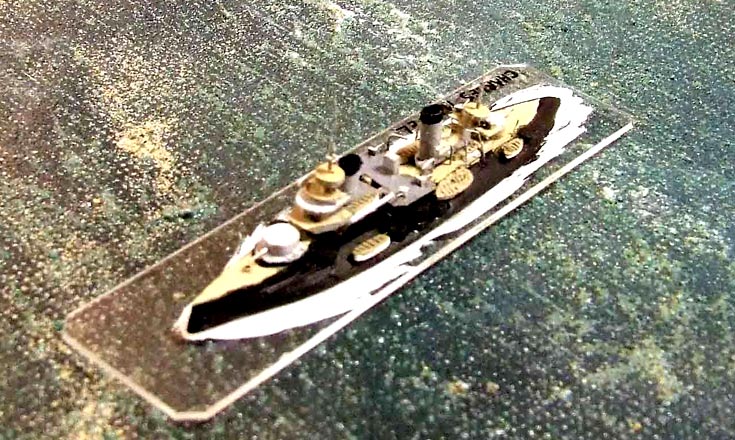 Whenever we want to play a game which doesn’t involve much effort, we tend to opt for something nautical. As the period between Christmas and New Year is a time of laziness (unless you’re a self-employed author with deadlines), I reached for a box of ships. Similarly, whenever we play a naval game, we always put too many toys on the table. This time we opted for just three a side, so we could concentrate on drinking heavily and talking geeky nonsense at the same time. The marvellous scratch built ships are from my collection, the work of the late Mike Earll.

You won’t find this battle in the history books. It was a non-historical scrap, pitching an Austro-Hungarian pre-dreadnought and cruiser and a French battleship against three German pre-dreadnoughts. Okay, the “Allies” were a little out-gunned, but worse things happen at sea…

The rules we use are Perfidious Albion, available as a download from A&A Games. The very simple rules work a little like a glorified game of “battleships”; you have a percentage chance of hitting with each gun, and when you do, you roll to see where it hits. That’s the fun bit, as for the most part you roll a D10 and a D6, which corresponds to a square on your Ship Card. If your shell penetrates the armour there, you knock out the square. Some squares don’t contain anything important, but others have steering gear, propulsion systems, gun turrets, or magazines in them. There are a few nice subtleties to the game, but not enough to get in the way of a jolly good “old school” game.

In our little scrap, the two sides slogged it out, and to make things interesting Dougie (commanding the “Allies”) sent his cruiser in a suicide mission to ram the largest German battleship. He hit it, but went down in the attempt, when a shell hit his magazine! The Austrians and French certainly had the worst of the engagement, and in the final turn the Charles Martel was hit in one of her ammunition hoists. The owning player has the option to flood his magazine, which puts the turret out of action, or roll a “Crew Test”, to see if the Damage Control Parties save the day. The Allied commander gambled and lost, so …. BOOM!

At that point we decided to draw a veil over the proceedings, and let the remaining Austrian ship run itself onto the beach to prevent it going down. Actually, this was something of a Pyrrhic victory for me, as on the penultimate turn an Austrian shell penetrated the Conning Tower of my flagship, the Deutschland, killing everybody inside. As a result my 1/1200 scale alter ego never lived to enjoy the fruits of victory!