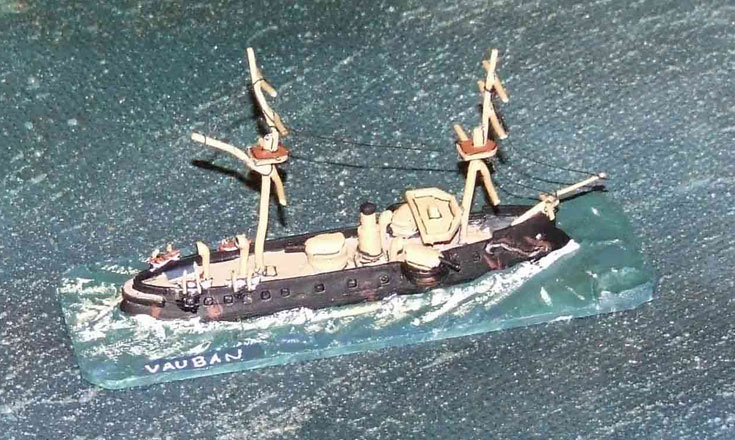 We’d planned to play a Seven Years War game this week, but at the 11th hour wargame buddy Dave Imrie called and cancelled – after spending an hour in a traffic jam on the approaches to the Forth Road Bridge he failed his morale test and headed home. So, with the SYW on hold I looked around for something quick and easy to lay on – which usually means a naval game – minimal set-up, and very little hassle.  I grabbed by file boxes of pre-dreadnoughts, and headed for the club…

We pitted a small French squadron against a similar-sized British one. All these ships were around in 1890, when ship design was at its funkiest. The game was really something of a turkey shoot – all went well at long range, but as the fleets drew closer the French found themselves seriously outgunned – their ships simply weren’t as good as their Royal Navy equivalents.

The first to go was the Devastation, her magazine hit by a shot from one of HMS Inflexible‘s 100-ton muzzle-loaders. By that time the two fleets were pretty much intertwined, and a French torpedo boat attack achieved nothing. Next it was the turn of the Formidable, which was rammed by HMS Edinburgh, which wrecked her steering gear and started a flood which wouldn’t stop until she slipped beneath the waves.

We called a halt to the massacre when the Terrible was surrounded by the Inflexible, the Rodney and the Camperdown, and was being pummeled into scrap. That left the Requien and the armoured cruiser Vauban relatively undamaged, and able to slink off back to Brest.

On the British side, the only serious damage was suffered by the Inflexible, which was hit twice below the waterline, causing some serious flooding. The French really are natural victims at sea, and once again the honour of the Royal Navy was upheld. Pink gins all round…