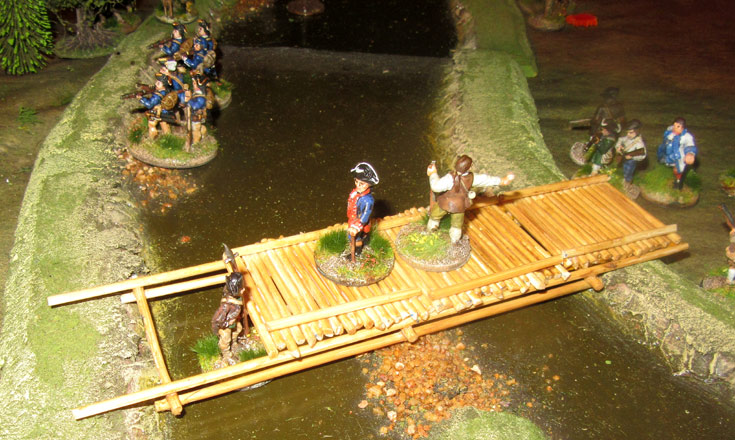 This week it was just Sean and I, so he opted for a French & Indian Wars game. I got to choose the scenario though, which involved the French building a bridge across the Mohawk River, so they could bring their big guns into action against the British forts there. The bridge took about 40 minutes to work, thanks to a pack of bamboo skewers from Poundland. I made it in sections, so we could chart the progress of the bridge-building as the game went on. In this one, I played the British, and Sean played the French. 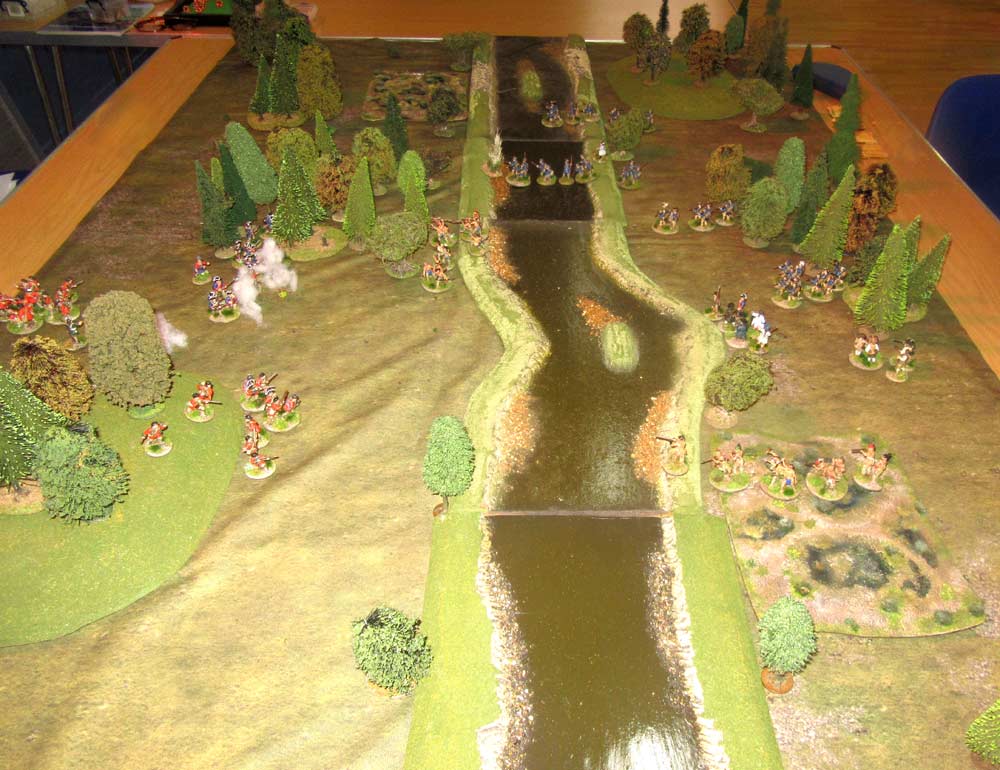 We both had 30 points of troops, which equates to around six 12-figure units per side. Sean also had two six-figure units of French engineers. When I arrived at the club I could have kicked myself as I actually have the perfect figures in my Seven Years War collection – and I forgot to bring them. Still, we made do with militia, guided by suitably smart-looking officer figures. The river ran down the middle of the 6×4 foot table, with the French on one side and the British on the other. Sean’s objective was to get the bridge built by nightfall – and my job was to stop him. 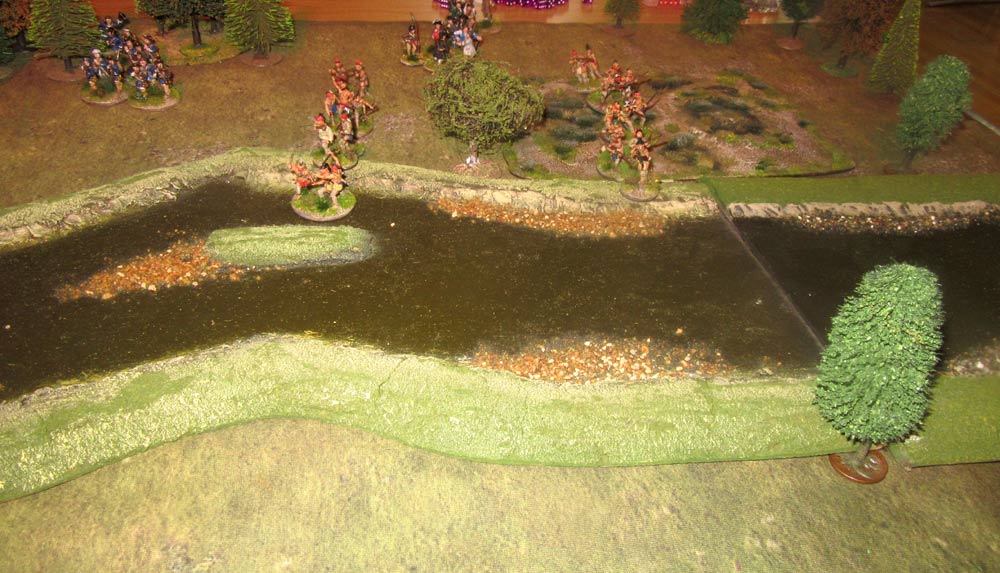 It sounded easy – and it might have been if I’d remembered the victory conditions. The French had two units of Abenakis, two of French line, and two of  the Companie de la Marine (rated as light infantry). I had two of British Light Infantry, two of Provincial Line and two 6-man skirmish units of Rangers. Apart from them and the two 6-man engineer detachments, all the other units in the game were 12 figures strong. 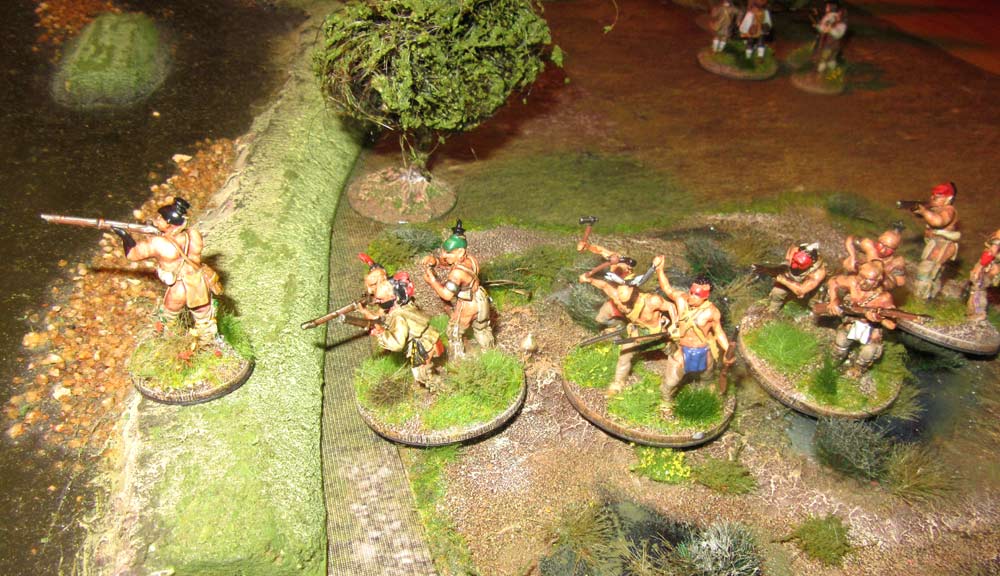 The French began by sending their Abenakis  wading across the river. It was fordable, and classed as “difficult” terrain – which didn’t stop the Native Americans, or the light infantry for that matter. I opened up on the Abenaki with just about everything I’d got, and their war parties were whittled down as they waded across the Mohawk River. The French Marines though, crossed further downstream, out of range of my British defenders. More importantly, behind the Indians came the French regulars, escorting the engineers. 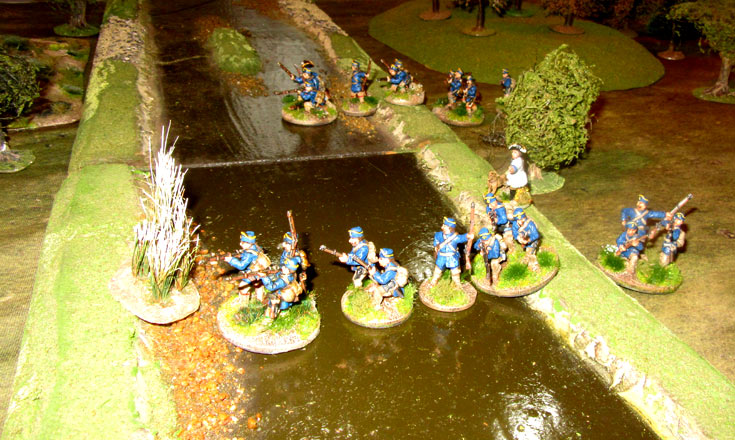 When the game began I wasn’t sure where they were going to build their bridge, but it became pretty evident when they reached the northern river bank. The trouble was, in the rules I pretty much have to fire at the closest unit, and Sean did an excellent job of screening them with his Indians. When they became whittled down to below half strength the French regulars became the screen.

Meanwhile the French Marines had crossed to the southern bank of the river, and were fanning out through a small wood to enfilade my firing line. It wasn’t going to be easy stopping them, so I pulled back my two units – heck, let’s call them companies – of Massachusetts provincials, as they don’t do so well in woods as the French light infantry. 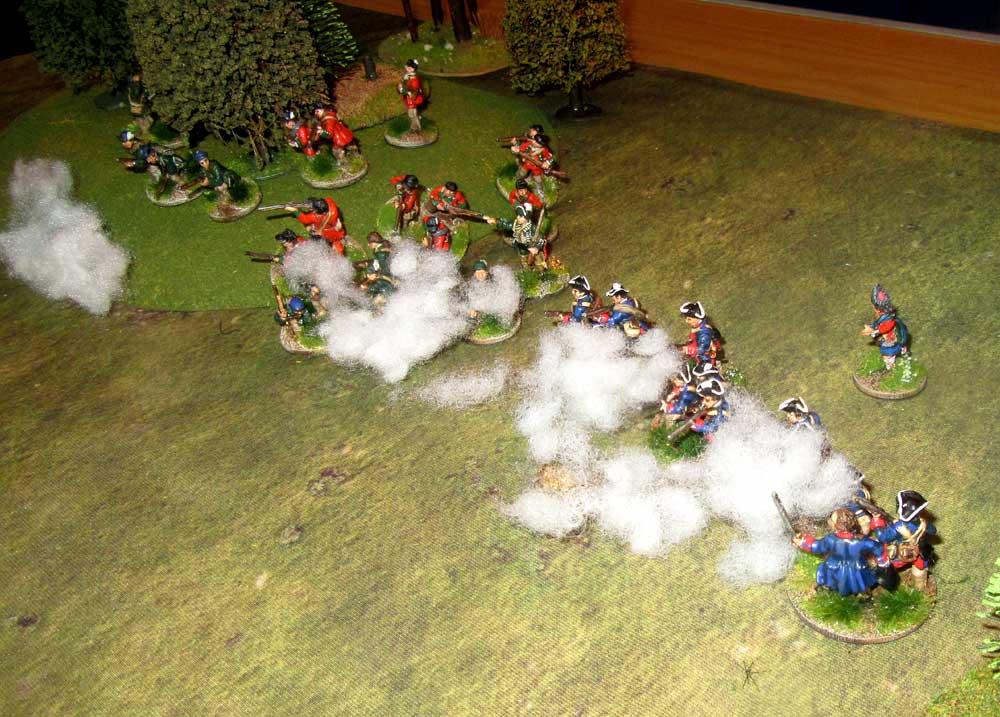 In the military  parlance of the time it meant I had to “refuse my left flank”, which in reality meant they weren’t well-placed to shoot up the bridge-builders. Sean was rolling really well for his engineers. You see, normally you need a “6” on 2D6 to activate a unit, with an extra +1 if there’s an officer nearby. Sean kept rolling high, and with two teams of engineers the bridge was being built at great speed! 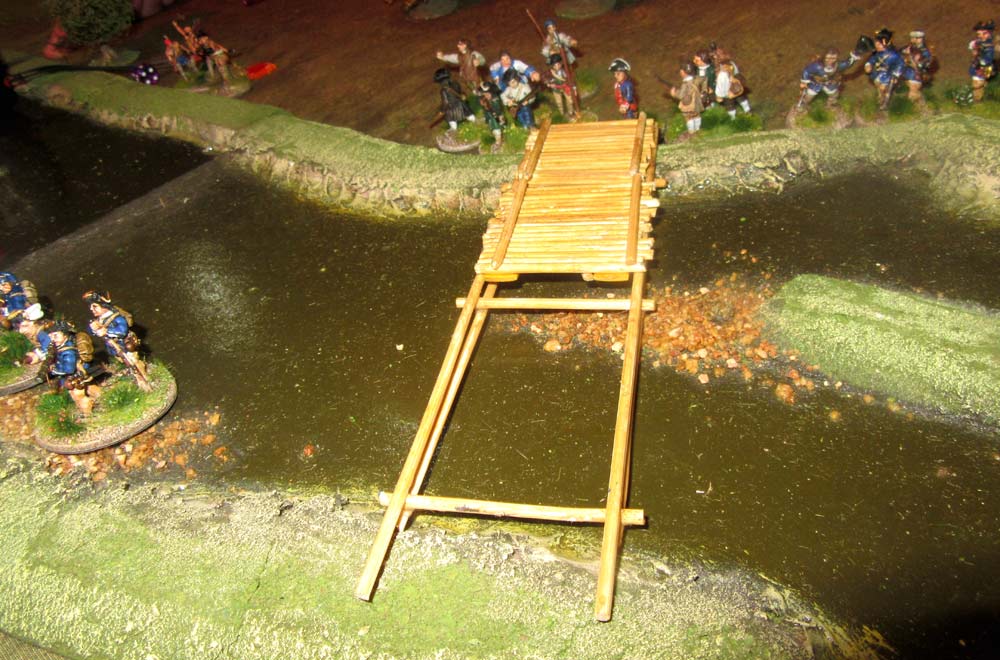 The way my bamboo skewer bridge worked, it had a base frame and four  2″ sections. He needed 60 points to build the bridge, and when he reached 15 he got another section. The first one came with the base frame. So, in the picture above it was already half-built. 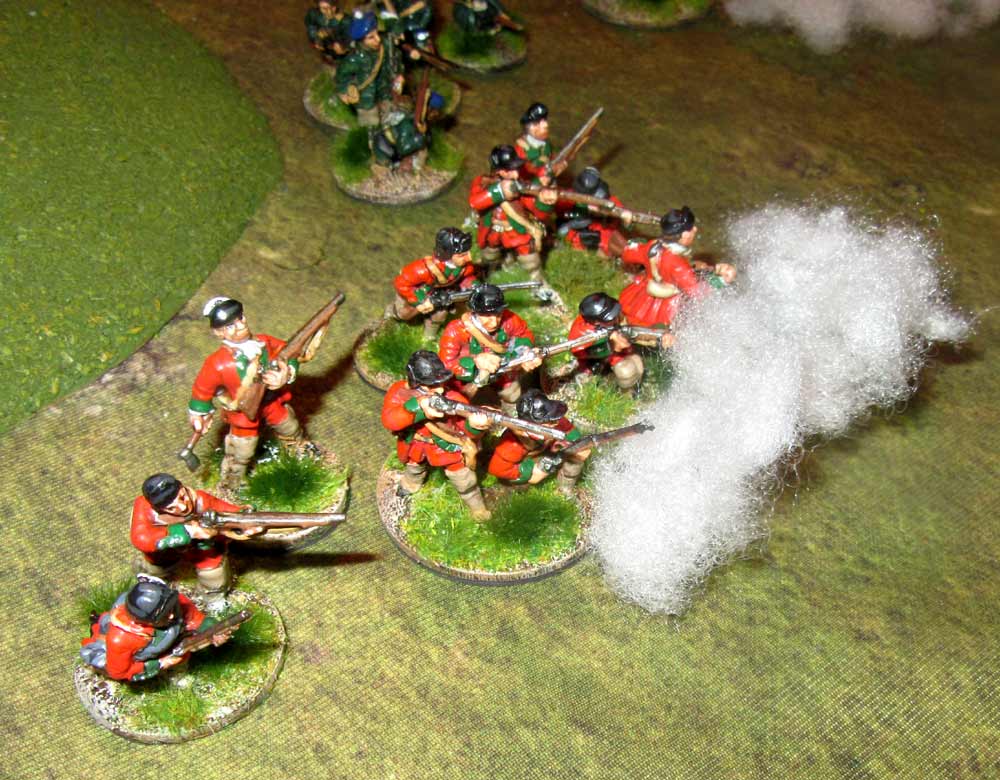 The real trouble was I wasn’t far enough forward to hit the engineers. So, I moved one of my light infantry units up to the river bank, supported by some rangers. That’s them up above. I now was able to start shooting the engineers, and wore one unit down to three figures. It wasn’t enough though, as Sean just moved his screen round to protect them a bit better. He also rolled a double 6 on activating a unit, and was rewarded with a unit of reinforcements – a small unit of good-quality skirmishers – Coureurs de Bois. 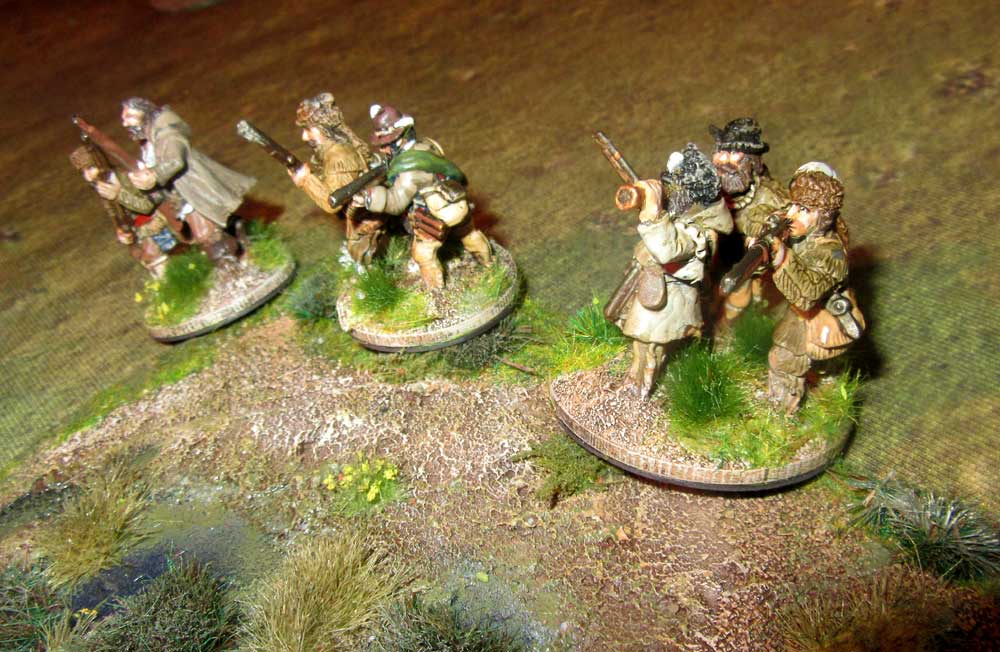 Still, his men were really taking a lot of punishment.  The Compagnies franches de la marine were in action now, but a few well-placed volleys from the Massachusetts men and some Rangers whittled their leading unit down to half strength.  By now though, it was all over bar the shouting. I couldn’t get at the all-important engineers, and they were building their bridge in record time! 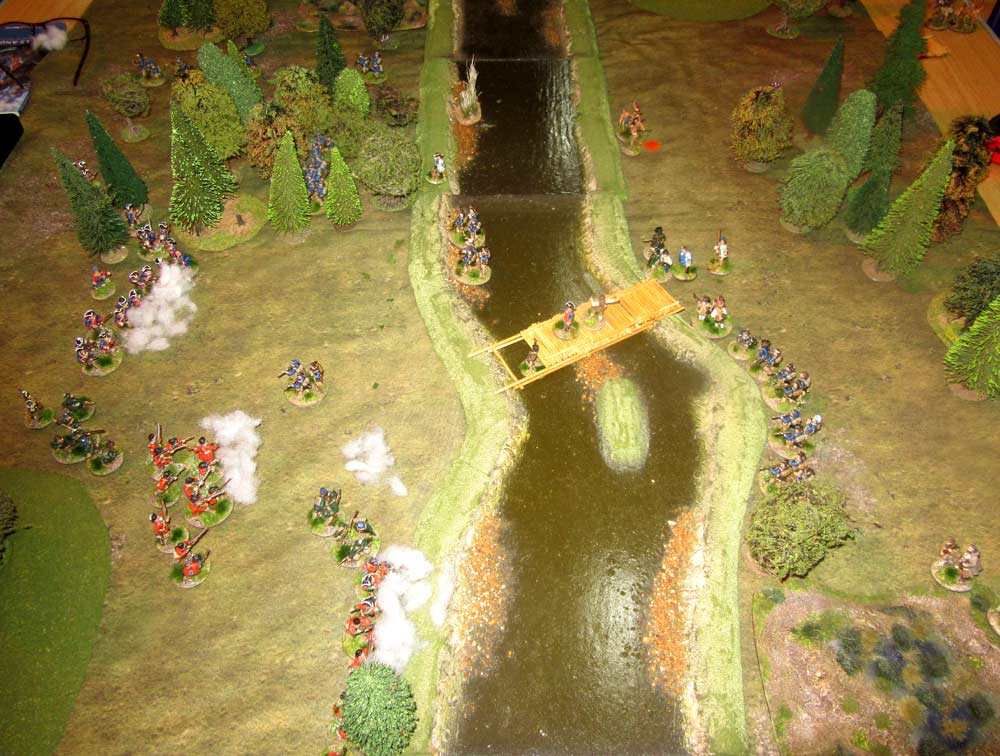 I took solace in the cost I was inflicting on the other French units, which, now the Abenakis had fallen back or broken, were all French regulars and marines. It wasn’t enough though, and Sean casually finished the last section just as the sun was beginning to set. We’d actually been rolling to end the game from Turn 8 on, and it was still going on Turn 11, when the engineers finished their work. So, the game was an empathic French victory. It was great fun to play too, and the first game using my new “circular” basing system (below). 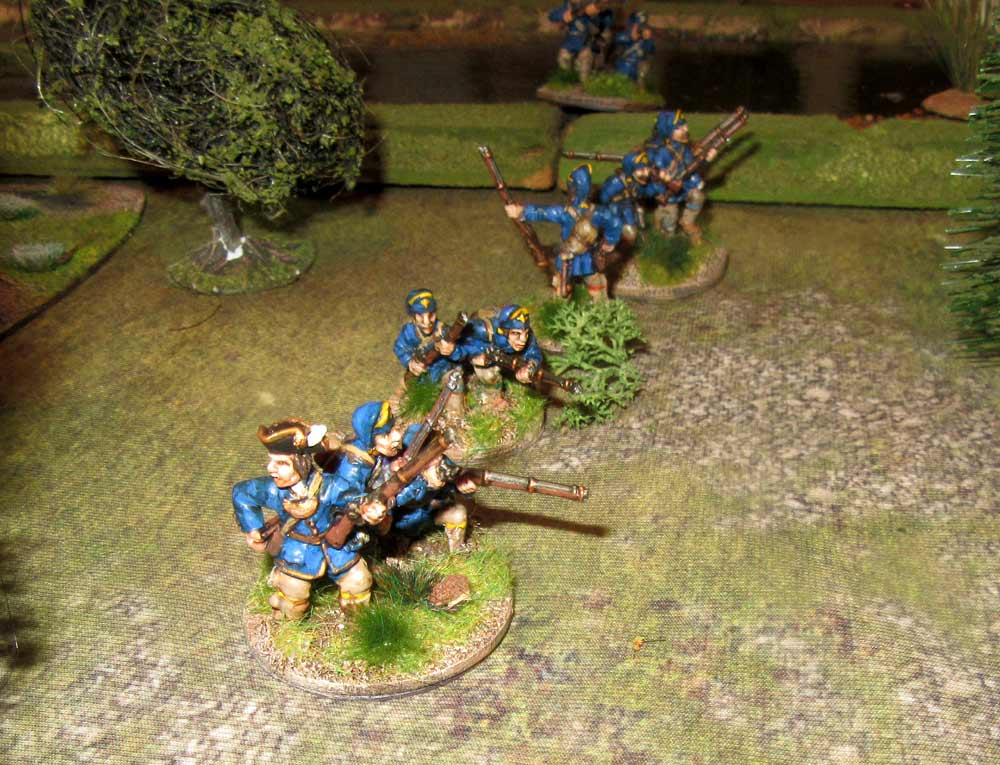