There’s still no sign of the Orkney club opening in the foreseeable future, so instead we held another game in my house. This time we headed off to the South-West Pacific, for a clash set on the north coast of Guadalcanal. This was a “Big CoC” game, where both sides had more than one platoon on the table. Gyles and Shane took the Americans, while Lindsay and I fielded the Japanese. 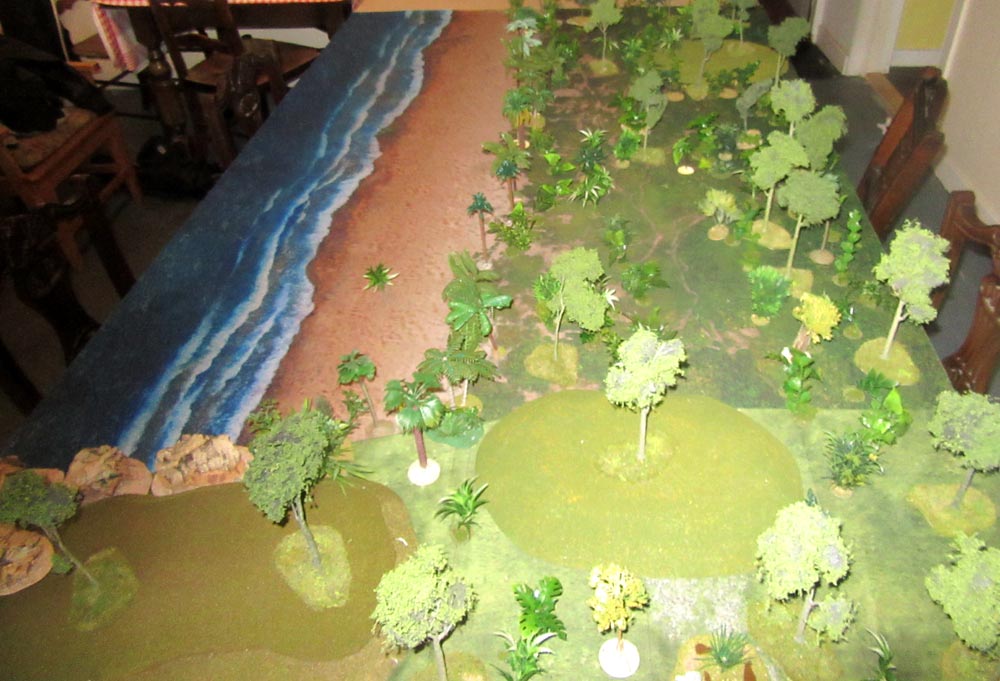 The scenario was described as “a probe”, with the Americans starting on the beach between the Matanikau River and Point Cruz to the west, and the Japanese coming on from the opposite or southern long table edge, advancing through the jungle. The game was played out on a 7×4 foot table, although at least a foot of the width was taken up by the sea. In this then, the Americans – a mixed bag of US infantry and US Marines – began with their backs to the sea. The idea was, they were advancing west along the beach towards Point Cruz – the headland at the end of the table – when their scouts reported Japs approaching through the jungle. 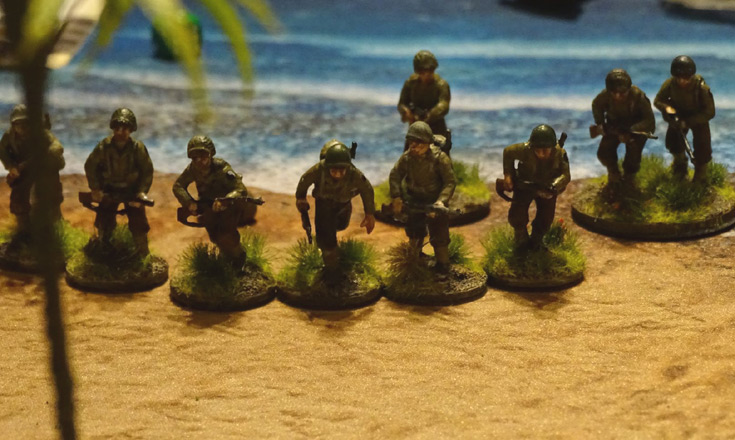 As usual with Chain of Command (CoC), the game began with the patrol phase. Both Gyles and Lindsay moved up their patrol markers, until both sides were “locked down”. This meant that for the most part the Americans were actually forced to stick their four jump-off points on the beach – representing supply caches I suppose – while the Japanese were quite far forward in the jungle.

On the American right Gyles commanded a platoon of the US 7th Marines, while to his left, Shane followed behind him with another platoon from the same battalion. As we didn’t have enough USMC figures, Gyles used my regular US Infantry instead. For us, Lindsay faced off Shane on our right, while I squared off against Gyles on her left. Our troops were from the Japanese 4th Infantry Regiment. 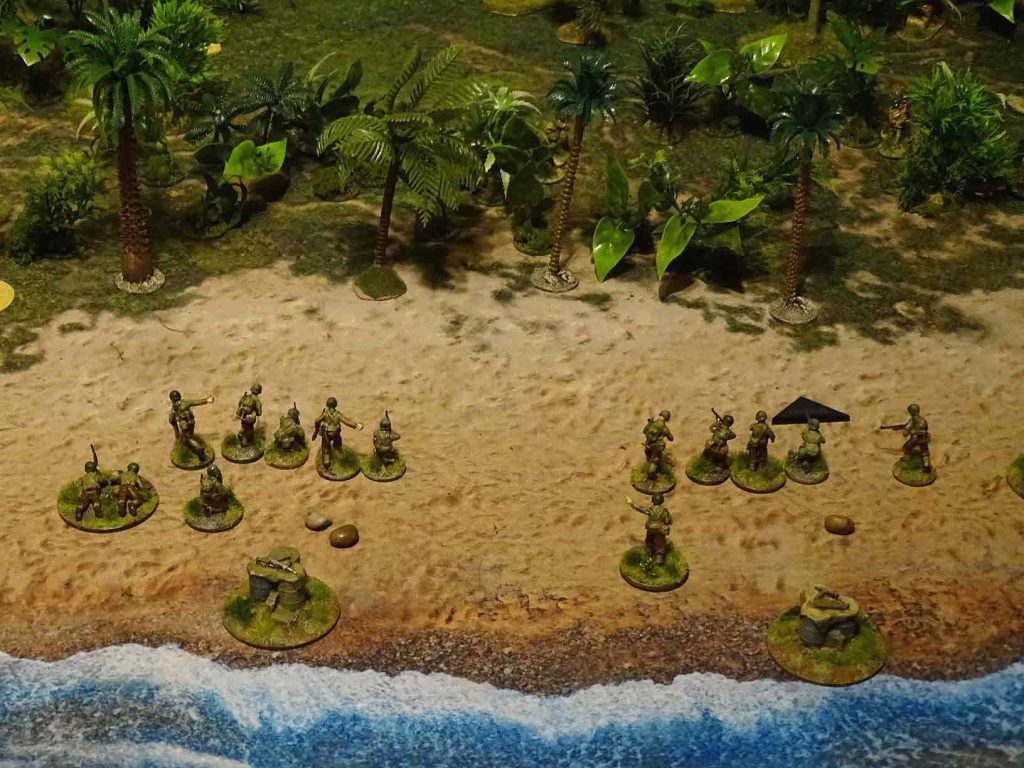 Problems started to pile up for the Marines from the start. I advanced to within effective range of Gyles’ platoon, and opened up with everything I had. Gyles got the benefit of soft cover as I was still firing through a belt of jungle, but he must have felt very exposed out there on the beach. Instead of advancing, he went “tactical”, scraped holes in the sand, and started firing back. 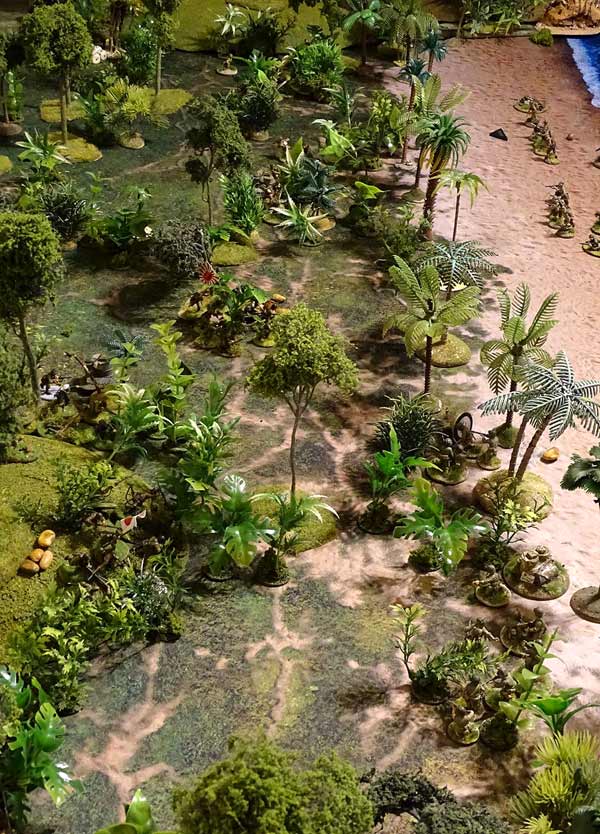 Over to Gyles’ left, Shane had managed to get one of his two jump-off points into the edge of the jungle, so that’s where he began sending his troops. Opposite him, Lindsay deployed everything she had from the very start, and closed in on the Marines’ jungle enclave. She then launched a full-on Banzai charge. While it didn’t work too well – the attackers got shot up badly – she bought enough time for the rest of her force to move up close to the American positions. Over there, things developed into a full-on firefight. 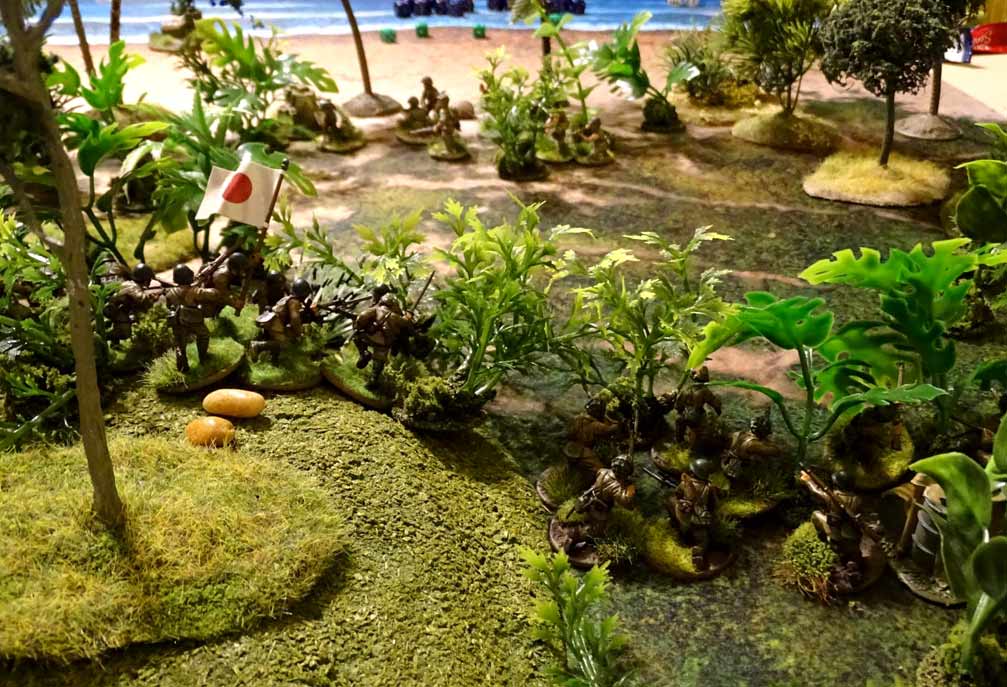 Closer to Point Cruz, Gyles started taking some real casualties. I had some pretty good luck with my Command Dice, getting a couple of second goes. Best of all, while the Marines were pinned down on the beach, my third section and my forward artillery observer had been sneaking around the side, and finally reached the rocky slopes of Point Cruz. That meant they now enfiladed the Marines, and there was no jungle to get in the way of their shooting. 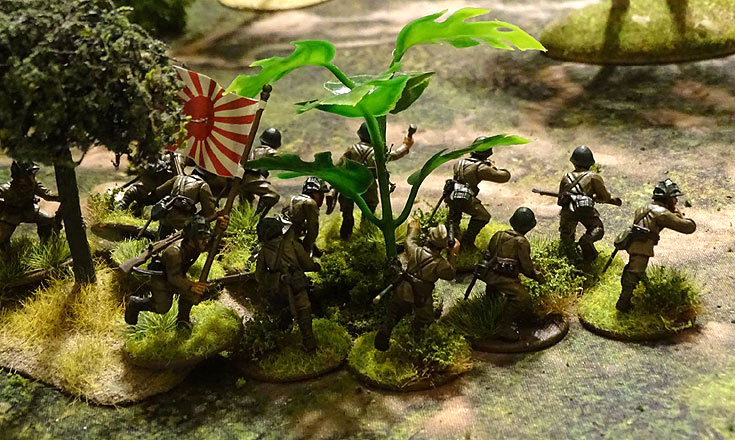 From that point on, it was all over for Gyles’ platoon. First one squad broke, then another, and finally he lost his platoon commander, left on his own amid a pile of bodies. My light mortars were pounding quite effectively too, and within a couple of phases Gyles’ survivors broke and ran, when his Force Morale dropped to “0”. However, Shane was still very much in the fight. 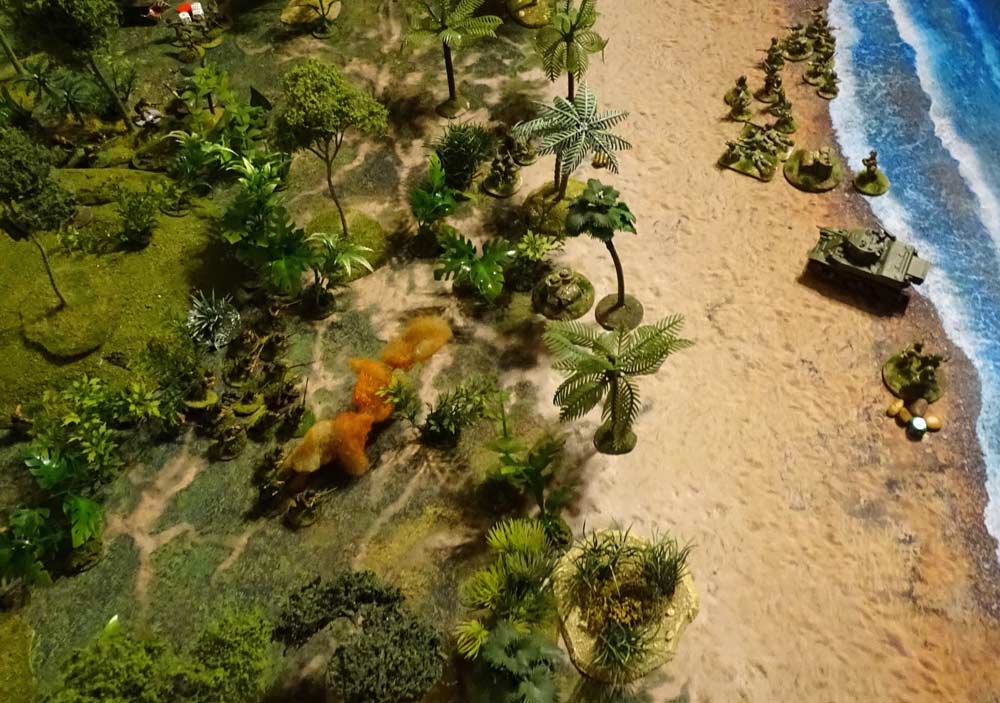 By then he’d brought up his support options – a flamethrower team and a Start light tank. Purists will notice that this model id the wrong kind of Stuart for Guadalcanal, but heck – you use what you’ve got! His flamethrower did well hosing down the Japanese in the jungle, right up to the point when Lindsay brought up her own flamethrower – and a tank – a Chi Ha. For the next couple of phases they settled down to a tank on tank and flame on flame duel! It was quite a sight – especially the flamethrowers, which proved both spectacular and deadly. 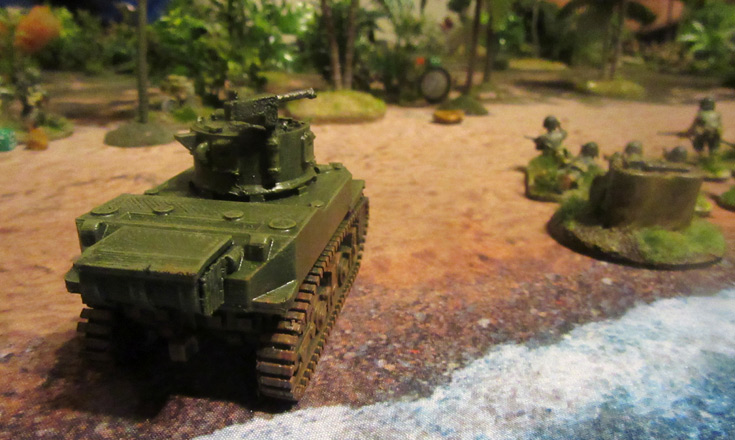 The tank duel was a little less effective – both sides pinged away at each other, but all they managed was a largely ineffective hit on the Stuart. In the long run though, the Japanese were in the better position, and after a few turns of this Lindsay managed to silence the American flamethrower team, and neutralise the little knot of Marines holding out in the jungle. With Shane’s Force Morale dropping fast, we decided to call it a night. He didn’t have the strength to carry on the fight, and now his troops – still on the beach – were coming under Japanese artillery fire. So, the game ended with a clear Japanese win. However, their official victory objective was to reach the sea, and the closest we got was to the rocks above it, beneath Point Cruz. 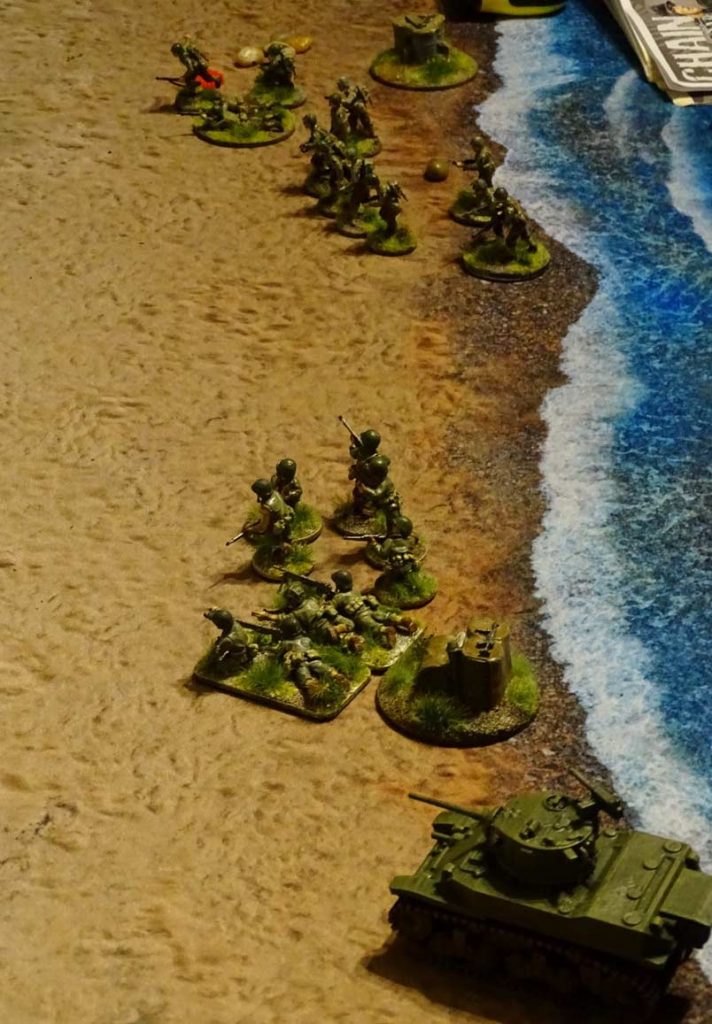 The main thing though, was tat everyone had an enjoyable evening. I was particularly keen that Shane enjoyed himself, as he’s a recent recruit to historical wargaming, having been lured over from Warhammer. I think he got a kick out of it, especially his tank and flamethrower duel. He left with thoughts of raising his own German platoon swimming around in his head. Lindsay of course, was equally thrilled by the blooding of her newly -painted Chi Ha, seen here as the survivors of the Banzai charge rout past it!