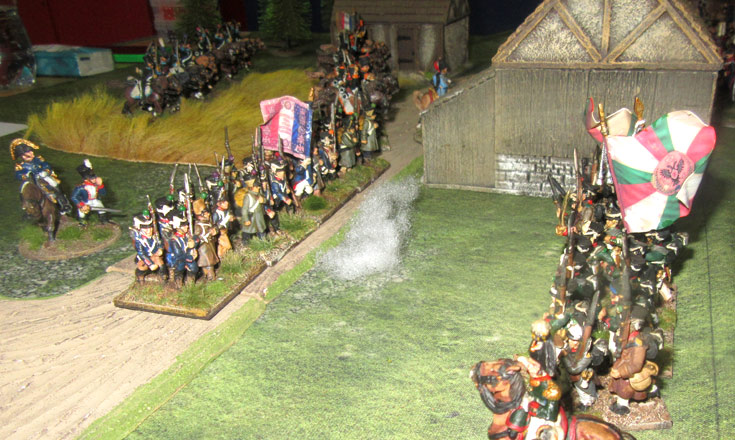 A couple of weeks ago I ran a Napoleonic game in the Orkney club, to give the guys a taste of the period. They’d played Napoleonic games before, but not for a few years, and not with these rules. They enjoyed themselves, and wanted another go. In the end only Sean could make it though, so I scaled things back, and laid on a small game, so he could get a better “handle” on the runes. In this little scrap, he played the French, while I took the Russians. The figures though, were all mine.

As this was a simple encounter battle, and a learning curve game, we had fairly small matched forces – about six battalions apiece, backed up by a single gun battery and a light cavalry brigade with two regiments in it. Oh, and I also had a sotnia of Cossacks, because no Russian army is really complete without them. We played the game on a nice, undemanding 6×4 foot table.

We both started by advancing, but it was clear that Sean wanted to form a nice defensive line, as he shook most of his troops out into line. Being Russian I didn’t rate my chances at a stand-up firefight, and so I decided to keep most of my troops in attack columns, and to go in with the bayonet. As for the cavalry, we both deployed them on the same flank, and for the first couple of turns both cavalry brigades faced each other, with neither of us wanting to make the first move.

As for the infantry fight, we both had two brigades, each of three battalions. I marched one of mine through some rough ground on my left, to appear on the French right flank. One of my three battalions there had formed line to pin the French to their front, but it suffered badly from the French guns, and from the fire of one of the enemy infantry battalions. Still, my own guns were pounding away at their French counterparts, weakening  them slightly before my troops went in.

In the centre I tried the same trick, with one battalion in line soaking up enemy fire, while the others bided their time and waited to launch a bayonet charge. Again, the French musketry proved pretty effective, and my Russian battalion in line only stayed in the fight because I kept rallying off its many hits. By now though, it was time to launch my first charge. over on the Russian left my two battalions went in, with one hitting the gun battery, and the other a French battalion, which was now switched back into column.

I had mixed fortunes. The guns were overrun, but my infantry were bounced, after a long and particularly bruising melee for both sides. My third battalion – the one in line – was also charged by a French line, and badly battered. So, two of my three battalions were now retiring, but for some reason Sean didn’t press home his advantage, and stayed where he was, dressing his line and recovering a hit apiece. Still, that’s when my brigade commander did his thing, and rallied off enough hits to keep my units in the game.

Over on the far side of the table I got bored of sitting around with my cavalry, and launched a charge. My Russian ulhans got the better of the French chasseurs-a-cheval, bundling them back through the village of Shovewitz, with just a single hit left. That meant they were on the cusp of routing off the table. My own people got a bit chewed up too though, and to get at the second French cavalry unit I had to do a bit of manouvering. This meant forming into line of squadrons, to get through the gap between the buildings. this meant fighting at a disadvantage, but it was worth it, as I felt I was on the cusp of a breakthrough.

Sure enough, the Russian hussars charged home, and although nobody came out on top, after three rounds both sides were forced to retire. This meant the French chasseurs had to interpenetrate the battered unit behind them, which in turn meant that both units lost a “hit”. So, the really battered unit at the back was swept off the table. Now it was my turn to gloat, as my cavalry – battered but victorious – began pushing forward, with the Cossacks as usual hanging on the flanks without doing much apart from lending moral support.

This helped tip the balance of the game. So, in the centre I launched my charge, with two Russian columns steaming into a French line. The defensive fire was fairly ineffective – just one hit – and the result was a pretty impressive win – so much in fact that the battered French unit retired. I followed up, and broke it. This done, my two battalions found themselves standing in what had become a big gap in the French line. So, they turned to the side and began corralling the defenders on their left – the ones who were being pressed by my other troops on their right flank and rear.

So, things were starting to fall apart for Sean’s Frenchmen. I lost one battalion – the one I had on my far left, in line. It was ripped apart by a French charge. Still, by then I’d seen off another French battalion on that side of the table, leaving Sean with just two units, with four Russian battalions hitting them from two sides. Also, my guns were still pounding them, and causing casualties. It was a pretty untenable situation.

Over near Shovewitz, the remaining French cavalry unit was forced to retire, leaving the remaining infantry battalion looking badly exposed. That was the point where we called it a day. Sean might have got badly roughed up, but he clearly enjoyed the game, and who could blame him. The rules worked a treat, and he vowed to buy a copy, and who knows – he might even start building up his own toy collection. It certainly won’t be very long before my won toys get another airing. I have to say, Over the Hills are fast becoming my favourite set of rules for this period – and I’ve just heard that a new edition is coming out, so with luck they’ll be even better.