This evening, Gyles, Lindsay and I tried out Infamy, Infamy!  for the first time. These are a new set of large-scale skirmish rules from The Too Fat Lardies stable, and looked really promising. In fact, they’re the reason I’ve been painting up a warband of Ancient Germans. This would be their first outing. The game was played out on my dining table, which at 6×3 feet was a little narrow. 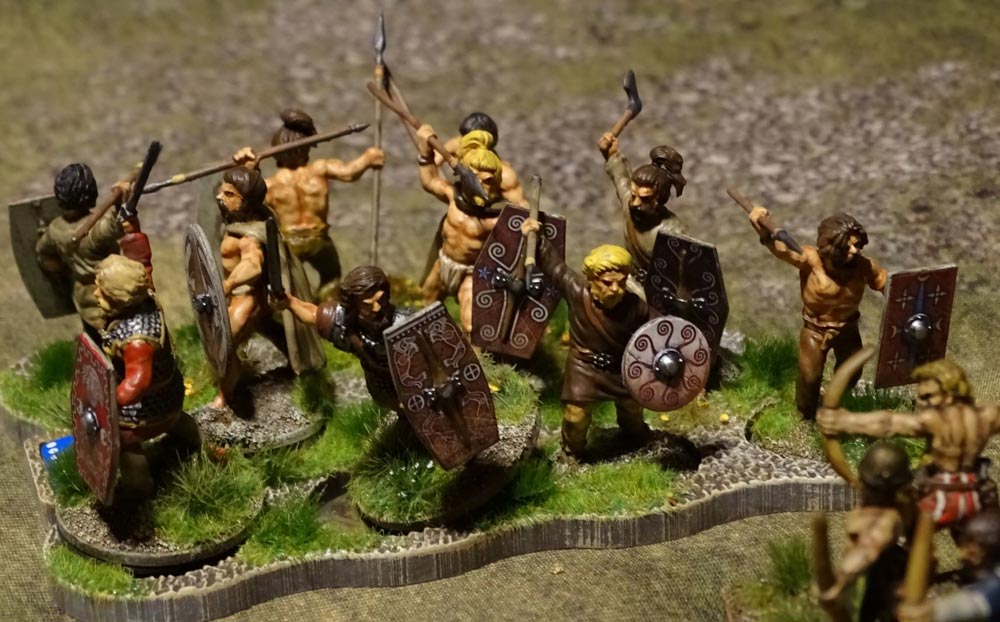 I used by Germans, masquerading as the Marsi tribe, while Gyles opted for a legionary-heavy force of Imperial Romans. Actually, as his figures are still on the painting stocks he used my Caesarean Romans, backed up by Gallic allies, also from my toy collection. As this was very much a learning curve game we expected to get a lot wrong. The rules are straightforward, but there’s a lot of nuance to master, so it’ll take quite a few games to really get it down. This then, was the first step. Of course, it didn’t help that I was playing in my own house, and therefore decided to kick the arse out of the drinks cabinet, in true barbarian fashion. So, things got hazy… 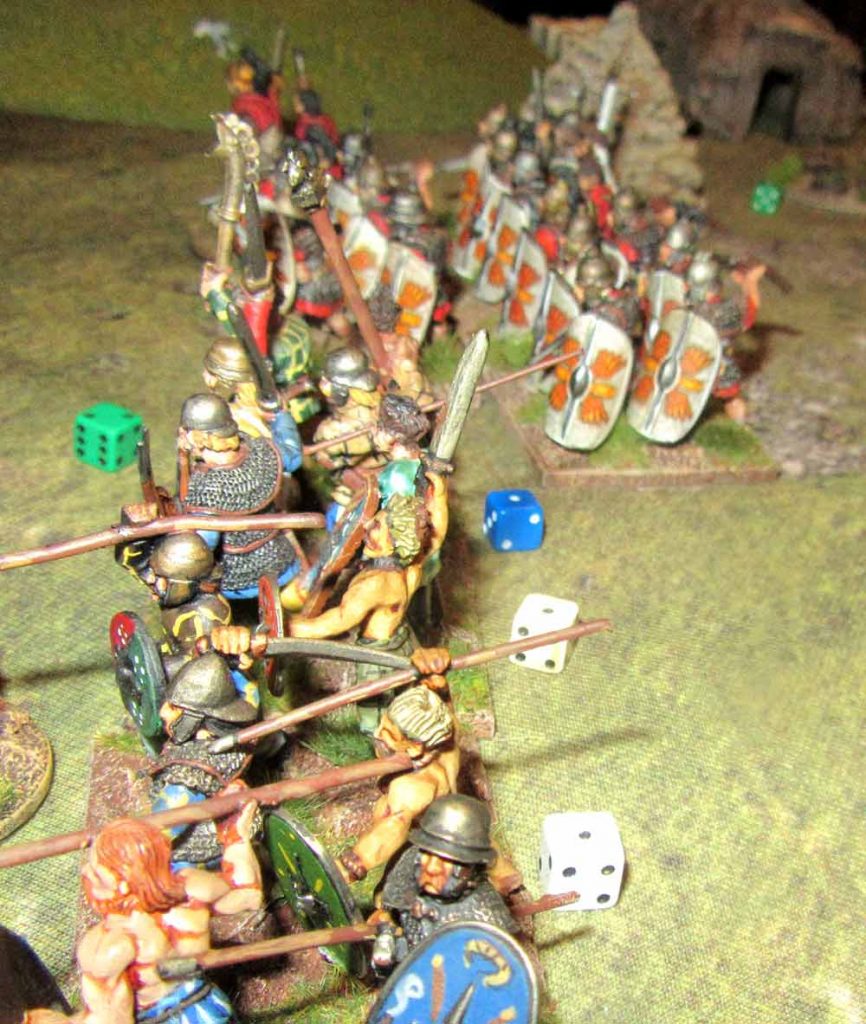 Anyway, it started well. We did the basic encounter scenario, where we both appeared from opposite long table edges. Due to the narrow table I didn’t really have the space – or patience – to egg him forward into the woods. Still, we laid our numerous “Ambush Points” in any bit of nasty-looking woody terrain we could find. The Romans tried scouting, and managed to turn one of these into a “Deployment Point” (no ambushing), but otherwise it was looking good.

The Romans plodded onto the table, leading with their auxilia and the Gallic allies. he skirmish opened with my slingers peppering a unit of Gallic allies from the flank, inflicting a few kills and hits. This though, was only the start of a dramatic turn. Then the small 8-man unit of auxila on the Roman left  tried probing into the woods there, trying to sniff out my ambush points I was still reasonably sober at this point, but lubricated enough to be rash. So, I unleashed the first of my hidden warbands – two groups of Marsi warriors. 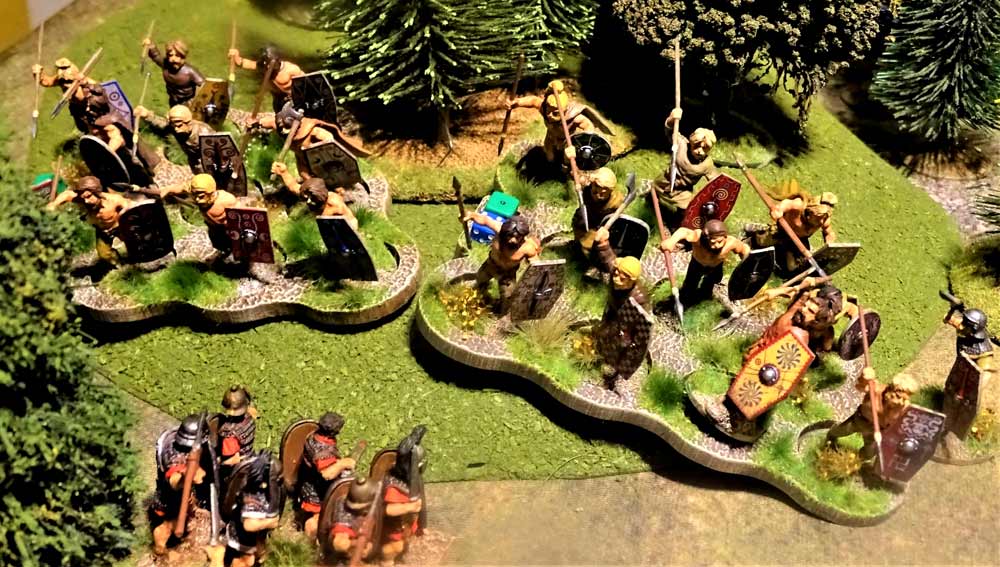 Outnumbered eight to twenty, the Romans were pushed back, and the Germans gave chase. If I’d been more sensible I’d have dipped back into the woods, rather than charging out into the open meadow.  The auxila pulled back towards their fellow Romans, and passed close to another small wood – and another German ambush point. I thought I’d be extra clever, go for the double whammy, and launch a flank attack from the wood. It seemed like a great idea, especially as the first warband were not far behind the auxila. 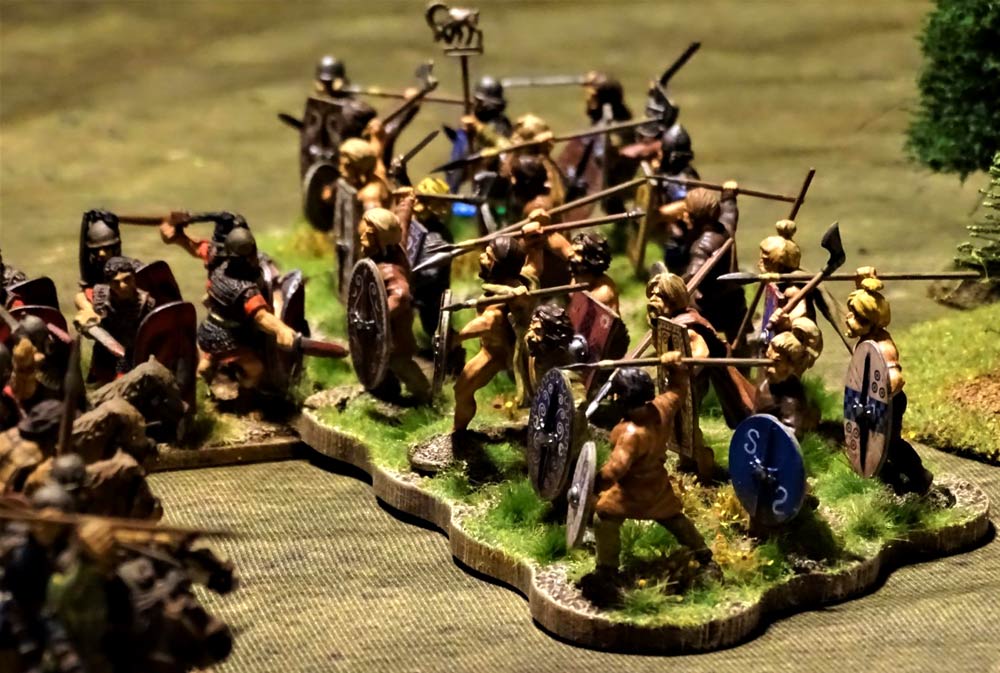 Much to my dismay, the auxila survived this second blow. I think I messed up my “Fanaticism” dice, and that sort of deprived my warriors of much of their “oomph”. that though, is the cost of drinking gin by the pint. This left them exposed to a counter-charge by a small unit of Allied Gallic cavalry, who hammered into my left-hand group of German warriors, and chopped it up before retiring. 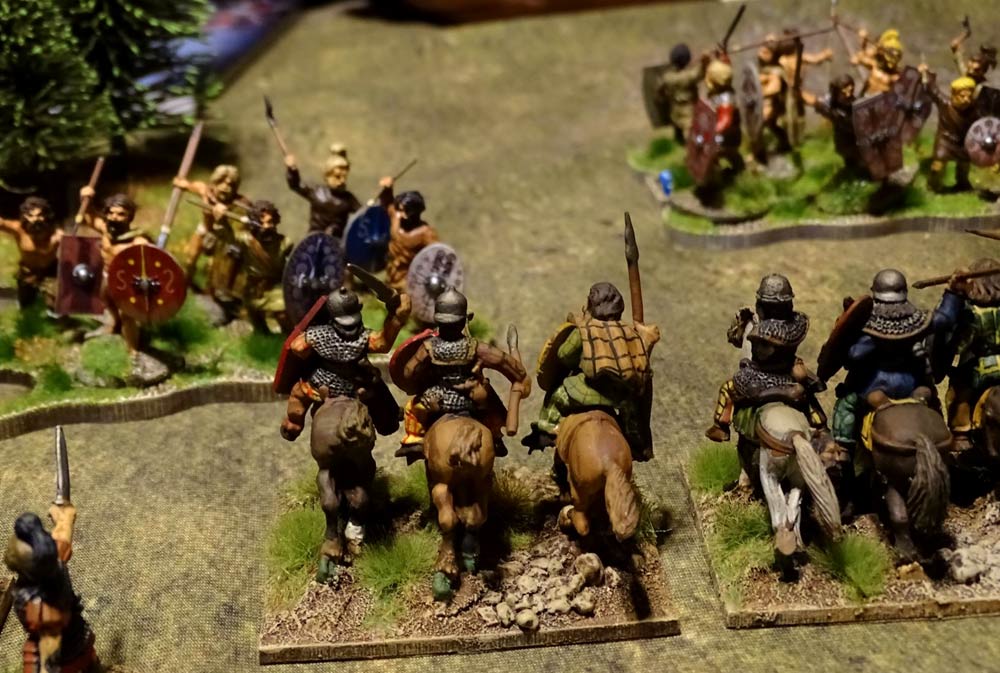 So, I was effectively pinned where I was by this cavalry, buying time for the auxila to extricate themselves. This was the turning point. I had one warband left, plus a smaller unit of six fanatics, and six skirmishing javelinmen. My hope was that I could pull back, delay the Romans with javelinmen and slingers while I lured the enemy deeper into the woods, and within range of another ambush point. 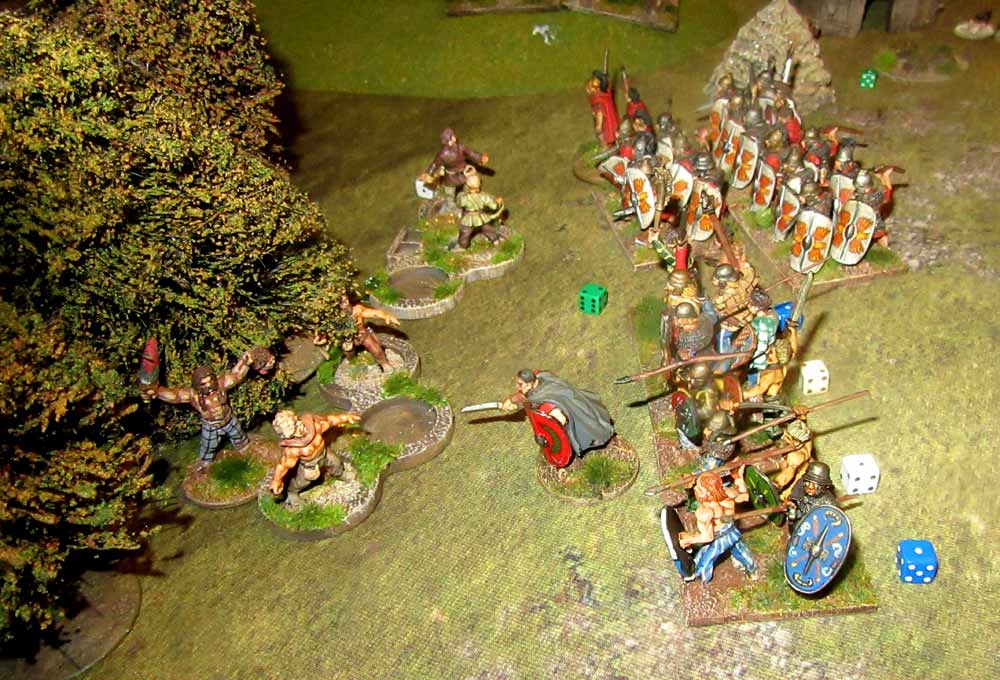 It wasn’t to be. While all this was going on my slingers on the Roman right flank had been charged by the Gauls, backed up by Gyles’ two groups of veteran Roman legionaries. When I pulled back into the wood I rolled badly, and the Gauls caught me. So, by the time I escaped I had only two figures left, and the unit was broken. So, Gyles now had a secure flank, and had freed up his best troops. 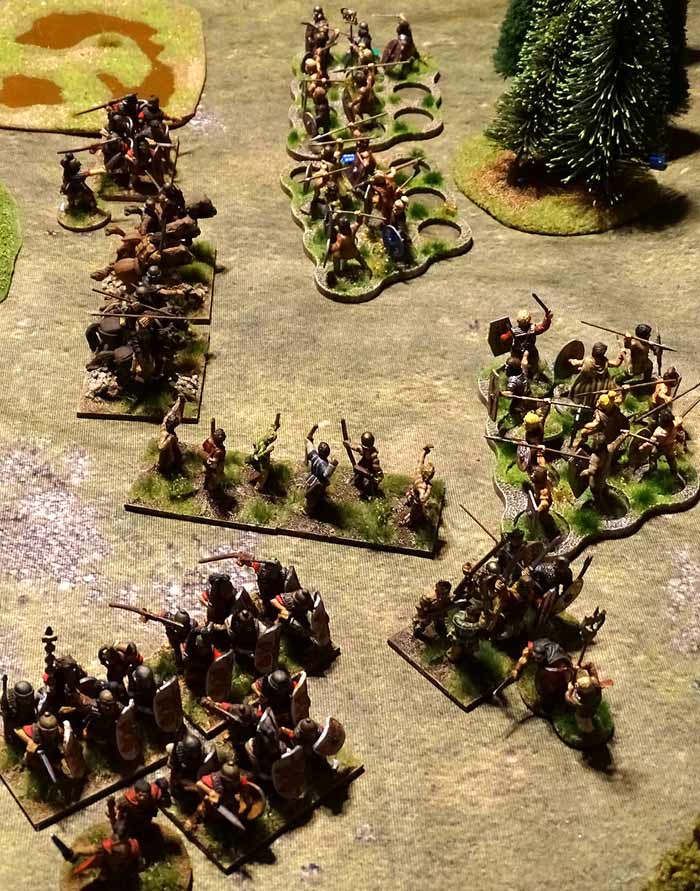 This shows the situation. At the top are two warbands – one of which was part of the initial attack. The other unit had fled back into the woods. The one at the top right is my unit of elite “oathsworn” warriors, who were having a hard time of it fighting the pesky Roman auxila. Gyles had now brought up Gallic archers to support his cavalry, while my other battered warband was busy trying to recover enough shock points to rejoin the fray. At the bottom the Romans are still facing the routing German slingers. 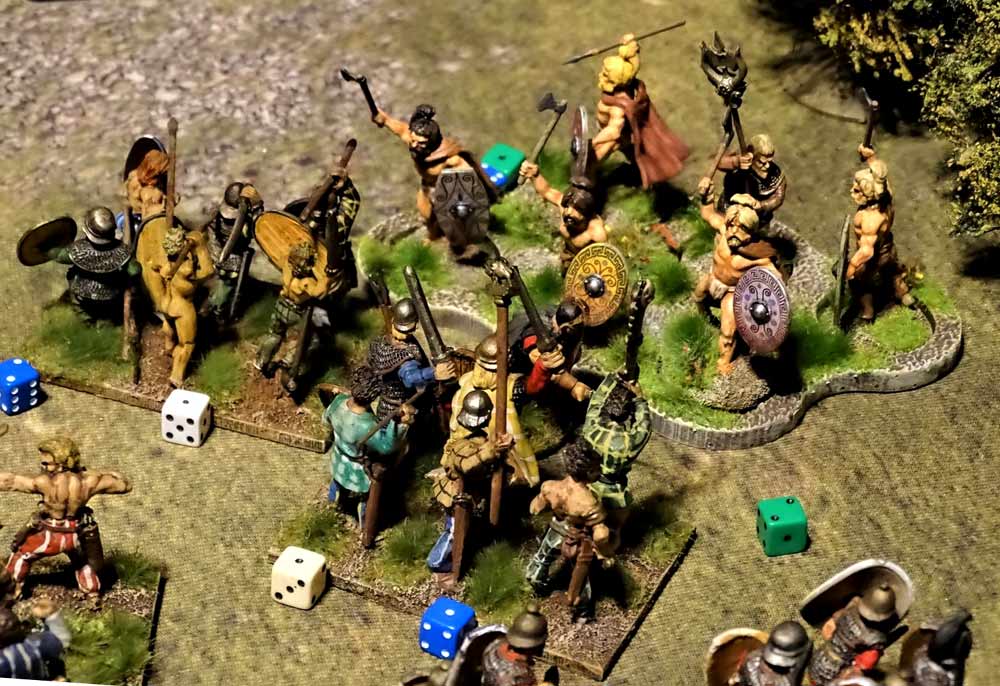 At this point I decided to reinforce failure. I couldn’t extricate my warriors, so I sent the rest in to join them. My fanatics led the way, and promptly got slaughtered. They were hit by a double sucker punch of Gallic foot and cavalry, and driven back into the woods. It turns out, by lacking armour the Germans really are a one-shot weapon. Get it right and they can sweep away everything in their path. Mess it up – and I was pretty drunk by this time – and you get chopped to pieces! 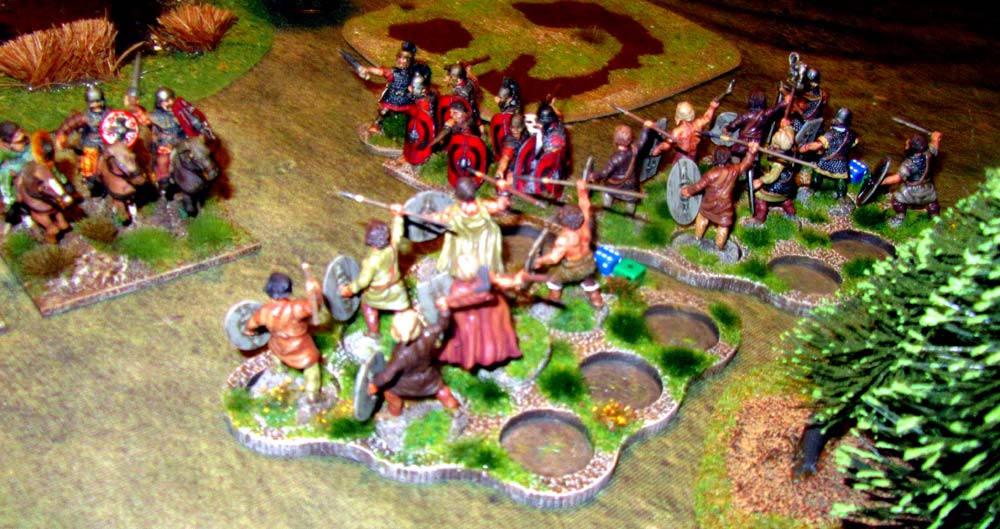 So, I was now running out of options – and gin. All my units were committed, and I was making no headway. The Romans were moving up with their veteran legionaries, and about to cut me off from the safety of the wooded Berghaltern behind me. My Morale Track – you can see the Roman one behind the slingers below – was now at IV, while the Romans were still on X. So, it was time to call it a day. So, the German war trumpets blew the retreat, and my surviving warriors slunk back into the forest to lick their wounds. It was a fun little game, albeit fast and furious, and at least we all learned a little more about how these rules work. Next time I’ll drink Coke! 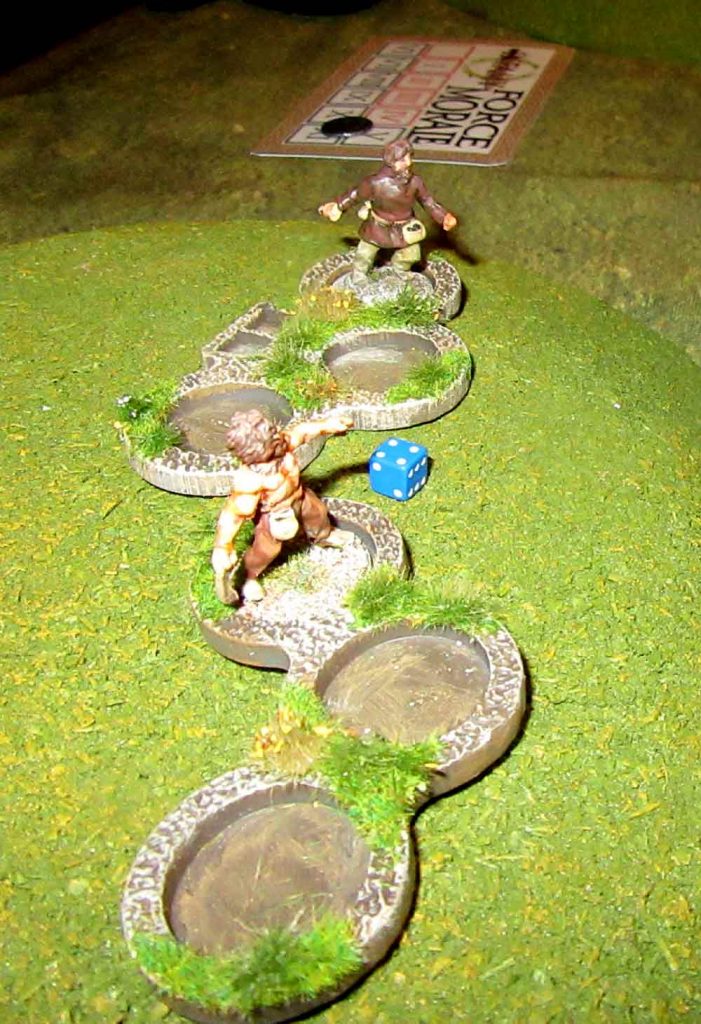 2 Responses “Ambush on the Berghaltern, 8 AD”