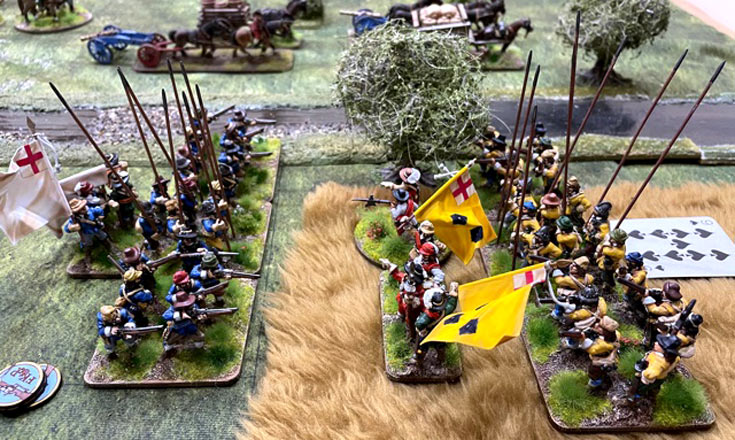 This little game saw a return to Yorkshire, and the continuing fictional clash between the Royalist Earl of Doncaster and the Parliamentarian Earl of Scunthorpe. This time, it was all about a Parliamentarian siege train. The Earl of Doncaster was besieging Barnard Castle, but to breach its walls he needed larger guns and more powder. These were duly landed at Hartlepool, and headed to the siege with a strong escort. The trouble is, Doncaster got wind of it, and sent an even larger force to capture it. 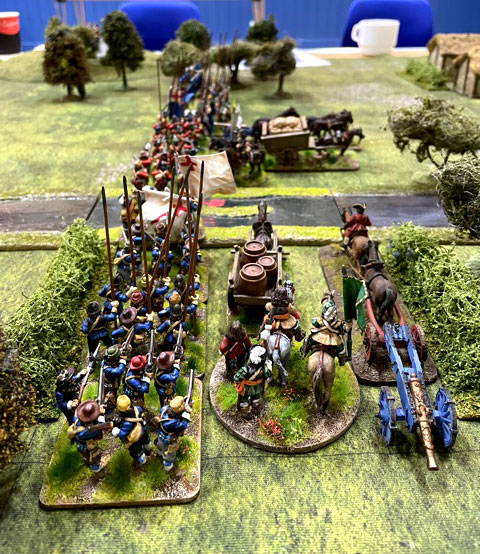 Actually, the scenario was a Charles S. Grant one, filched from an old copy of Battlegames magazine. All I did was to adapt it for the period and the rules. We played it out on a 6×4 foot table, with Nick playing the Parliamentarians and Mally the Royalists, while I sort of umpired. Also, as Nick hadn’t played these rules before, it meant I was on hand to help out. Of course, the rules are very easy to pick up, so I didn’t have to do much at all. For the Parliamentarians, they had to cross a ford over the River Plodder, and then continue on along a road which ran towards Barnard Castle. The Royalist objective of course, was to capture or destroy the siege train. 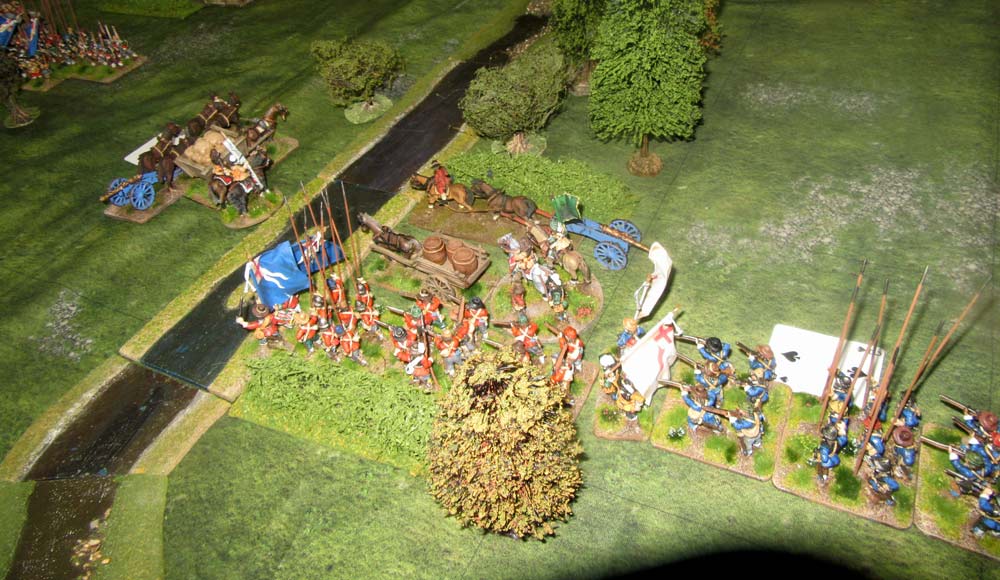 Things began well for Parliament. A scouting force of a regiment each of foot and horse was at Plodding, a little village on the southside of the river. They’d been scouting the route to the west, but had now returned to cover the river crossing. They’d just learned there were Royalists approaching from the south-east, so they expected a fight was brewing. Word was also passed to the force guarding the siege train – two regiments of foot and a raw regiment of horse. Then, just as the guns and wagons began creaking over the ford, the Royalists appeared on the south-eastern corner of the table. 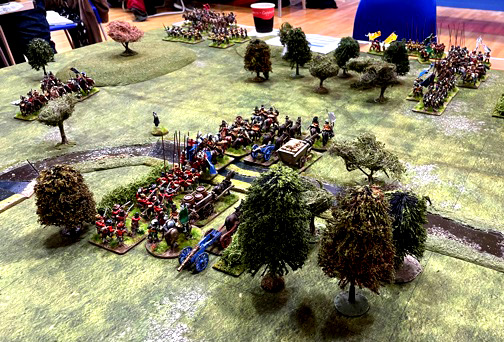 Sir William Haxby, commanding the escort, ordered Col. Arkwright’s scouting force to cover the ford as the siege train crossed. Soon a line began to form of two regiments of foot – one from the scouting force and the other coming up from the far side of the ford. . Meanwhile, Thackrey’s regiment of horse – the raw unit – advanced even further, to head off the approaching Royalist horse. Lord Darlington’s deputy Sir Newton Aycliffe was leading is advance with three horse regiments, and one of them, Greenwood’s, was approaching from the north-east corner, having been scouting  along the far side of the river. It now cantered towards Thackrey’s. 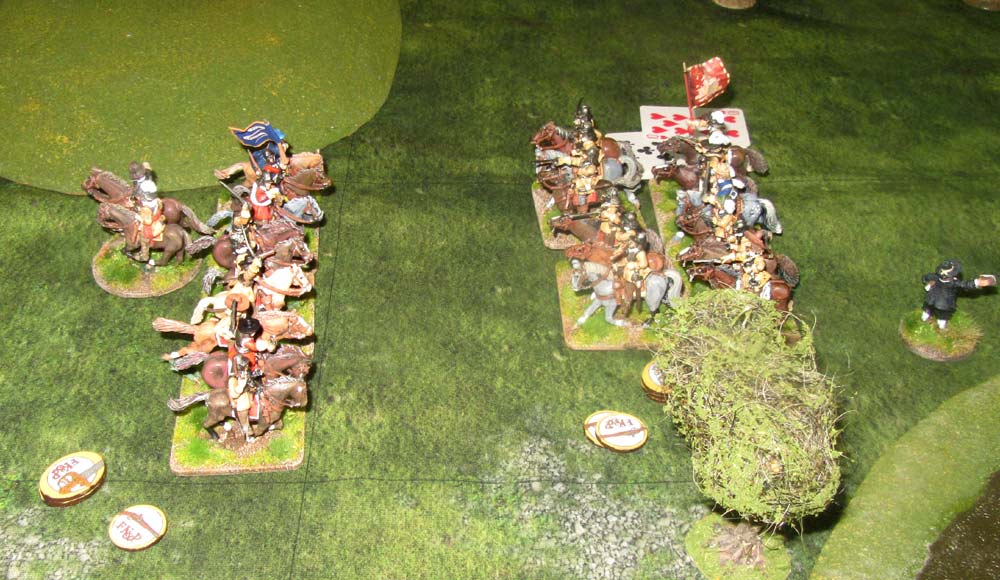 This first cavalry clash, when it came, was short, sharp and decisive. The “Dutch trained” Parliamentarian cavalry fires their pistols, and inflicted a hit on Greenwood’s, but it wasn’t enough. The Royalists charged home “in the Swedish style”, firing their pistols as they clashed. The poor raw troopers of Tobias Arkwright’s regiment were swept from the field. 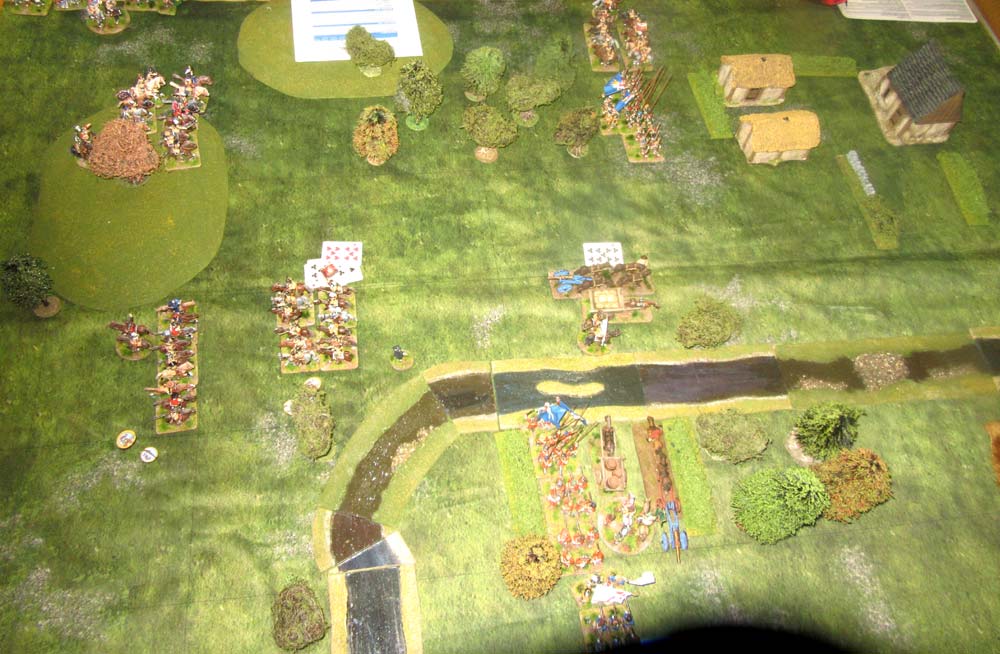 Their sacrifice though, hadn’t been wasted. It bought time for Haxby to get his siege train across the ford, and safely onto the road heading to the west. Actually, there wasn’t a road there, as I left it at home, but you get the idea. We pretended I’d remembered to bring it. By now the two regiments of foot had formed their blocking force, and now stood between the siege train and the enemy. 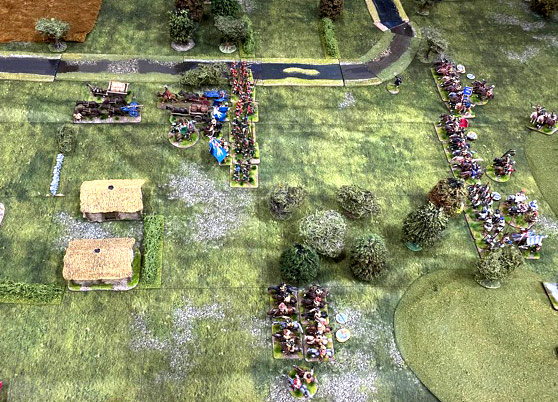 On the southern edge of the table, beyond a small wood was an equally small hill. Arkwright’s horse had ridden onto it, only to find two regiments of Royalist foot advancing up its other side. That’s the Parliamentarian cavalry at the bottom of the photo above. They fired their pistols at the Royalists, and in return faced a couple of volleys of musketry, which disordered the horsemen. 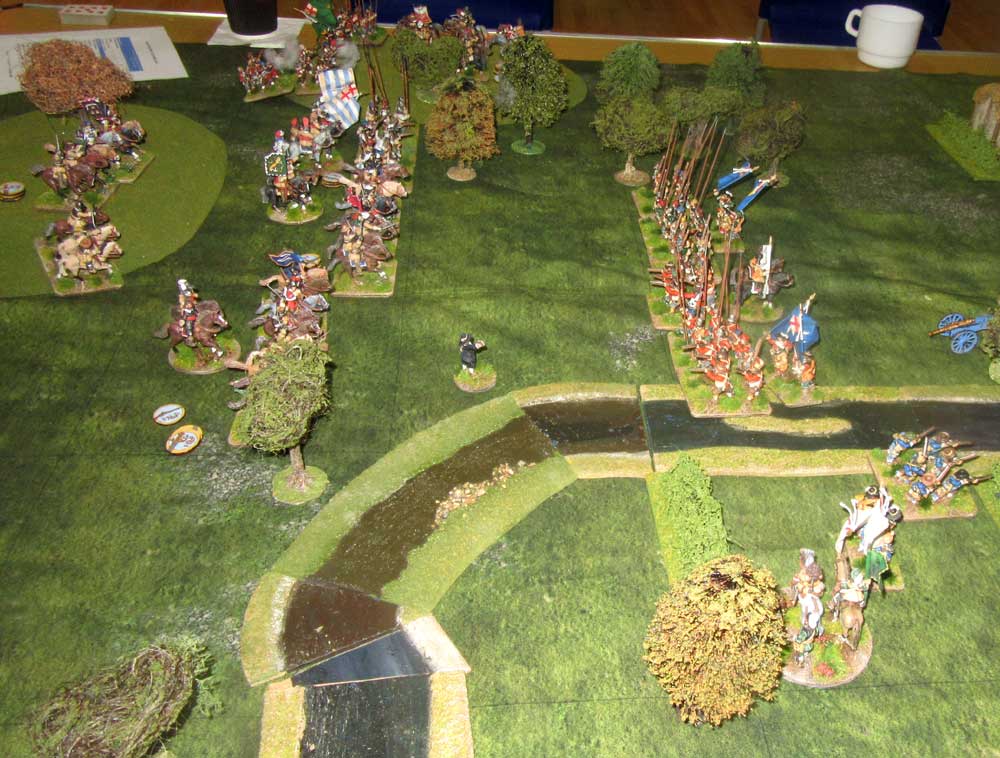 They pulled back, which allowed the Royalists to claim the hill, and then funnel troops around the flank of the Parliamentarian blocking force. In the centre the Royalist horse had effectively bene held off by the steady line of Parliamentarian foot. Now though, faced with this new threat, Nick did the sensible thing and pulled back. After all, his job was to protect the siege train. 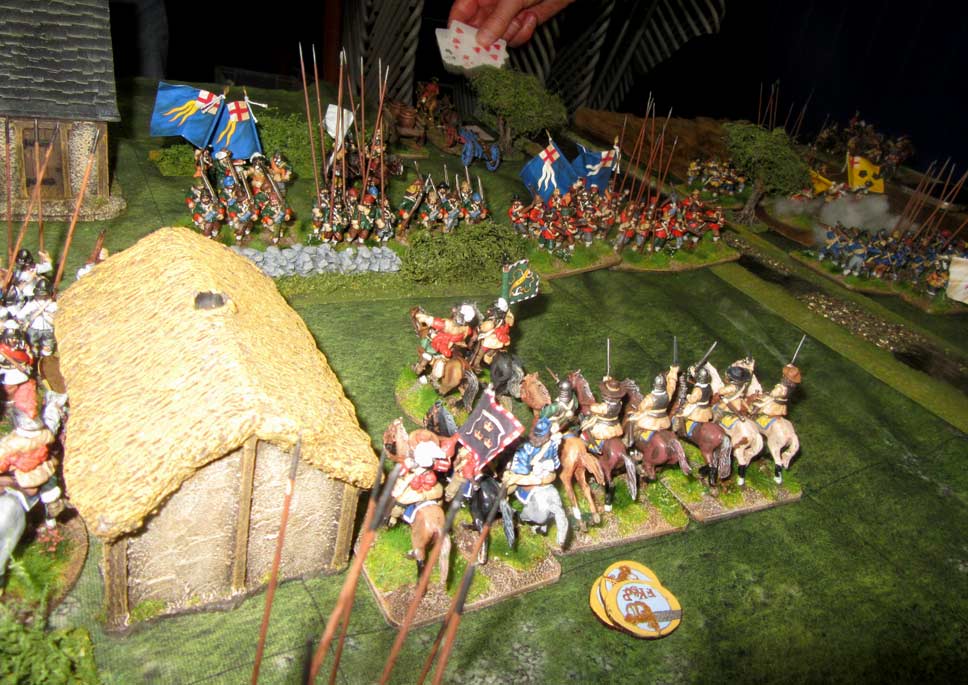 The Royalists followed, but their horse kept a respectful distance. Meanwhile, one of the foot regiments of the escort, the Scunthorpe Trained Band – had headed along the northern bank of the river, where there was another ford. Their job was to stop any Royalist attempt to reach the siege train from that side. It was just as well. Another solitary Royalist foot unit, Barraclough’s yellowcoats, had appeared in the north-west corner, having been spending the morning foraging. Now the two regiments squared off against each other on the northern side of this second ford. That though, is all they did – trading musketry for the remainder of the game. 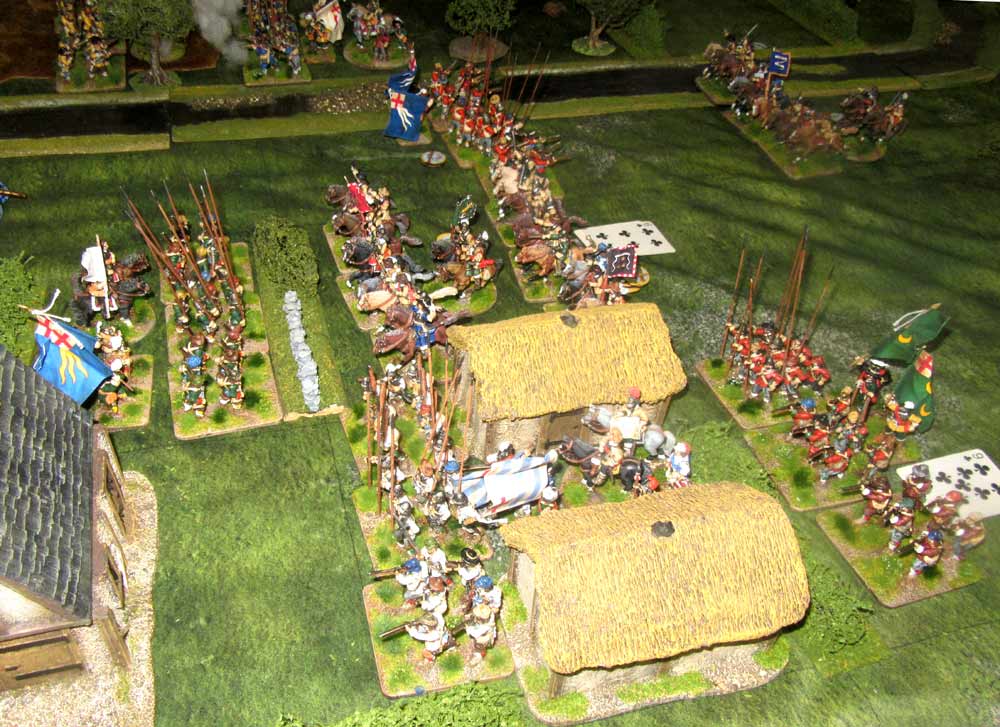 By now the Royalist foot had reached the village of Little Plodding, which was held by Fairfax’s foot. They were outnumbered two to one though, and after Arkwright’s horse had been driven back again, they were disordered by Royalist musket fire. Then the Royalists charged home. In fact, the fight didn’t go well for either side. Fairfax’s was driven out, and the Royalists of Doncaster’s foot occupied half of the village. They were badly disordered though, and a double volley from Farifax’s greencoats saw them break.

So, as the other the Royalist foot regiment  nearby – the Barnsley Trained Bands – was both raw and disordered, and with the siege train still heading off the table, it was up to the Royalist horse to save the day. Actually, all that was stopping them was Boothroyd’s regiment of foot. The charge though, when it came, ground to a halt. The redcoats stood firm and forced Greenwood’s horse to retire. Longfellow’s and Hartley’s horse swept on between Boothroyd’s and the village, only to be stopped by fire from Fairfax’s foot, safely ensconced behind a stone wall. With that the siege train trundled off to safety, and the day went to Parliament. It was a fun little game, albeit a close-run thing, and Nick seemed to thoroughly enjoy his first experience of For King & Parliament. Thanks too Nick, for the use of some of your photos! 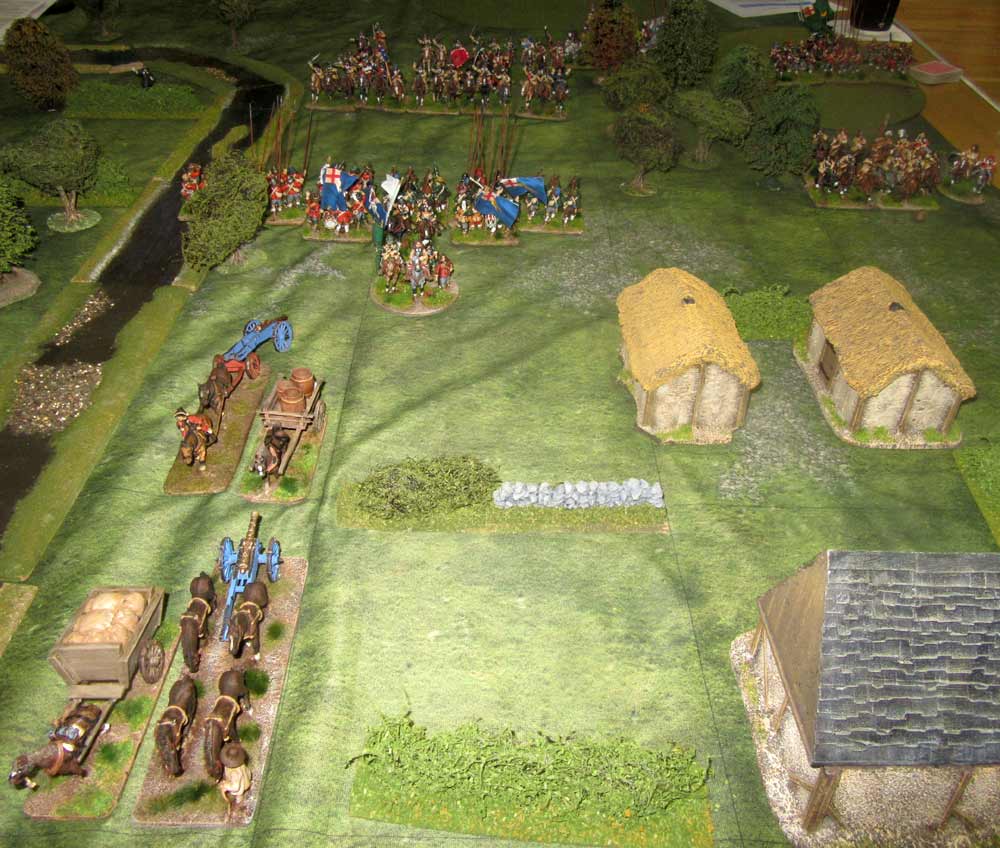